(Above: LIVE coverage from KOAA News 5.)

Fort Carson Garrison Commander Colonel Ron Fitch said the Carson Midway fire is not expected to reach I-25 and is moving east. Fitch addressed the media in a news conference at Pike Peak International Raceway at 6:30 p.m. Friday.

Fort Carson is the lead agency fighting the fire with crews from all across southern Colorado assisting. Fort Carson said the fire started on a range where aviation and infantry troops were training Friday before noon and the fire quickly spread in high winds, joining a flare up from Thursday’s fire in the Midway Ranch area. Fitch said the fire has burned about 2,100 acres and did not estimate containment.

Fitch addressed the issue of training, saying it is necessary with the high number of deployments this year.

El Paso County Sheriff Bill Elder said he hopes the fire will be out by nightfall. Two airplanes are in service knocking down the flames now that the winds have calmed down with sunset.

El Paso County emergency officials provided an update on its Facebook page, saying 250 homes are under evacuation orders in El Paso County. The Pueblo County Sheriff’s Office said 69 homes are under those orders in Pueblo County. There have been reports of structures burning. There have not been any reports of injuries or deaths related to the fire.

Red Cross Public Information Officer Bill Fortune said the evacuation shelter set up at Fountain Valley Baptist Church is not an overnight shelter at the moment. Those plans can change he said if there is a need. At this time the Red Cross is not asking for donations in relation to this fire yet.

Crews from the Fort Carson, Colorado Springs, Black Forest, Hanover, Falcon, and the Cimarron Hills Fire Departments are working to contain the flames. Fort Carson is the lead agency.

The fast-moving fire has been fueled by strong winds, which pushed the fire to the north and east, close to the landfill and toward I-25.

The Humane Society is also helping to rescue animals in the path of the fire. A large animal shelter has been set up at the Colorado State Fairgrounds in Pueblo.

Mandatory evacuations were expanded this afternoon, the boundaries are as follows: the north boundary is Donner Pass View, south is County Line Road, east is I-25 and west is Fort Carson Route 1. 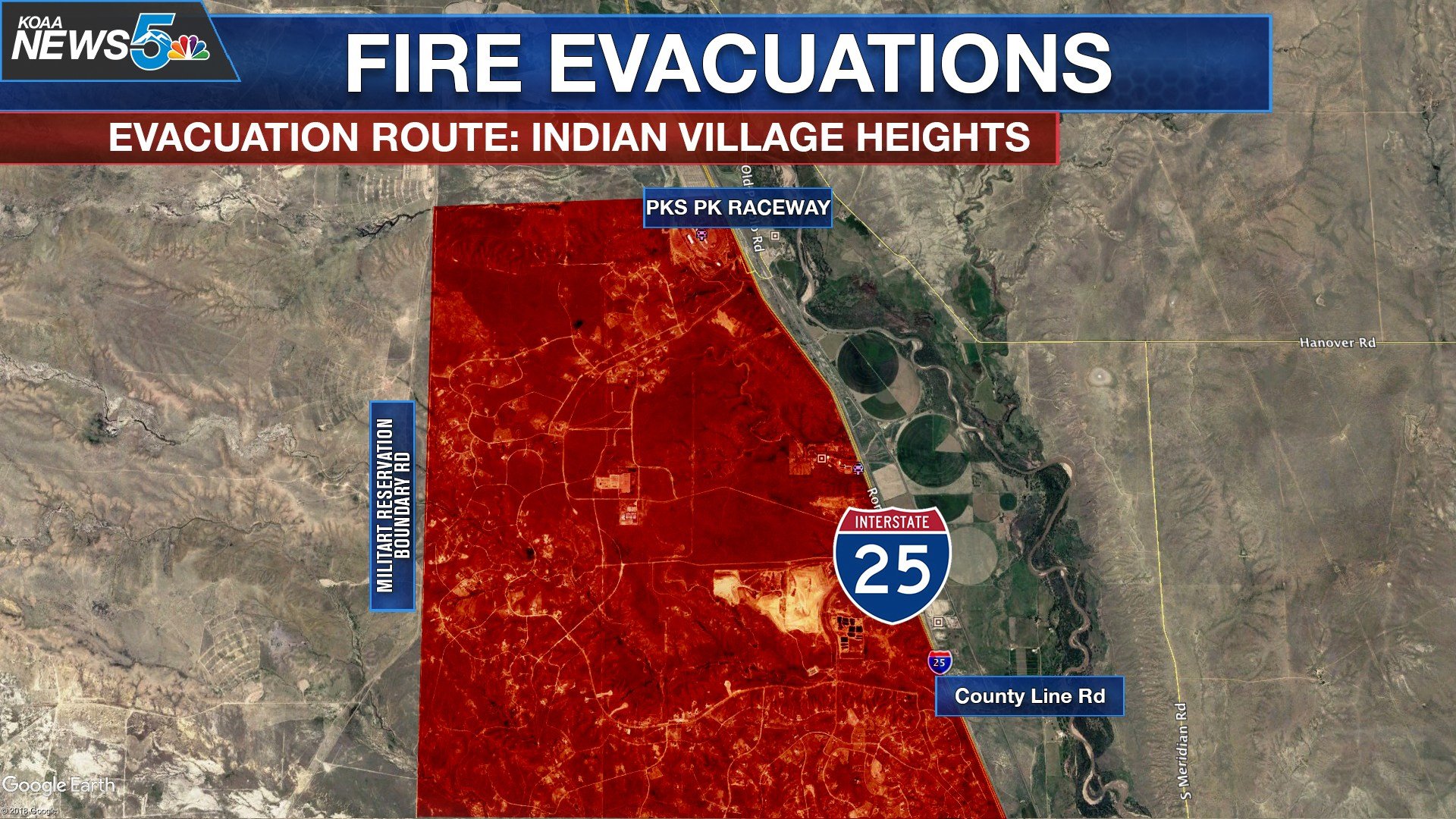 The Hanover School District said parents can pick up there children at the high school and that all afternoon activities have been cancelled along with afternoon preschool.

There is an air quality health advisory for northeastern Pueblo County as well as southeastern El Paso County until 8 p.m. Friday night.

We want to remind viewers that today is a Red Flag Warning day due to high winds in the area. No outdoor burning is allowed.