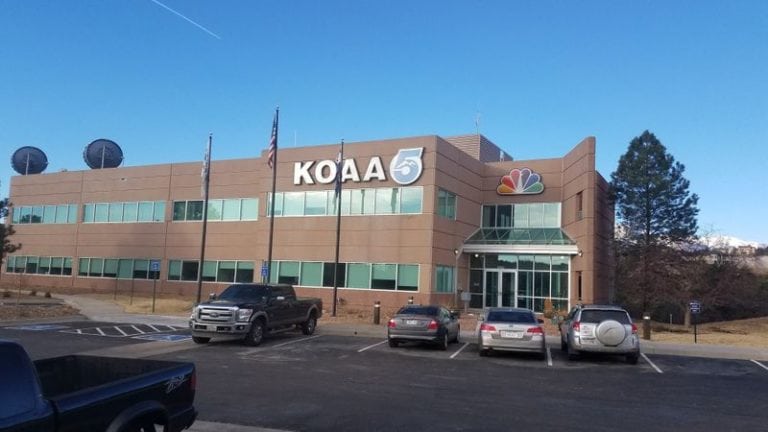 KOAA5 is the local NBC affiliate, and news leader, in Southern Colorado. KOAA5’s state of the art studio is located in the Colorado Springs Tech Center off Rockrimmon Road. Colorado Springs is one of the fastest growing cities in the country and is consistently ranked among the top 10 places to live.

Coverage
KOAA5’s market area is BIG; covering over 30,000 square miles and 12 counties. KOAA5’s broadcast tower is located at the top of Cheyenne Mountain in Colorado Springs. The station’s signal reaches the borders of Kansas, Oklahoma and New Mexico. To the north the signal extends to the edge of El Paso County and Fremont County to the west. With over 1,000,000 local viewers, 3 out of 4 viewers tune in to KOAA5 each week.

A brief history
KOAA5 has been on the air since June 29, 1953 with studios located in Pueblo, Colorado under the call letters KCSJ. Eight years later, the owners of KOA-TV in Denver, Colorado purchased KCSJ and changed the call letters to KOAA.

In 1969, KOAA5 became the first station in the region to broadcast in color, and it expanded its operations into daily news coverage. Then in the 1970s, as Colorado Springs was booming, KOAA5 saw its popularity grow substantially in the northern viewing area, and especially in El Paso County. In November 1977 KOAA5 was purchased by Cordillera Communications and soon after the station’s Colorado Springs facility was established. KOAA5’s Eyewitness News became the top-rated newscast. In the era of growth, KOAA5 established itself as a champion of the community by supporting local outreach organizations, digging into far-reaching investigations and by providing vital information during emergency situations.

In 2014 the station invested in a new state-of-the-art broadcast facility in Colorado Springs Tech Center. KOAA News5 continues to be the dominant #1 news provider in Southeast Colorado and delivers critical information to its primary broadcast channel, all digital media platforms, and a secondary broadcast channel called News5 Now.

In September 2020, KOAA-TV expanded news coverage to southern Colorado with the addition of an hour-long News5 at 4pm. The news team you know and trust bring you Southern Colorado’s top-rated newscast one hour earlier.

You can also now find Newsy on channel 5.5, the country's only free, 24/7 over-the-air news network. Newsy elevates the stories of those affected by the news - establishing an emotional link for our viewers with the real people and places at the heart of our coverage. Rooted in fact-based, transparent reporting, we're relentlessly focused on "the why" of every story and seek to enable a more intimate and immersive understanding of the issues that matter.

KOAA News5 focuses on in-depth storytelling and News5 at 4 builds on that strength for unique local coverage. The mission of this newscast is to give voices to every walk of life in our diverse community - while staying on top of all our breaking news and weather.

Scripps local television stations serve a crucial role as watchdogs of the powerful; a source of comfort in a crisis; and a place to turn for everyday information. We engage large local audiences with the news and information they need to make decisions for their lives – and we make it easy to access our award-winning journalism on every platform, from television to desktop and mobile to streaming platforms.

We also provide a path for powering local economies. Our programming allows advertisers to be adjacent to objective, reliable information and to associate with venerable local news brands. We help them create ad campaigns to broaden their businesses’ reach and build their customer bases.

However we deliver news and information, today and in the future, Scripps-owned KOAA5 remains committed to the audiences and communities it serves, staying true to its motto since 1923: “Give light and the people will find their own way.” KOAA5 remains firm in its role as community champion. The station remains the first choice for viewers and users, no matter what the platform, we are THE station that is Always Watching Out For You.

Court TV HD (Coverage of Today’s Most Popular Court Cases) can be found:
Over the Air – KOAA 5.2

Court TV Mystery (True Crime Coverage) can be found:
Over the Air - KZCS 18.1

Laff (Comedy Programming Featuring Sitcoms and Movies) can be found:
Over the Air - KZCS 18. 3
Comcast - 368

Visit our Contact Us page for specific information per department or issue.