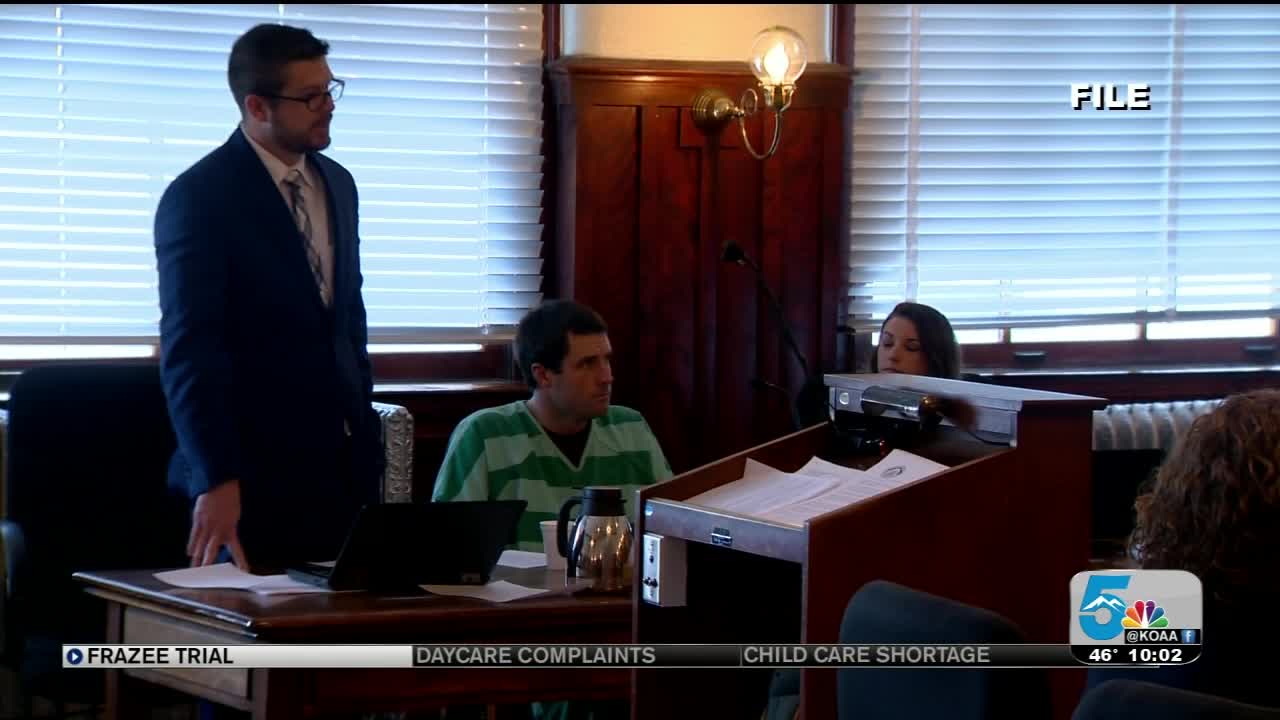 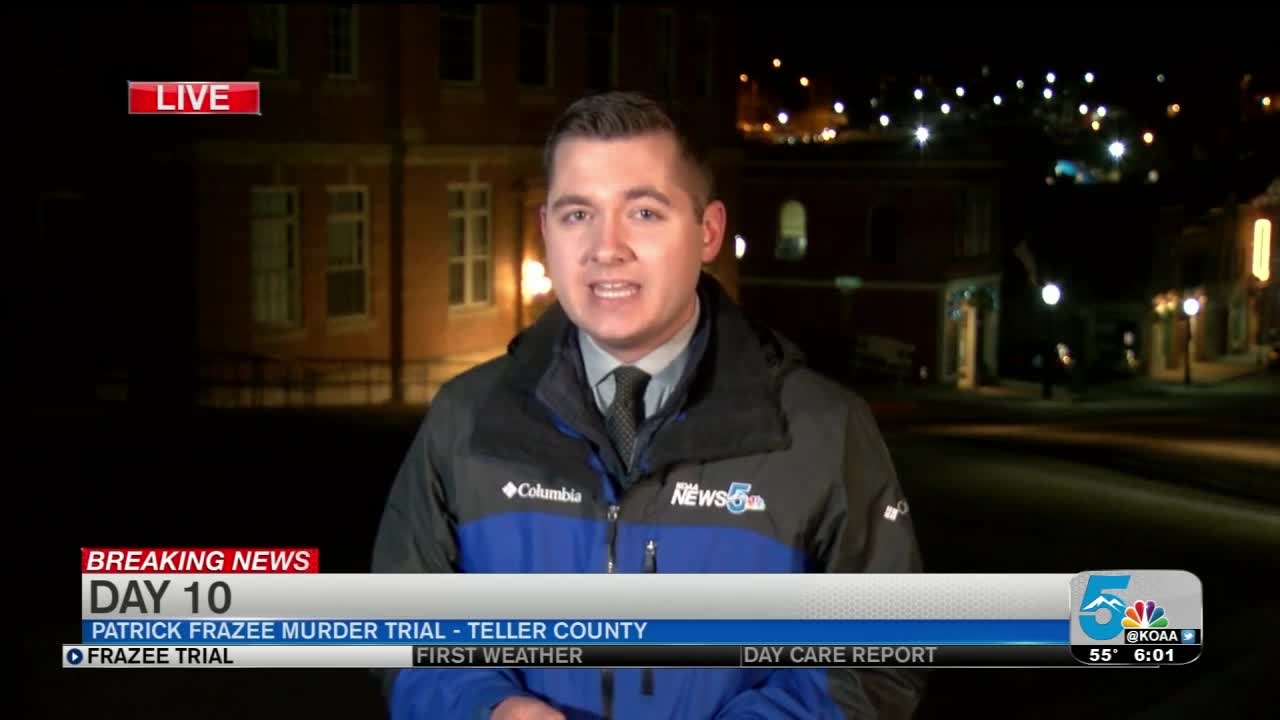 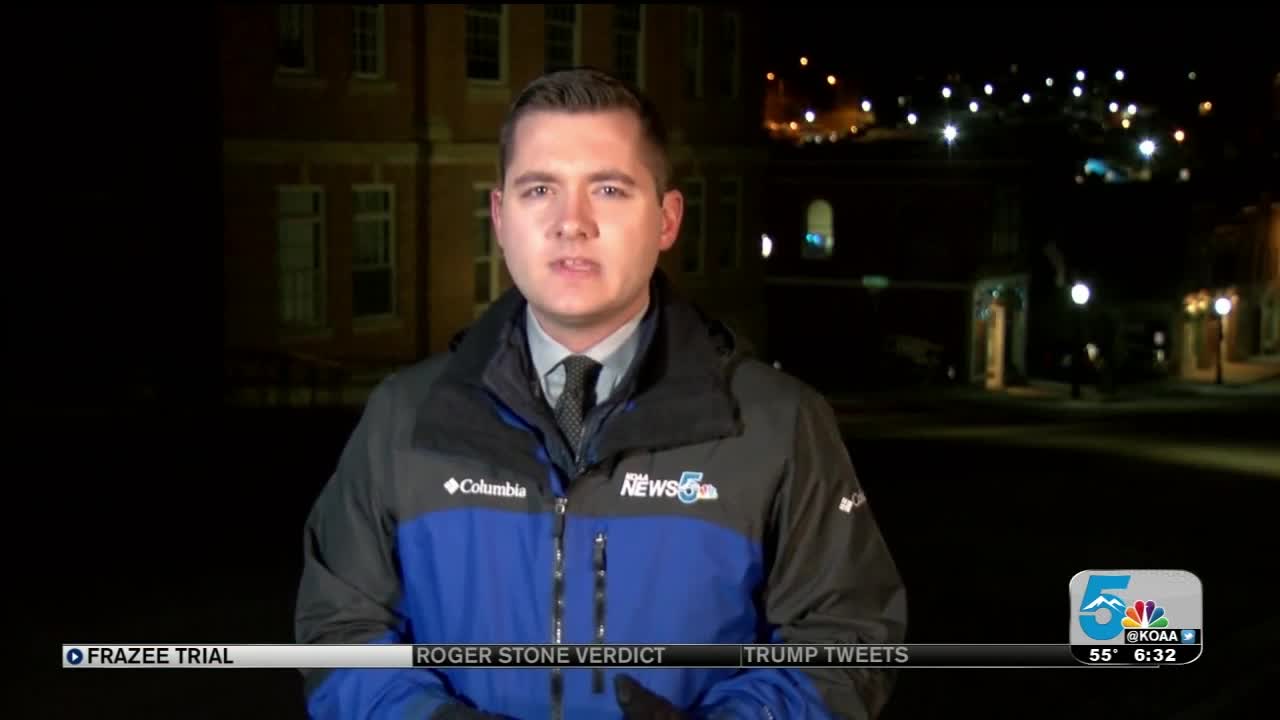 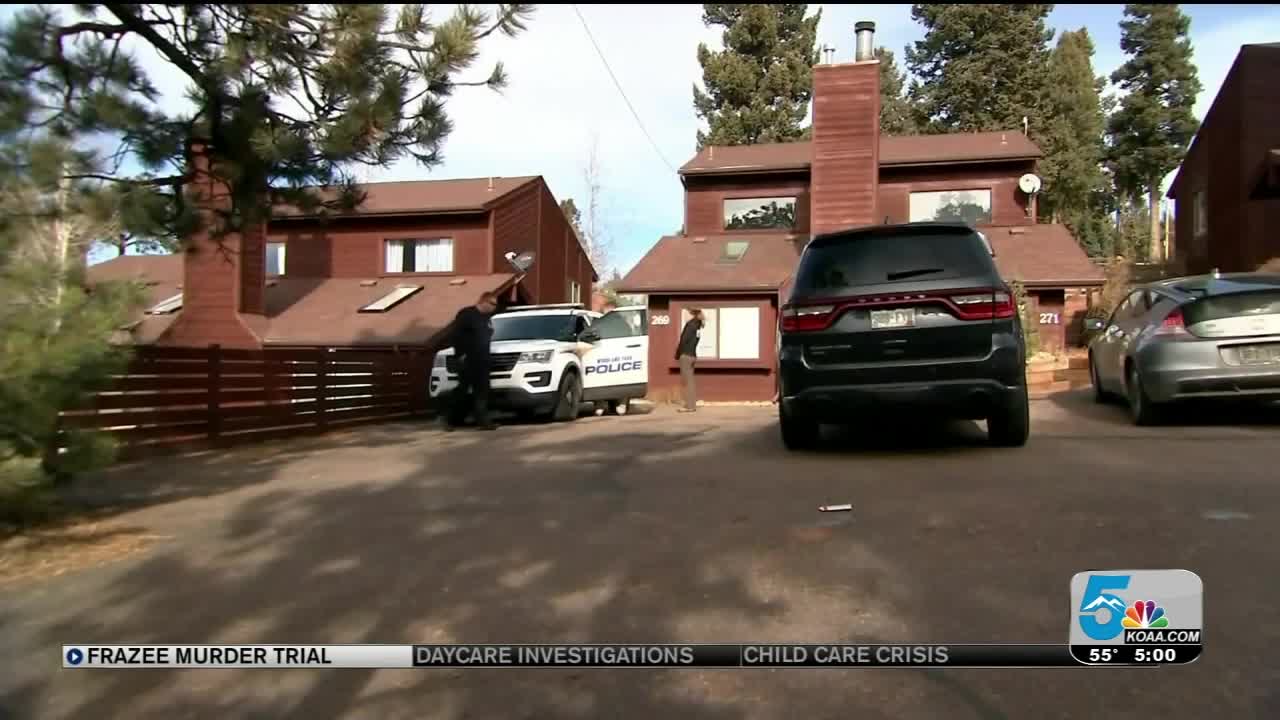 TELLER COUNTY — We now know closing arguments in the Patrick Frazee's murder trial will begin on Monday as the prosecution wrapped up their call for witnesses and the defense rests without calling any witnesses. One of the final witnesses called by the prosecution is a man who was being held in the Teller County Jail at the same time as Patrick Frazee. He claims Frazee asked him about helping to kill Krystal Kenney, considered the key witness in the case.

Before proceedings wrapped up today, Frazee was reminded by the judge he has the right to testify in his own defense or remain silent. He replied, "I will remain silent." The defense also made a motion for one of the first-degree murder charges to be downgraded to second-degree murder or manslaughter, citing case law on a lack of definitive evidence, no cause of death, the majority of the prosecution's case resting on Kenney's testimony,and a "reckless state of mind."

The prosecution rebutted the argument of recklessness with the following, “There’s nothing reckless or negligent about this. He wasn’t re-enacting the World Series and accidentally hit her..... He went to swinging," said Jennifer Viehman. She says there’s strong evidence to support first degree murder.

The judge called for a recess to consider the motion then returned with a ruling that if the jury does not convict on first-degree murder they can consider second-degree murder or manslaughter. He stated the defendant is not entitled to a lesser charge of criminally negligent homicide.

As cameras, live tweeting and live blogging are not allowed during these proceedings, all of the information from the courtroom is drawn from extensive notes made by News5's Sam Kraemer. Follow his updates online and on-air on News5 at 5, 6 and 10 p.m.

For more of our coverage from the beginning of Kelsey Berreth's case, you can click here .

Agent Greg Slater with the Colorado Bureau of Investigation is called to the stand again. He says he learned of John Doe's existence last Saturday.

Prosecutor Beth Reed submits copies of the letters for Slater to verify the contents and meaning. The first letter asks if Doe knows where to find Kenney, Chad Lee, Michelle Stein, Joe Moore and Wendi Clark. It says they all need to disappear unseen until at least Nov. 22 after the trial.

Reed asks Slater if he's familiar with Sheila Frazee's home and cell phone number. Slater says that information is in the letter and that those named in the letter were endorsed witnesses to the case.

Reed also asks if Slater is familiar with Frazee's handwriting and that the handwriting in the letters are consistent with Frazee's. Some letters were typed or written on napkins and paper towels. One letter lists members of Kenney's family and where they may live now. Others describe what the witnesses look like and how Doe could possibly kill them. Prosecutors went through the letters and had Slater confirm who the descriptions were about.

Here are excerpts from the notes entered as evidence.

Inmate says Frazee asked him to kill Kenney, other witnesses

Prosecutors called a former fellow inmate who was housed with Frazee at the Teller County jail. News5 is withholding the name of the inmate at the request of the District Attorney's Office for the witness' safety. He will be identified as John Doe.

Doe said he met Frazee in jail between Sept. 26 and Oct. 12. He says he spoke with Frazee to ask him if he could get items for him from the commissary if he gave him money. He says Frazee was curious about prison and his time there. Doe says they were both curious about each other's case and that Frazee was concerned about Kenney's upcoming trial.

Frazee then asked Doe if he could do something to impact her. Doe says Frazee told him he'd help him bond out of jail if he could help Frazee eliminate witnesses.

Doe says he wanted him to kill Kenney and other unnamed witnesses. When Doe is asked, he says Frazee asked more than once to "take care of a witness."

Copies of a letter Frazee wrote to Doe is presented in the court. Doe says Frazee wrote around 16 letters total.

Doe says described how to "carry out the hit" on witnesses and shared names, phone numbers and addresses. Doe says he has heard of people's names on the list, including Kenney and Michelle Stein.

Attorney Adam Stiegerwald asks Doe if he recognized Frazee before arriving to the the jail and he says yes. Stiegerwald points out Doe had a subpoena Tuesday where he met with a Colorado Bureau of Information agent.

Prosecutor Beth Reed on redirect asks why Doe came forward. He said at first he was looking for a plea bargain, but learned his charges were dropped to a misdemeanor. He says he was torn on coming forward but decided it was the right thing to do.

Testimony in the case opened up Friday morning with Jonathyn Priest, an expert in blood pattern analysis. Priest is a 32-year veteran of the Denver Police Department and now works in a private capacity.

His examination of the evidence and presentation with the prosecution is all about explaining what type of murder scene you can expect based on what investigators know about the blood spatter found and described by Krystal Kenney.

Priest explained he was given all of the available evidence in the case and confirms the tiny drops of blood across the home are consistent with a large force upon a blood source.

Priest says the more force applied to a liquid, the more dynamic the reaction is of that liquid. If he strikes a blood source, he’s going to create much smaller stains. If he just cuts his finger and lets gravity work it’s magic, it will create a larger drip stain. This principle applies the same way to other liquids. He says spatter refers to drops of blood — and in this case, he says they’re small because they were subject to a large force.

The prosecution then played body cam video of Krystal Kenney walking investigators through Berreth's townhome, explaining what she saw when arriving for a cleanup effort she says Frazee told her to carry out.

In the recording an investigator asks Kenney about the scene, "When I first walked in, I saw blood all over the floor. I saw blood on the wall. I saw blood on this wall...” Kenney goes on to explain putting her protective gear on before picking up and disposing of blood stained items and finding blood on the fireplace, the baby gate, bloody footprints on the floor, wiping down the toiler, the shower, the dishwasher, stove, tin foil on top of cinnamon rolls, blood above the kitchen cabinets, and on the tops of the walls.. Priest explains blood this high up is indicative of "cast off" during the backswing of a blunt weapon being swung at a victim repeatedly.

Kenney also explained a blood stain in an arc which Priest says is consistent with an impact pattern. She further explains cleaning up drapes, blood on photos and frames, blood all the way around the couch and taking care of cookie cutters, per specific instructions from Frazee.

At the end of this 15-minute presentation, Darrell Berreth has buried his head in his hands. He looks to be struggling with processing this. He was crying and wiping his eyes in the courtroom.

The questioning of Priest continues with a look at floorboards and the baby gate reviewed previously, he confirms prior testimony that what he sees is consistent with blood.

District Attorney Dan May asks Priest if he’s seen the black tote said to be similar to the one Frazee burned and asks if someone could fit a human body inside that box. Priest says "oh definitely."

May asks about Berreth’s exact stature - 5’3” and 110 pounds. He says "yes, small people fit into small places." May pauses to ask Darrell Berreth if he’s okay before proceeding.

Before heading to break Priest is asked if the evidence he's seen is consistent with a bat being used as a weapon. He tells the court the blood pattern suggests a minimum of two strikes on the victim.

Given the description, he estimates between 10 to 15 strikes, if not more. May asks about evidence of Berreth saying “please stop,” and is that indicative that the first blow didn’t kill her. “In my experience, people aren’t easy to kill,” Priest says.

“There’s nothing here that tells me this death was accidental. This is very consistent of a homicide,” Priest says.

After the break, the defense runs through the report Priest filed on Sept. 18, 2019. Attorney Ashley Porter asks if most of his report relies on Kenney's interview and he responds it is a combination of her description, the documented photos and lab results along with his expertise.

Porter asks Priest if he did not hear Kenney's testimony, "you probably wouldn't have as detailed as a report." Priest says he would have come to similar conclusions based on the blood pooling on the floor, but pointed out Kenney's testimony helped.

May asks Priest on redirect if he saw anything inconsistent with the description Kenney gave of the scene and he replies no. He also said the cleaning and blood on the couch was consistent with Kenney's story.

We will be updating this timeline with information from each testimony as the trial continues.