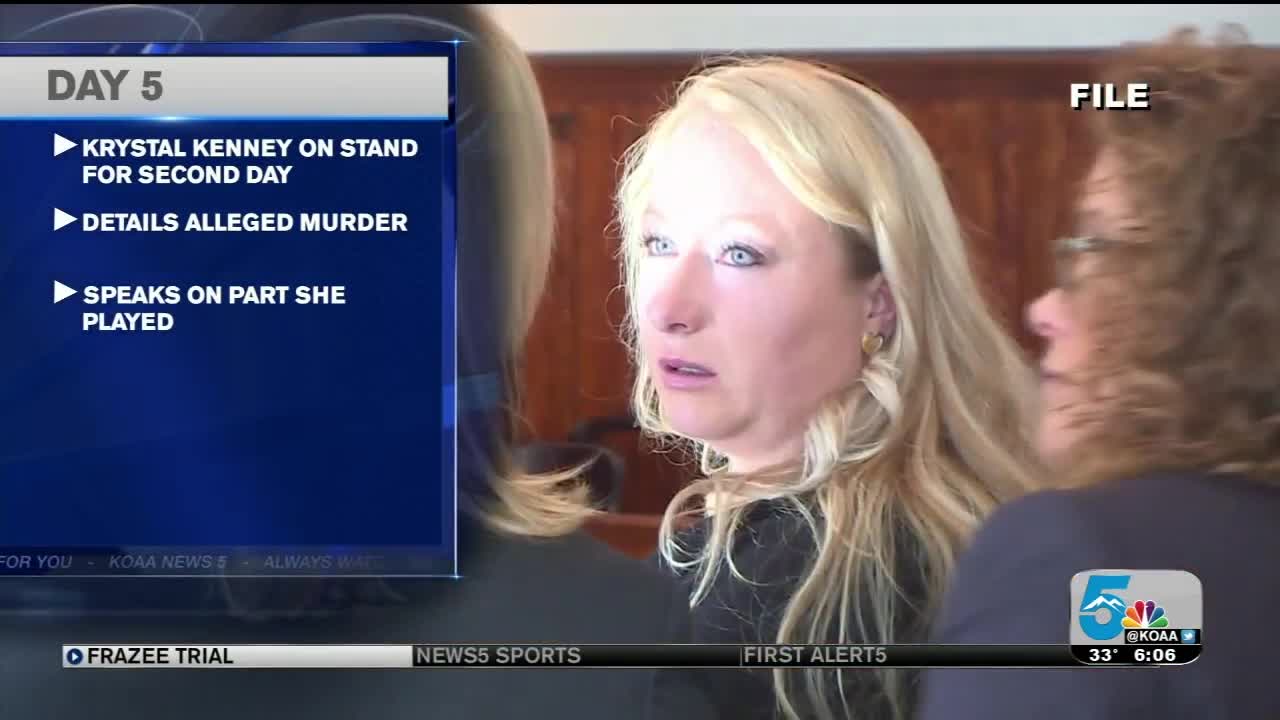 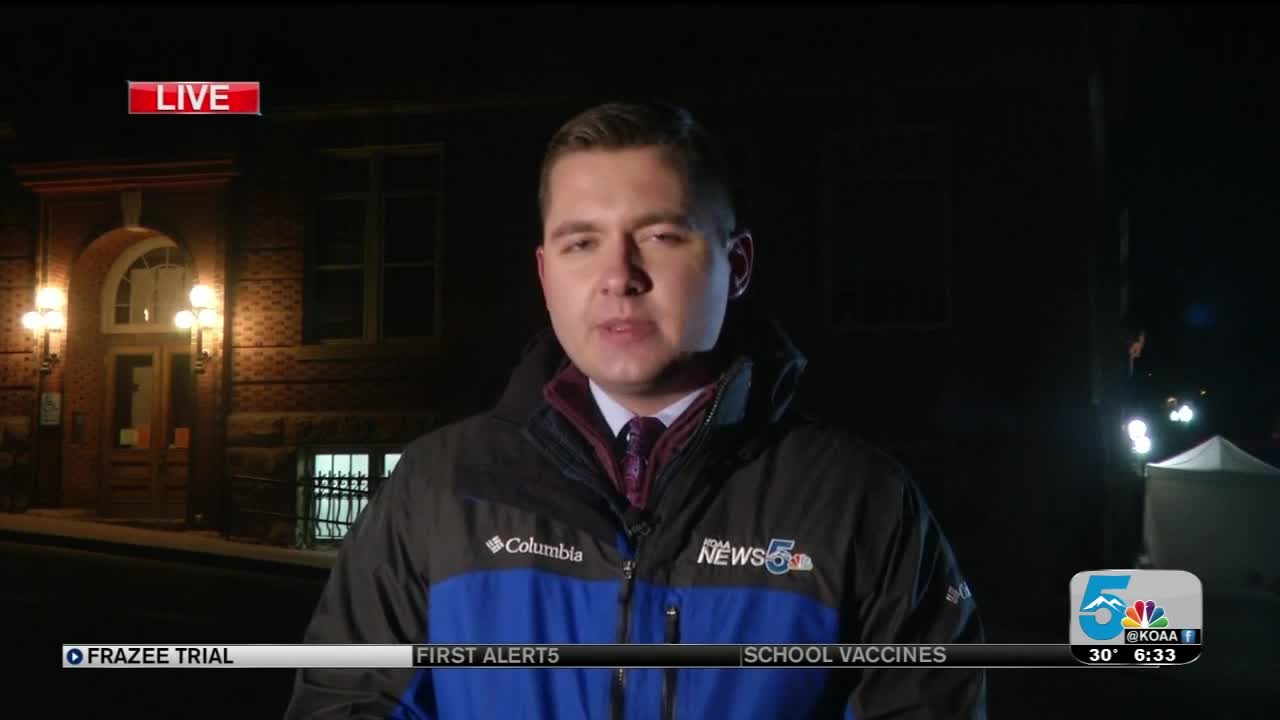 TELLER COUNTY — Krystal Kenney is set to retake the stand in Patrick Frazee's murder trial Thursday morning following a day of testimony that included her detailing how she helped clean up a gruesome crime scene inside Kelsey Berreth's home.

She told the court Frazee told her to kill Berreth with a poisoned coffee, metal rod and baseball bat on separate occasions. Kenney said she could not carry it out and was threatened by Frazee as a result. On Thanksgiving Day 2018, she says Frazee was "rattled" when he called to tell her she had a mess to clean up. Today the defense is expected to question Kenney on her account and role in this case.

(Editor's note: Kenney says she no longer goes by her maiden name of Kenney and now goes by Krystal Lee. For clarity purposes, we will continue referring to her by Kenney).

As cameras, live tweeting and live blogging are not allowed during these proceedings, all of the information from the courtroom is drawn from extensive notes made by News 5's Sam Kraemer. Follow his updates online and on-air on News5 at 5, 6 and 10 p.m.

Kenney under cross examination by the defense

As Krystal Kenney continues her testimony, a prosecutor in the case talks with her about the plea deal to make sure the jury understands the situation. Kenney confirms the deal is she plead guilty to a felony charge of tampering, is required to remain silent about the case except under oath, and faces from zero to three years in the prison when sentenced. That sentence could be probation as well.

Under questioning from the defense, Kenney is told she plead guilty to the lowest level of felony in Colorado, while not admitting guilt in cleaning up a crime scene, getting rid of belongings and destroying possible evidence. Kenney says she did not. The defense says any of those could have involved a sentence of 18 months in jail.

The attorney also mentioned there were no charges related to potentially bringing a poisoned coffee to Berreth, which he says could be considered attempted murder. Kenney did bring a coffee to Berreth that was not tainted with drugs.

Attorney Adam Steigerwald points out Kenney never took the opportunity to warn Berreth about what Frazee was trying to do, that she never said anything to her husband, police in either state, or her family. He's raising doubt about whether Frazee truly had so much power over her to maintain her silence and cooperation, as she's testified so far.

“For two days, this horrible mess just sits in Kelsey Berreth's apartment, and you don’t tell anyone about that,” Stiegerwald says. “You brought a hairnet. You brought a box of rubber gloves. You brought shoe covers. You brought a suit. You brought cleaning supplies,” he says, questioning her about the level of preparation made before making the long drive from Idaho to Woodland Park.

Throughout a long rehash of all the things Kenney admits she's done and lies she's told, Steigerwald asks if she's said the truth at all in the 10 hours of testimony she's provided. Kenney replies, "yes." He says it’s what she needed to say to avoid prison. At this point Steigerwald ends his questioning.

On redirect by the prosecution, Jennifer Viehman asks Kenney if she knows that abandonment is a defense under Colorado law. This is in relation to three solicitation for murder attempts that Kenney says she ultimately backed out of.

Kenney confirms she only spoke to law enforcement during a visit to her home because she finally felt they would believe her and she felt safe from Frazee. She also says she never told anyone because she did not want anyone else to get entangled or in danger.

Kenney says she intentionally left spots of blood and other evidence because she wanted to be caught.

Kenney goes over burn pit used to get rid of evidence

Krystal Kenney returned to the stand this morning after a delayed start. Judge Sells said both Patrick Frazee and Kenney were feeling ill this morning, so court began later than usual.

Lead Prosecutor Jennifer Viehman brought up Kenney's plea bargain she made last December to start. Kenney told Viehman when investigators first came to her home on Dec. 17 last year, she wanted to cooperate but didn't provide a statement until Dec. 20.

She said she wanted to provide the statement because she couldn’t live with what she knew and she thought Kelsey Berreth's family deserved to know what happened.

Prosecutors submitted photos as evidence this morning that showed various areas in and around Berreth's townhome. Kenney got emotional while looking through the photos.

Kenney described to the court how the blood looked when she arrived to help clean up the scene and what was covered in blood at Berreth's home. She also said it took her about four hours to clean the blood and that she used cleaning supplies already in the home.

Kenney was asked if Frazee said where Kaylee was when it happened and she said Frazee told her Kaylee was in the back room when he hit Berreth with a baseball bat.

As each photo was shown showing different parts of Berreth's home, Kenney explained how she cleaned things and what she did during the four hours. Kenney said she bagged up trash bags filled with her own clothes after she was done cleaning along with some of Kaylee's toys, books and other items she said she could not remember.

Kenney said she went to Frazee's home afterward and spent three to four hours there before returning to Berreth's home to send a text using Berreth's cellphone.

Next, the court saw body camera footage from Dec. 21 last year when Kenney took police to the Frazee Ranch and led them to Nash Ranch, where she said the trash bags and black tote were burned in a fire.

Kenney described in the video what the container looked like: a black plastic tote with clasps and a hinged lid.

She also points out to investigators where Frazee's truck was parked and where he unloaded the tote the night the evidence was burned. Kenney said she was present when Frazee started the fire.

The video was paused for a 5-minute jury break after Judge Sells said he received a report of someone drawing a sketch. Prior to the trial starting, Sells denied the use of a sketch artist.

The man was called up to the stand and said he was just doodling, but the judge directed deputies to rip out the sketches from the man's notebook. His notebook is returned to him, but Sells said he is keeping the pages until the end of the trial and that the man can ask for them afterward.

"I don't want you drawing anyone in this courtroom," Sells said. He also said he will not tolerate any picture of jurors or witnesses.

The jury is brought back in and more deputies enter the courtroom to keep an eye on the audience. The body camera footage is playing again.

In the video, Kenney describes the wood pile area, pallets, logs and scrap metal in the area. She said she got wood for the fire.

Kenney took investigators to a trailer on the property where she said there was a red gas can Frazee used to accelerate the fire and used one match to light it.

She said she left so she didn't see it after the burn.

While Frazee was starting the fire, Kenney said his mother Sheila Frazee came outside and looked at the fire from the deck. She said Sheila came a little ways to look.

The court heard from a handful of police officers, special agents and Frazee's brother, who described Thanksgiving Day at the family ranch Tuesday.

Sean Frazee, the defendant's brother, testified that he and his siblings are still in a legal battle for their late father's assets with an estimated value of $400,000.

Combine that with documents seized from the Frazee Ranch showing Patrick essentially defaulted on a $70,000 loan, and other papers showing a possible custody arrangement, a picture emerges of money problems. For more on his testimony and the other testimonies from Tuesday, click here .
________________________________
Along with Kenney's testimony Wednesday, the court heard from a FBI Special Agent who went over the phone records of Berreth's, Kenney's and Frazee's cell phones. Click here to read the testimonies, include Kenney's, from Wednesday.

Berreth's brother, Clint, explained how he found the blood on the underside of the toilet in her home. This turned the investigation from missing person to homicide. You can read more on his testimony and the rest of the testimonies from Monday here .

Click here to read opening statements made by prosecutors and the defense.