CAÑON CITY – Kris Ray’s two young pit bull mixes were just puppies when she rescued them a few months ago. They’d been abandoned at a cemetery. Twice this spring the pups have returned the favor by scaring mountain lions up in her yard up into trees.

The lion that showed up on Wednesday was an adult male, weighing about 120 pounds. She called the sheriff who dispatched Colorado Parks and Wildlife Officers to remove him from the tree. 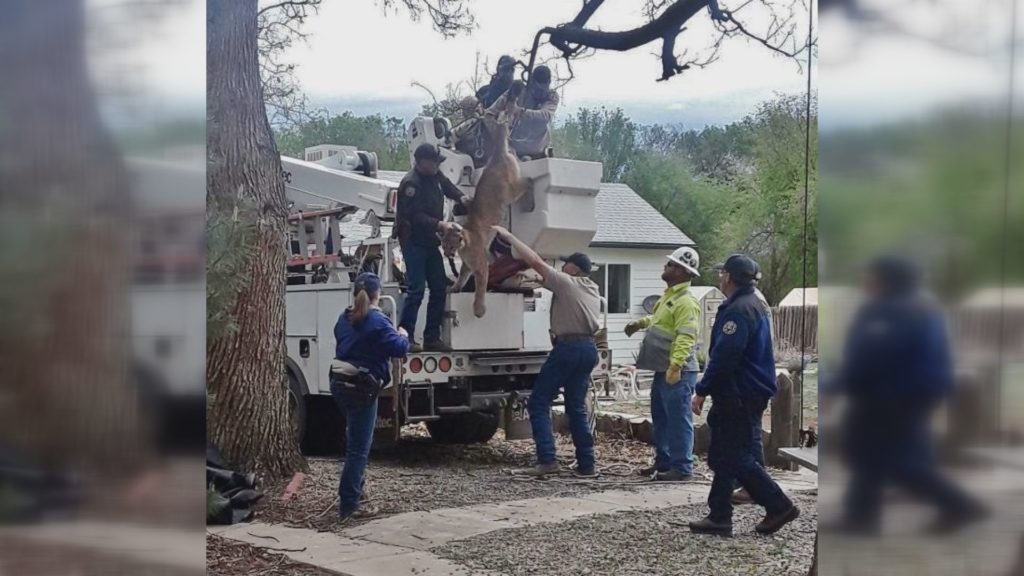 “It was amazing how they tranquilized that thing, just one little shot and then bam!” she said.

Zach Holder, the Division Manager for Colorado Parks and Wildlife for the Southeast Region said the animal had climbed about 30 feet up into the tree. He asked Black Hills Energy to send a bucket truck to help remove the big cat.

“The position that it fell asleep in, we were concerned that it might fall out of the tree. So, we quickly got the bucket truck up in the air,” Holder explained.

The tranquilizer wasn’t strong enough to overcome the cat’s adrenaline.

“It started hissing at the wildlife officers on the ground, pinned its ears back and when they grabbed it and put it on the ground to put it in the bear trap that we had, he tried to get away from them.”

They eventually wrestled him into a trap, but two officers were hurt in the process. The lion scratched one on the leg and bit the other on the arm. Holder says the wounds aren’t serious.

“I think one individual might have had to go get a tetanus shot just as a precaution, but you know, that’s something that wildlife officers deal with on a daily basis.”

Mountain lion activity is becoming more common in Canon City. Holder explained that there is an overabundance of mule deer in the area and it’s attracting predators like the mountain lions.

CPW is working with local officials to hold an urban deer hunt here in the fall to lower the risk. In the meantime, they’re urging neighbors like kris to be cautious as they head outdoors.