COLORADO SPRINGS – El Paso County Sheriff Bill Elder believes the red flag bill being debated in the state legislature stomps on the civil rights of Coloradoans. It not so much the infringement of the Second Amendment rights that he’s worried about. Instead, he believes the bill violates Fourth Amendment protections against unreasonable search and seizure and Fourteenth Amendment protections of due process. 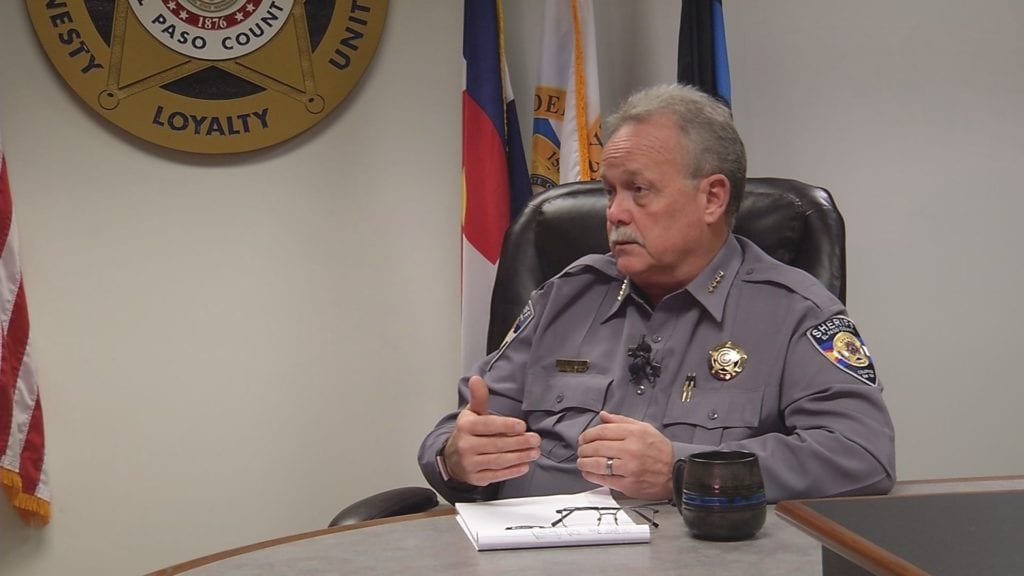 El Paso County Sheriff Bill Elder explains to reporters his opposition to House Bill 19-1177, the Extreme Risk Protection Orders.”We’re going to be taking personal property away from people without having due process,” Elder said.

House Bill 1177 creates what are called Extreme Risk Protection Orders. If it passes, relatives or law enforcement officers could ask a judge for a court order to temporarily remove someone’s guns if they’re suffering from mental illness. Elder points out that it is not a crime to be mentally ill. However, the bill uses the tools of our criminal justice system to conduct gun removal.

When someone petitions the court for an Extreme Risk Protection Order, the initial hearing is conducted ex parte. Elder explained that gun owners would only learn that order was granted against them when the deputies show up on the doorstep to execute the court order. He believes the law could easily be abused and will likely lead to dangerous confrontations between armed individuals and law enforcement.

He wants gun owners in unincorporated El Paso County to know he doesn’t plan to pursue ERPOs on his own.

“The Sheriff’s Office isn’t going to run over and try to get a court order,” Elder said.

However, he points out that if a judge grants an ERPO to a family member, then he can’t really refuse it.

“The fact of the matter is, we support the rule of law,” Elder said. “And if a judge issues an order of the court, then it is up to law enforcement to execute that order.”

Like Sheriff Elder, he sees many flaws with the ERPO bill and said his county may join a legal fight against it.

“If it’s signed by the Governor, we haven’t made a decision yet, but we may challenge the law in court.”

Commissioner Steen wanted to make it clear that Teller County’s resolution is not a sanctuary declaration.

“Our thought was the term sanctuary was too narrowly defined, it carries a lot of baggage and its not really helpful,” he said.

Elder fully expects the bill to pass and he anticipates that El Paso County will lead the legal challenge against it.

“Our job is going to be to put that in front of a judge of competent jurisdiction to stay the development of that as a law in January until it can be reviewed and have, hopefully, the Colorado Supreme Court review it and decide whether or not it’s constitutional “