Poor driving conditions across the region as winter weather arrives

COLORADO – Heavy snowfall across Southern Colorado is creating a very rough drive for many. Conditions have deteriorated so much the Colorado State Patrol is advising anyone who chooses to travel north or south on I-25 should have a full tank of gas. Yes, the delays are that bad.

The Colorado Department of Transportation reports extremely long delays on SB I-25 due to multiple crashes in the Gap area between Greenland (Exit 167) and Monument.

The use of alternate routes like Highway 83 are highly encouraged. But keep in mind it  is also clogged with traffic and moving slow.  Highway 105 west of Castle Rock is closed due to a jack-knifed semi. 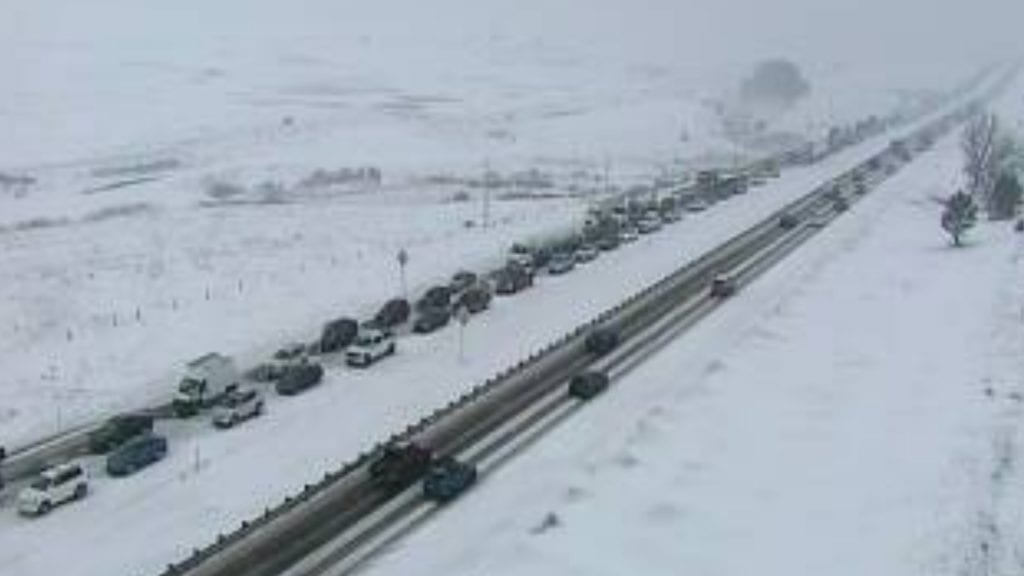 In El Paso County, Baptist Road heading into Black Forest is a mess as multiple vehicles went off the road or became stuck during the heavy snowfall.

The Black Forest Fire Department reports a serious crash forced the closure of Hodgen Road east of Highway 83 all the way to Black Forest Rd before 5 p.m.  The road is now open.

This morning there were 20 cars involved in multiple crashes along I-25 between Monument and Castle Rock. The road opened just before 1:00 p.m.

Also in Douglas County, Palmer Divide east of I-25 remains closed along with Spruce Mountain Road.  Chain laws are in effect on I-25 from mile marker 156 and mile marker 174.

Our own reporters suggesting avoiding using Beacon Lite Road as an I-25 detour as many trucks are getting stuck in the snow. You could also use Highway 83 as an alternate route.

The Colorado Department of Transportation reports adverse weather between the Colorado border with Mexico and Colorado City is impacting travel. Slower speeds are advised in the area.

Colorado Springs Police, Douglas County Sheriff’s Office and Colorado State Patrol in Castle Rock are on accident alert due to the increasing number of accidents.

If you are involved in a crash that does not involve serious injury, or the possibility of drugs or alcohol impairment, exchange information with the other driver and report online later. It is not safe to remain on the side of the road in these conditions.

During close to whiteout conditions it is prudent to have your headlights on for increased visibility by other vehicles.