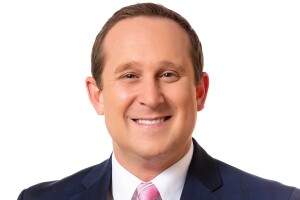 Award-winning meteorologist Alan Rose can be seen weekend evenings on News5, and during the week reporting on weather stories that matter to you.

Alan joined the weather team in the fall of 2019, and although his time in Southern Colorado has been short-lived, he says that he's already experienced a crash course in Colorado's wild and extreme weather. One of his most memorable moments came in November of 2019 while reporting live from Monument. More than a foot of snow fell in single-digit temperatures as Alan brought viewers continuous updates about changing road and weather conditions. Another big day came during severe weather season, when a strong line of thunderstorms, known as a derecho, blasted through Colorado with damaging wind gusts and large hail.

Before coming to News5, Alan spent more than 14 years as chief meteorologist at KEYT and KKFX in Santa Barbara. While in California, he covered many natural disasters, including raging wildfires, deadly mudslides, and powerful Pacific storms. In 2015, Alan was awarded the Golden Mike Award from the Radio & TV News Association of Southern California for Best TV Weather Segment. Prior to Santa Barbara, Alan worked as a meteorologist at WCBI in Columbus, Mississippi.

Alan was born in Jacksonville, Florida, and attended college at the University of Alabama. He received his degree in Communications while competing as a springboard and platform diver. As a student-athlete, Alan represented the university on a national stage, and can still do a handstand all these years later. Following graduation, he went on to earn his graduate degree in Geosciences from Mississippi State University.

Alan says that living in Colorado is a dream come true, and plans to spend as much time as possible in the mountains. He's an avid skier, and loves to hike, camp, and explore our beautiful state. He's also eager to get involved in the community while taking on the challenge of working in one of the most diverse climates in the country.