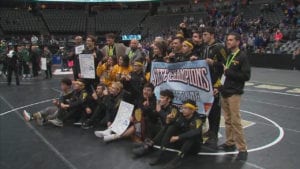 A half of a point separated Pueblo East from gold and silver in 2018 and a team wrestling title. They left no doubt in 2019.

The East Eagles amassed 200.0 team points for their first 4A wrestling team title in school history, topping Pueblo County at 181.5.

Zion Freeman (195 lbs), Dominic Robles (220 lbs) and Andy Garcia (285 lbs) all won their weight classes, backing up their claim as the best heavyweight wrestling room in the state.

While the 3 bigs for the Eagles were the nightcap, the night began with a bang at 113 lbs with Brendon Garcia.

Garcia joins an elite club of 25 wrestlers in state history to win four state titles in a high school career. Garcia beat Xavier Espinoza of Pueblo East 7-3 to win in 4A. His previous three titles were in the 106 lbs class. He bulked up for his senior year.

After the match, he said the last title was the hardest one to win because there was no pressure with the first title.

Garcia was one of three wrestlers on Saturday night to join the club: Greeley Central’s Andrew Alirez at 152 lbs in 4A and Ponderosa’s Cohlton Schultz at 285 lbs in 5A.