COLORADO SPRINGS – As the deer population continues to expand, wildlife officials say some of our neighbors are making things worse. It’s against the law to feed wildlife in Colorado, that includes deer. But that’s not stopping people from breaking the law.

Take a look at this map (see below). These yellow dots represent citations issued for people feeding wildlife. Locations all along the westside of Colorado Springs up to the Monument area and all the way out to Woodland Park and beyond. Wildlife officials say feeding the deer hurts them more than it helps them. 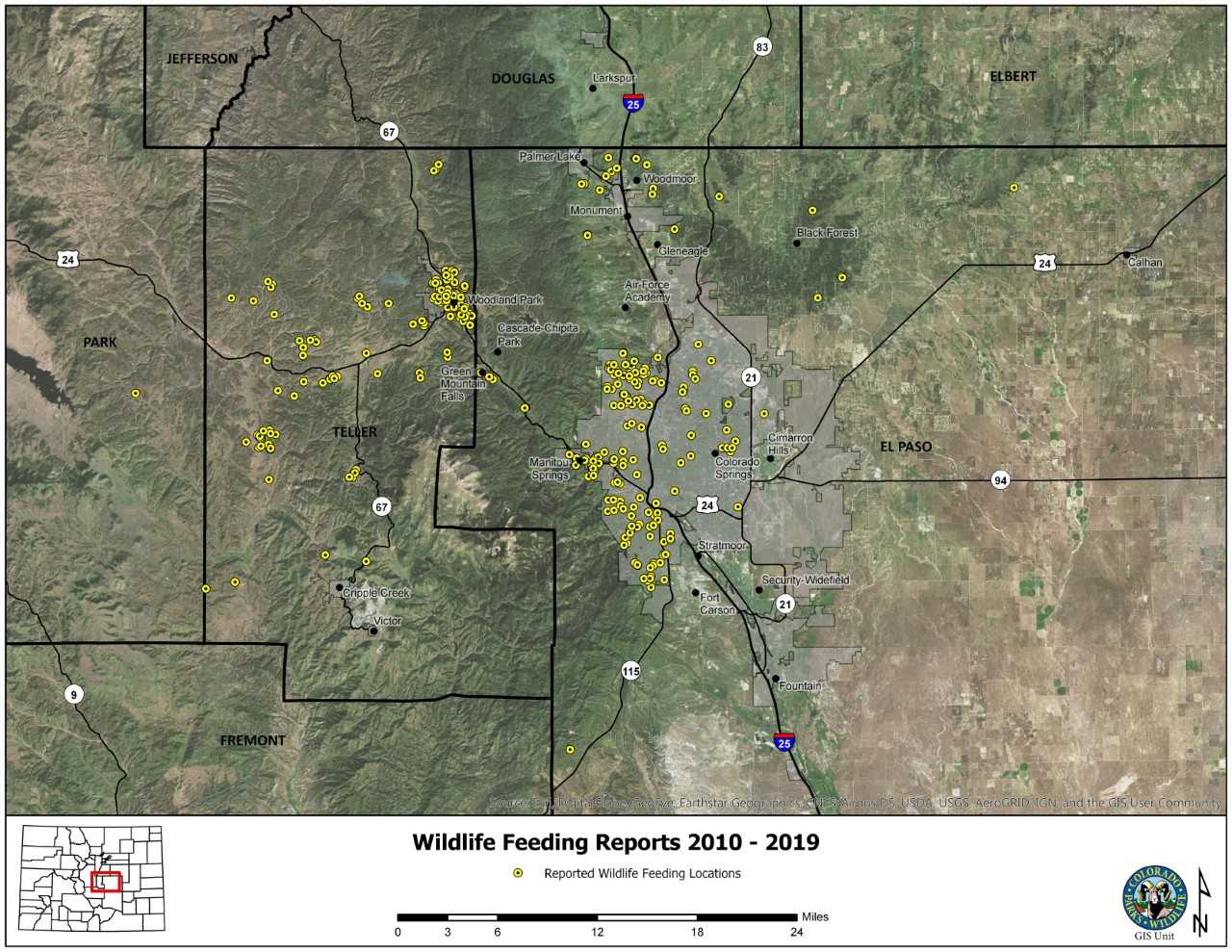 State Wildlife Officer Corey Adler spends most of his days warning and educating homeowners on why it’s illegal to feed wildlife. At a location in west Colorado Springs where the homeowner has been caught feeding wildlife in the past Adler isn’t able to find any evidence of feeding this time, but deer still came around to get a drink from legal water bins.

“Yeah, if there’s an easy way to get water they’ll come for the water too,” said Adler.

We discovered deer were finding an easy meal right in front of a home in a nearby neighborhood.

“This is right in height level for any type of deer. So deer are going to eat this more than anything else,” said Adler pointing at a bird feeder pinned to a tree.

Getting food this easily changes the eating habits of the deer. Sometimes they find food in town that make them sick. Also, making contact in these close quarters trying to get a snack helps the spread of deadly diseases putting the health of these animals in jeopardy.

“If there is open food somewhere that’s easy to get to and high calories they’ll get to it,” said Adler.

Up in the Monument area another call about the illegal feeding of wildlife. When we arrived we noticed the driveway was covered in sunflower seeds. Wildlife officials say they also have pictures of cut up apples placed here as well.

“That needs to be stopped,” Adler told the homeowner.

According to the Colorado Parks and Wildlife website feeding deer is punishable by a $50 fine. The problem is, many people repeatedly pay the fine, but continue the behavior. It’s led to deer showing up expecting to be fed, forcing wildlife officials to put them down.

“We had a woman in Black Forrest a couple of years ago who was attacked by a deer and we had to put that animal down and we found it had a stomach full of corn that someone had been feeding it. That deer had come to rely on people for food and had lost it’s fear of people and particularly those bucks can get pretty aggressive,” said Colorado Parks and Wildlife Area Manager Frank McGee.

Another concern for an unmanaged urban deer population and feeding these animals is the predators that will follow them to your doorstep- creating safety concerns.

“You’re living in Colorado and the aspect of knowing there is deer and bear and mountain lions and bobcats and everything that’s out there can come down into the neighborhood too,” said Adler.

To address the problems with feeding wildlife in the City of Colorado Springs city leaders passed a no feeding ordinance last fall that carries hundreds of dollars in fines for a violation. But get this, we checked with the city and not a single citation has been written by code enforcement as of this post. However, state wildlife officials continue to hand out the $50 fines.