Richard Muszynski hired Wellness Walk-In Tubs to install a custom-made accessible bathtub, but he claims the company left him with an unusable tub and fraudulently billed for services that weren’t done.

Ultimately, it’s up to police to decide whether charges are warranted. 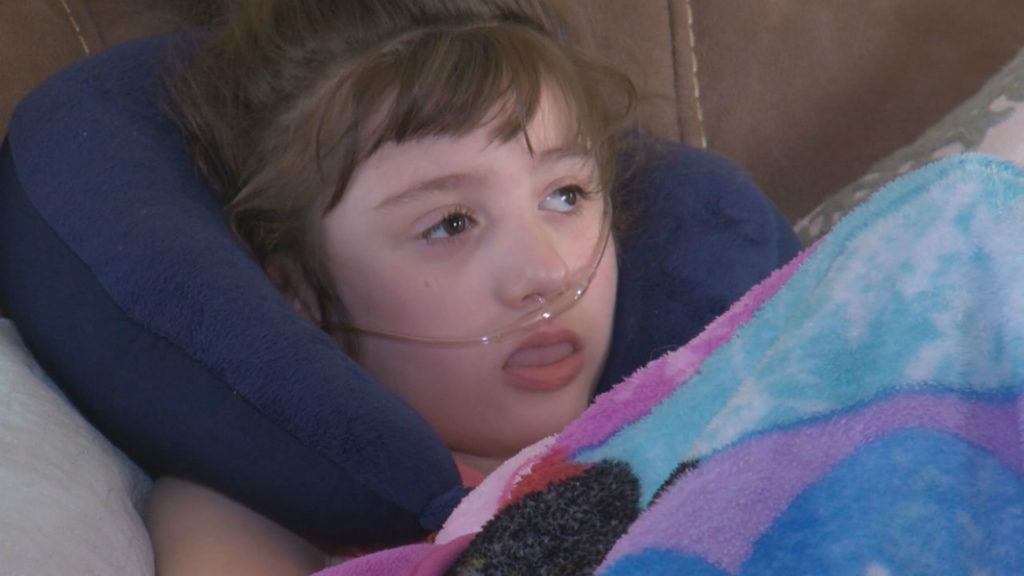 Life is no easy task for Abagayle.

“She has a condition called Aicardi Syndrome which (impacts) only 1,000 in the whole world,” Muszynski said.

Aicardi Syndrome is a rare neurologic disorder that impacts the brain.

Abigayle has frequent seizures and doctors say the average lifespan for girls with Aircardi Syndrome ranges from 8-18 years old.

With the help of a special grant from The Resource Exchange, a Colorado Springs organization helping people with disabilities, Muszynski hired Wellness Walk-In Tubs to build a specialized tub for Abagayle.

The tub was installed, but Abagayle can’t use it.

“There’s no seating for her,” Muszynski said. “She can’t sit in it. There’s no support, no stability. It’s just a piece of furniture.” 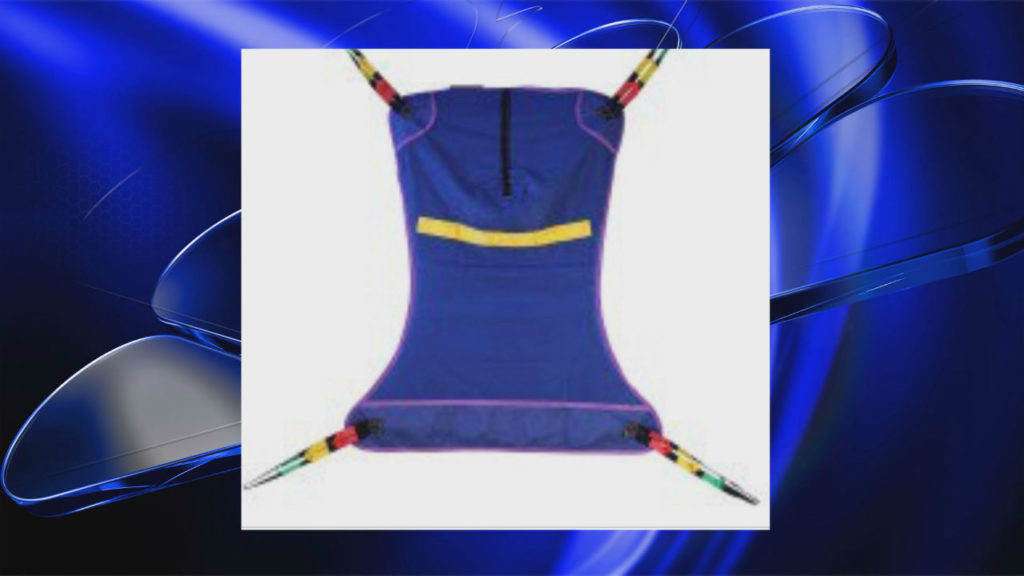 Muszynski says the company was supposed to install a mesh-type harness, similar to a hammock listed above. 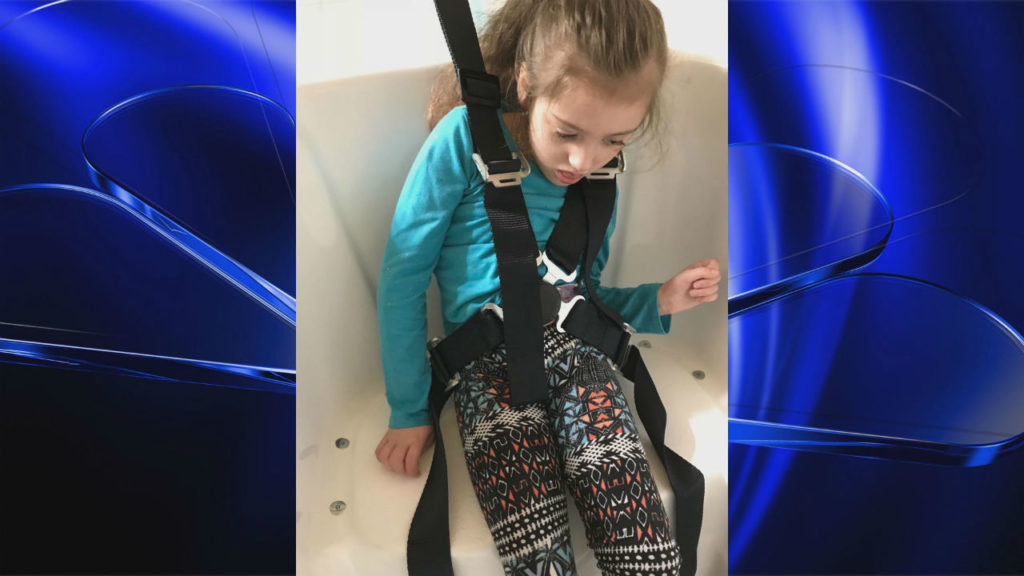 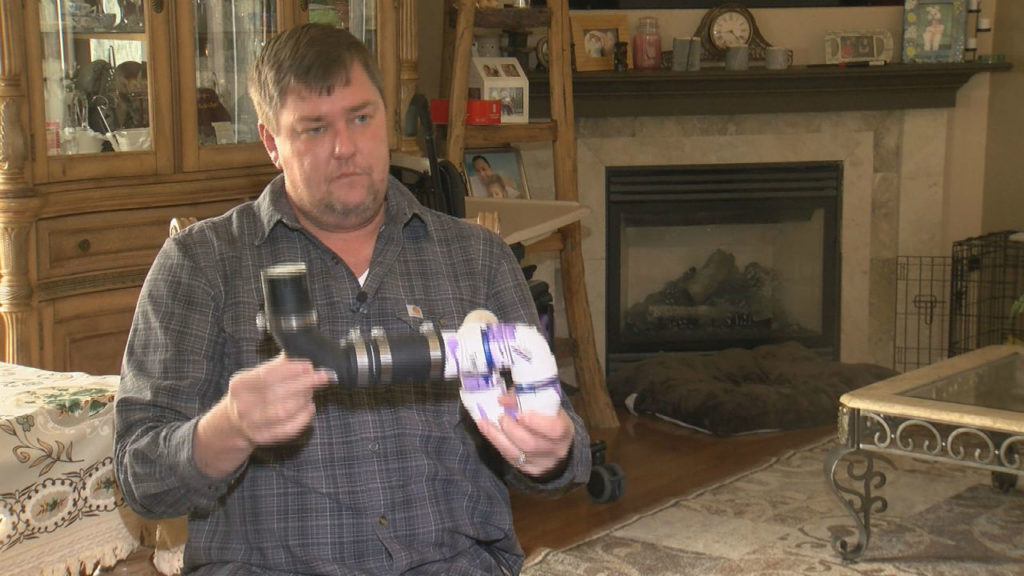 “This was the plumbing that he used for her tub so right on the side of the bath tub there’s an electrical outlet that he had installed,” Muszynski explained. “This pipe right here is a rubber hose which from my understanding from Pikes Peak (Regional Building) you cannot use. This (top of the pipe) wasn’t even glued or secured. The only piece of glue he has on it is right there. If this would’ve popped off with the pressure and the water would have shot up, it would have hit the electrical.”

Muszynski says with the electrical and plumbing work so close together, he feared a leak could have electrocuted and possibly killed his daughter.

He provided News 5 Investigates with an invoice from a licensed plumbing company to strengthen his claim. 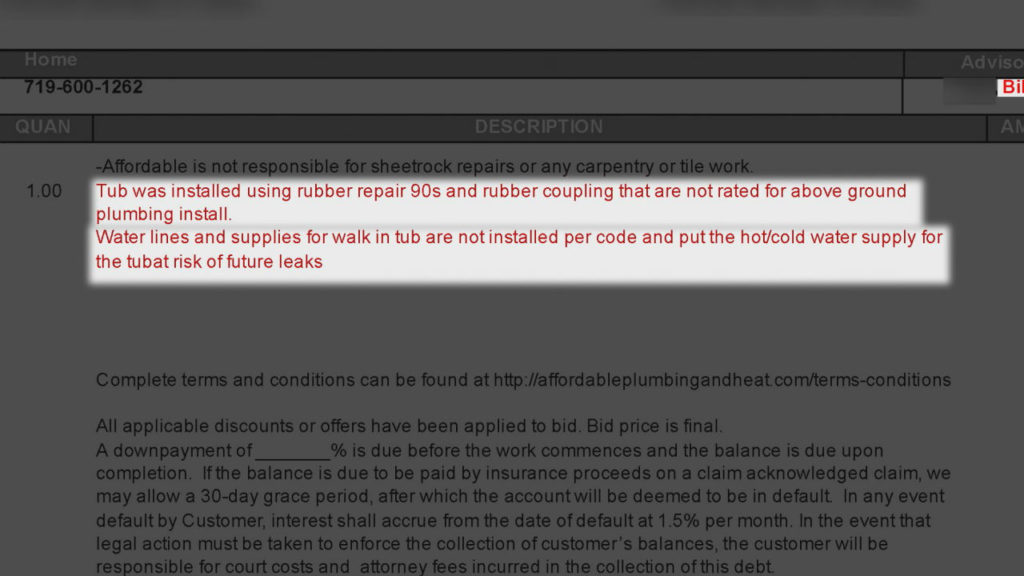 The technician said the bath tub was installed using parts not approved for above ground plumbing. The account notes also said the water lines and supplies for the tub were not installed per code and put the tub at risk for future leaks.

News 5 Investigates also learned proper work permits for the original job were not obtained, something Wellness Walk-In Tubs did charge for in an itemized bill Muszynski provided. 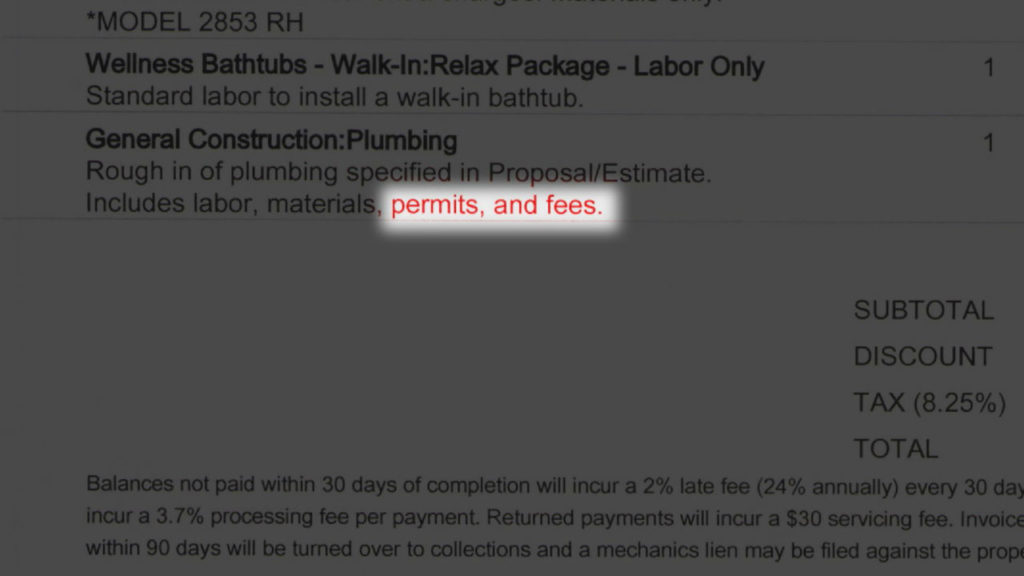 Sean Welch, the owner of Wellness Walk-In Tubs said he couldn’t talk on the record about a particular customer’s issue, citing privacy concerns with HIPAA.

However, Welch did address our questions related to contractors he used to perform electrical and plumbing work.

“We use licensed plumbers and electricians where necessary,” Welch said in an emailed response to News 5. “It is up to those licensed contractors to ascertain the necessity of a permit outside of their liberties within their licensing.”

It’s unclear why proper plumbing permits were not obtained for this particular job. 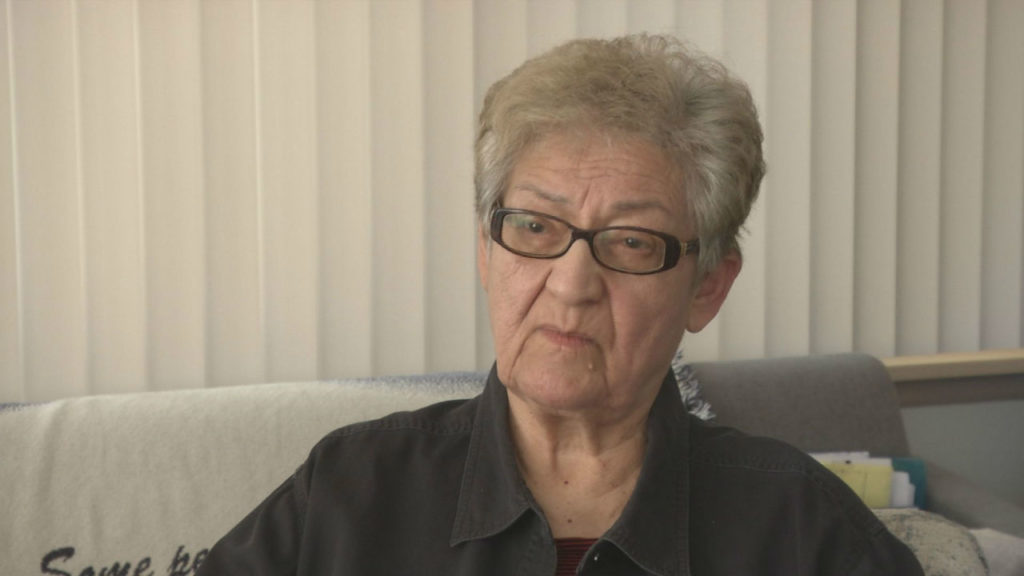 Jessie Montoya is another customer who feels she was taken advantage of and reached out to News 5.

Montoya provided News 5 Investigates with an invoice and contract for her purchase.

She says the day before the company was supposed to install her tub, they called and cancelled the appointment.

“They said they were too busy,” Montoya said. “So I asked them, ‘does this mean you are going to come in 3-4 days?’ They said we will let you know.”

Welch disputes this, claiming Montoya came in weeks after placing her order to change the door design on the tub.

Montoya says she’s certain that’s not true, but without getting into a he said/she said argument, here’s what we do know:

“I asked for the deposit back and he (the owner) was never in the shop,” Montoya said. “He was avoiding my calls. He never answered. I kept calling and they said he is going to call you tomorrow and tomorrow never came.” 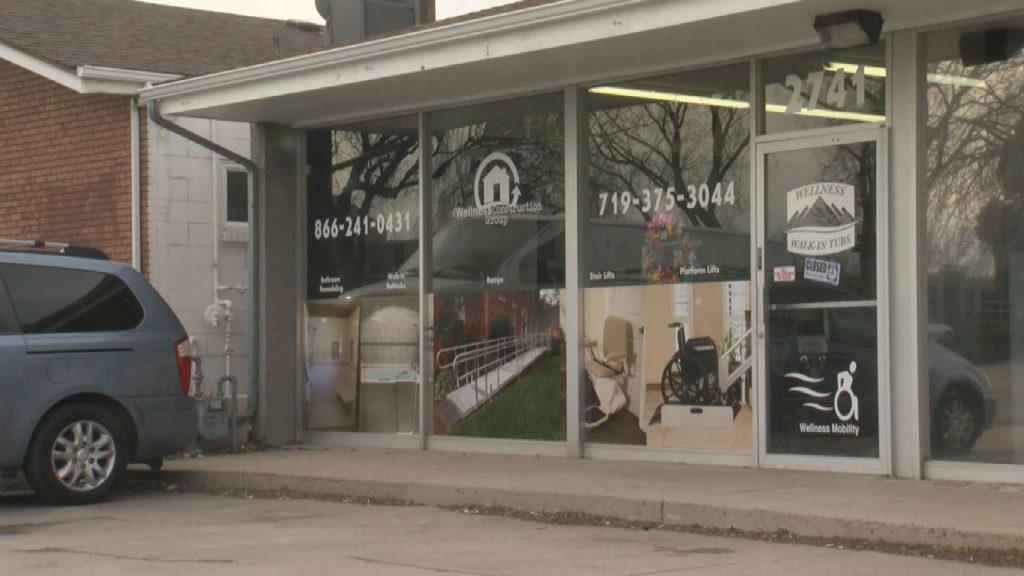 Welch has refunded all but $1,000 of Montoya’s money. He respectfully declined any further refund, citing the company’s cancellation policy.

“We are in possession of a fully signed contract known as our Prime Contract that clearly stated the ramifications of cancelling a project after our standard 3 business day cancellation period,” Welch said in a letter mailed to News 5 Investigates on March 19, 2019. “The client gave us a down payment of $6,500 and we have refunded her $5,500 to date.”

The company explained they kept $1,000 of her deposit “to cover a small fraction of our expenses as stated in her signed contract”.

“Whilst every staff member of Wellness Walk-In Tubs, LLC wishes we did not have to charge its clients any fees for cancelling a project, it is not something that can be avoided, or the business would no longer be around to provide the much needed services to its community,” Welch said. “Thus, Wellness Walk-In Tubs LLC stands by its Cancellation Policy of its Prime Contract and respectfully declines a further refund as request(sic) by Jessie Montoya.”

As far as Muszynksi’s case is concerned:

In addition to filing a police report, Muszynksi also filed a complaint with the Colorado Department of Health Care Policy and Financing. In the complaint, he alleges Wellness Walk-In Tubs charged Medicaid for damages they caused during installation and falsifying invoice records.

The State does not comment on active investigations but a spokesperson tells News 5 Investigates that complaints like this are taken seriously.

We’re told the State’s Medicaid Fraud Control Unit at the Colorado Attorney General’s Office is the lead agency on investigating these types of cases.

On April 6, Welch emailed News 5 alleging CSPD told him there was no active investigation.

News 5 Investigates postponed airing this story until a second confirmation could be obtained.

“There has absolutely been no change from my last email, this is still an active CSPD criminal case,” Lt. Black said via email on April 8.

The agency has since placed the company’s “A+” rating under review while it investigates complaints.

Before the BBB removed the company’s profile, there were a total of 4 complaints filed since 2016, two of which were filed within 8 days of each other in May 2018.

News 5 requested copies of those complaints from the BBB, but we were told hand-written complaints are not public record.

While he says he respects his customer’s privacy rights, he claims Mr. Muszynksi is harassing him over the project and has made false statements using online reviews. He says he is planning to file a lawsuit in the near future.

Q: I’m not happy with the contractor or business I hired to perform renovation work. What should I do?

A: You should always try to work things out directly with the business owner. In most cases, these issues are civil matters, not criminal. However, if you feel there is a criminal component to your case, you should contact local law enforcement and the Consumer Fraud Division at the Colorado Attorney General’s Office. You can also reach the AG by calling 720-508-6000.

Q: Will your news station help me go to police or file a complaint against a local business?

A: No, we cannot assist you with filing complaints. You may need to seek legal advice. We are required to remain neutral on a subject matter and utilize publicly available records to research a particular problem or issue.

Q: In this story, Miss Montoya paid 50-percent up front before any work was done. Is this a red flag?

A: Absolutely not. Most contractors and companies require a down payment before starting construction. However, you should use extreme caution if someone is asking that you pay 100-percent up front.

Q: How do I avoid problems involving contractor services/installation matters?

A: It’s extremely important to read a copy of the contract before you sign it. Also, make sure the contract has the date it was created, an estimated “start date” and “estimated completion date”.

Q: Why did the Better Business Bureau remove the complaints and “A+” rating for Wellness Walk-In Tubs? Now I can’t see any information about the business.

A: The Better Business Bureau temporarily removes this information while it conducts an “audit” and investigation into a pattern of complaints. Remember, a BBB grade and accreditation is independent of any criminal investigation.

Q: How do I know whether the contractor or company I hired for renovation work is licensed and pulled proper permits?

A: Check with your local Regional Building Office. If you live in Colorado Springs, click here.

Q: What if the investigation clears the business of any wrongdoing?

A: We are committed to reporting the most up-to-date information as it becomes available. We will be in frequent contact with the Colorado Springs Police Department for future updates. Investigations take time, so please be patient.

Q: What if one of the people in your story filed a false police report or complaint with the State?

A: Filing a false police report is a serious matter that could result in criminal charges.

Q: Why did you pursue this story?

A: We hear about complaints against contractors and businesses on a daily basis. However, we use caution and always look for a pattern of complaints and documented evidence. Typically before we decide to pursue any story that involves serious allegations against a business, we require the viewer to provide us with any formal complaints filed, police reports or other evidence. We cannot rely solely on heresay for investigative stories. In this case, we verified four complaints exist with the Better Business Bureau and that an active criminal investigation is being conducted by law enforcement.