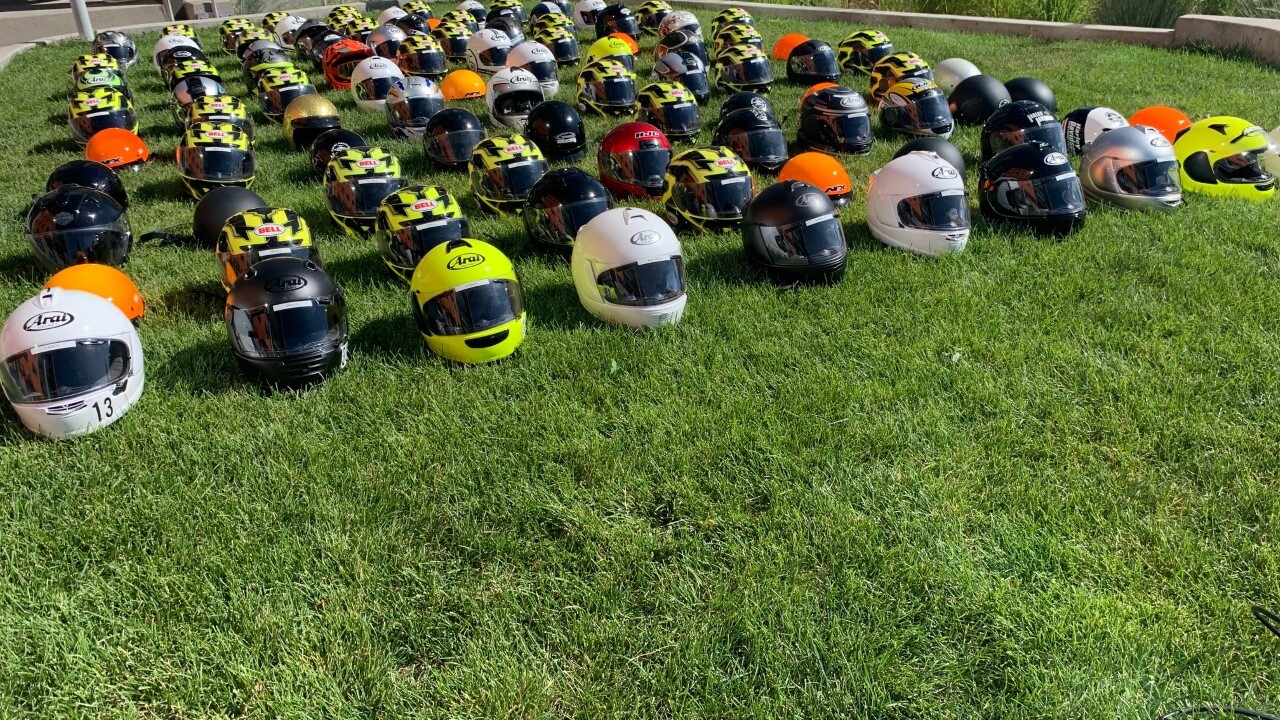 DENVER — Each year after Colorado's snow winters, the warm summer days entice motorcycle riders to the roadways. However, taking to the roads has become more dangerous for motorcyclists in recent years.

In 2018, 103 motorcycle riders lost their lives in Colorado. So far this year, 65 motorcyclists have been killed, compared to 60 at this time last year. That's why the Colorado Department of Transportation and the Governor's Office have proclaimed August 12 Colorado Motorcyclist Memorial Day!

Monday, the Colorado Department of Transportation (CDOT), Colorado State Patrol (CSP), victims and motorcycle riders gathered at CDOT headquarters in Denver to remember the 103 motorcyclists killed in 2018 and to raise awareness about motorcycle safety.

A display of 103 motorcycle helmets provided a visual representation of the lives lost.

“Today we speak for the ones who can’t be with us,” said CDOT Executive Director Shoshana Lew. “If you’re in a car or on a motorcycle, we want everyone traveling on Colorado’s roads to be watchful and safe.”

The event was attended by victims or their families who shared stories about their crashes firsthand. Christi Vigil lost her father in a motorcycle crash, and Christina Hope was seriously injured following a motorcycle crash in 2017.

“Colorado State Patrol witnesses motorcycle crashes that could be prevented on our roads every day,” said Col. Matthew Packard, CSP chief. “With the increasing number of distractions on our roadways, we need each person being safe and looking twice for motorcycles.”

With motorcycle rider fatalities up 8% compared to this same time last year, CDOT urges drivers to be more aware of motorcycles. They suggest drivers:

Since motorcycles are much smaller than cars, it is easy for them to get lost in blind spots. Before making any lane changes, thoroughly check all blind spots and use traffic signals.

When making lane changes, turns, merging and other traffic changes, check twice to save a life.

Use extra caution when turning left.

Motorcycles are smaller which makes it hard for drivers to determine their speed accurately. When making left turns, look carefully for motorcyclists as the eye is not trained to detect them, then take the time to more accurately gauge their speed before entering the intersection.

Motorcycles and their riders can slow down quicker than cars. Giving riders more space than a car ensures that drivers have enough time to slow or stop.

Being mindful and aware of driving situations, changes on the roadways and other unexpected incidents increases the safety for drivers and motorcyclists.