PUEBLO – The annual count is on in El Paso and now Pueblo county of the homeless population.

The tally is critically important to determine how much funding communities receive in order to provide resources for the homeless population. In El Paso County, numbers from 2018 showed a ten percent increase from 2017 and the conventional wisdom is that the numbers of individuals, families, and teenagers who are living on the street, will continue to grow. 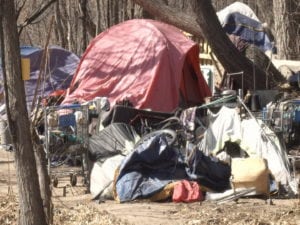 The “Point In Time” survey began earlier this week in Colorado Springs and El Paso County and on Wednesday, volunteers in Pueblo began the process, fanning out across the city and county to conduct the survey.

We spoke with coordinator Ryan Yanke about the focus this year and he says the count translates to dollars, both from the state and the feds to support the homeless commission and support other groups and agencies that he says do incredible work in the community.

The Pueblo numbers should be tabulated sometime next month, and we could see the results of the El Paso County survey by the end of this week.