LAS ANIMAS COUNTY – Excessive speed, along with alcohol and drug impairment, are blamed for a crash on December 12 that killed three people, including a 1-year-old. That’s according to a report from the 3rd Judicial District Attorney’s Office.

The report says 23-year-old Taelor Roybal was at more than twice the legal blood alcohol limit, and was also under the influence of Oxycontin at the time of the crash. The report also says Roybal was driving 96 miles per hour in a 45 mile per hour zone.

The report says a witness who saw Roybal approach the area confirmed the high speed.

Deputies were also traveling at high speeds, while responding to an in-progress domestic violence call, according to the report.

The crash investigation showed Roybal lost control on a curve and crossed into the westbound lanes of Highway 12, and collided with 37-year-old Deputy Matthew Moreno’s vehicle.

There was a second collision with another Las Animas County Sheriff’s vehicle that was following Moreno. Trent Gomez and Kenny Lopez were injured in that crash. Deputy Juan Trancoso was driving a fourth vehicle at the time, but managed to avoid the crash and was not injured.

The report says excessive speed from all of the involved vehicles contributed to the crash, and that simple changes from both Moreno and Roybal could have changed the outcome.

“Taelor and Sgt. Moreno were not wearing seatbelts, which contributed to the severity of this crash. Taelor’s son’s child seat was also not properly secured,” said Capt. Matthew Secor with the Colorado State Patrol. 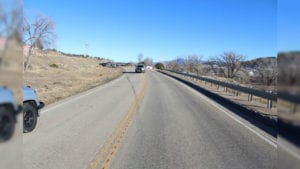