COLORADO SPRINGS – 19-year-old Hunter Treschl seems like your typical college student, when you first meet him.

Except, he has one heck of a story to tell…

“Especially, at parties in college,” he said, smiling. Good story. People really like that one.” 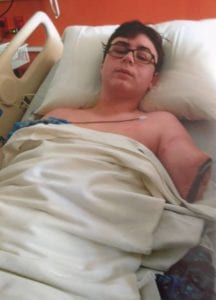 He was visiting family in North Carolina, on summer break, and had spent the day at the beach with his cousin.

“We were doing the normal beach things, like playing in the ocian–lying on the beach,” Treschl recalled.

They went back into the ocean, to rinse off the sand, at the end of the day.

“And I felt what I thought at the time was a sting ray, brushing up against my ankles. It turned out it was a shark and it just came up and grabbed my arm.”

Treschl would later find out it was a bull shark that had attacked him.

It only took one shark bite to take off most of his arm.

“There was about 3 inches of bone left on the end of the arm that had to be taken off in surgery.”

“Somebody on the beach happened to have a belt they were able to lose as a tourniquet and so I kept most of my blood,” He added.

Treschl chose to share his story with the world, including Colorado news stations.

“I felt like I wanted to talk about things, at least at first, and that seemed like a good way to do that,” said Treschl–adding that it felt therapeutic.

That feeling started to wear off after several months, though.

“I would have people recognize me in Walmart or on the street– and I just got really tired of having to tell them the same story 4 or 5 times a day.”

Treschl stepped away from the spotlight to focus on his recovery.

Project REACH allows those who have lost limbs to come together, and share both their success and struggles.

This past fall, he was asked to be a speaker at one of the foundation’s events.

It was a chance to see the impact he’s had on other amputees. 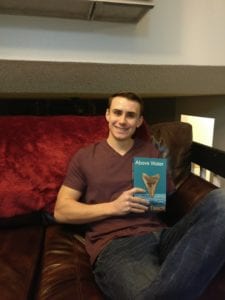 “I talked to another patient who said they had been helped so much by these stories they found online. They knew what they could expect and what life was going to be like–but they also knew that things were going to get better,” Treschl told News5.

“I think being able to spread that mentality has been really rewarding.”

Now, Treschl is looking to reach an even larger audience.

He recently published a book, called “Above Water,” about life since the shark attack.

“It doesn’t just immediately get better,” he said. “There’s still going to be times when you struggle with things. They’re just fewer and farther between.”

As far as what’s next…

“I have no idea. I just going to try to live my life and enjoy what I’m doing. Hopefully, that’s what happens.”