17-year-old Kaden Currier of Monument and 17-year-old Avory Kvale of Colorado Springs died at the scene of a crash, along Highway 105, on Thursday morning.

Family and friends pulled over along Highway 105 to lay flowers and grieve over the loss of the two teenagers-who had been dating for over a year, according to friends.

They were already looking at colleges to attend together, when the unimaginable happened.

Davis says he and his younger cousin were close growing up.

“His dad was our wrestling coach growing up, so we also used to wrestle and hang out before wrestling tournaments.  [We did] A lot of fun stuff growing up.  We was a wild kid–ripping dirt bikes around and stuff like that,” he told News5–the memories briefly bringing a smile to his face.

Davis and his family spent the better part of an hour at the memorial, tearfully embracing one another until dusk settled in.

“My whole family’s kind of messed up and distraught right now. This is the last thing we were expecting this time of year,” he added. 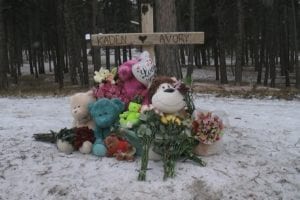 Shortly after leaving, a group of high-school students arrived–explaining to our news crew that they had set up the memorial site earlier in the day.

“We got the stuffed animals and the flowers right here,” said Colton Hittle, gesturing toward the memorial, while a News5 photographer shone car lights onto it.

Hittle was happy to see how much the site had grown in a matter of hours–pointing out a necklace and wooden cross that had been added at some point during the day.

“It just makes it even better. I hope more people come out and add onto it.”

He and his friends–Devun O’Hara, Garrett Behm, and Jacob Hermansen (all juniors at Discovery Canyon High School)–say they were very close with Kaden and Avory.

“Seeing something like this allows everyone to come out here and just take a moment to be with them,” said O’Hara, as he stood next to the memorial Friday night.

The group of friends admitted they were still in shock over what had happened just a day before.

“Just that they’re gone is hard to wrap your head around,” said Behm.

“It’s very hard. And to be standing here next to this–I wish I was standing next to them instead. I just miss them,” O’Hara added. 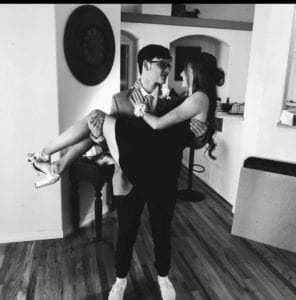 They started the memorial to make sure the two 17-year-olds–who were taken too soon–are not soon forgotten.

“They loved each other, and they loved being around other people. They just loved the presence of friends and family,” Hermanson reminisced.

“I think everyone wished they could have a relationship like that. They were always so happy,” Hittle said.

But Kaden always made time for another very important girl in his life.

“He waited for me after every single class and we walked down the stairs together, with his girlfriend. It was good, with him always being there for me,” said Currier’s younger sister, 14-year-old Chloe Currier.

Currier says her brother was very caring and loving, while he played the role of protective big brother in her life.

“He was the best person you could be related to. There’s just nothing you couldn’t tell him,” Currier said, trying to hold back tears.

“He’s easy to talk to and there for everything you needed him to be. [He] Always made you laugh, even when you didn’t want to.”

While the memorial was created to show support for the families of Kaden and Avory, Hittle hopes it will also make a difference to those who never knew the couple.

“We were kind of hoping people would see this as something to drive safe–no matter what the conditions, no matter how long you’ve been driving. We just kind of want everybody to stay safe, because we don’t want to have another one of these,” he concluded.

Discovery Canyon Campus High School will be open on Saturday, December 29th, to offer counseling to family, students, and staff. Below is a letter sent out by DCCHS Principal Mark Wahlstrom:

“It is with deep sadness I report that two of our students at Discovery Canyon Campus High School, Avory Kvale and Kaden Currier, died in a tragic automobile accident yesterday morning.

We know this news will be upsetting to students, parents, and staff. Our counseling team and district crisis team will be available this Saturday, December 29, 2018 from 1:00pm to 3:00pm at Discovery Canyon Campus High School to support students, family, and staff in need. We care very much about each and every student, so please don’t hesitate to send an email update to your student’s school counselor providing any information that you think the school should be aware of regarding any difficulties your child is having regarding this situation.

We know that teens value opportunities to support one another during these times, but it is also critical to have the mentorship, support, and supervision of caring adults to see them through these next weeks and months. We’ve included some strategies on supporting grieving students. (Please see link below.) It is during moments like these that we must come together, lift each other up and create networks of support. Please keep the families affected by this unimaginable tragedy in your hearts and do not hesitate to reach out if your child is in need. Thank you for your support of our school and community.”

A gofundme page has also been set up to benefit the Currier family. Click here for more information.