EL PASO COUNTY- Thanks to members of our local military, hundreds of people, families, including our veterans, will enjoy a Thanksgiving meal this year.

First, the cooks on Fort Carson have fired up the kitchen to prepare hundreds of pounds of food for a traditional Thanksgiving meal that will be served at the Salvation Army in Colorado Springs next week. 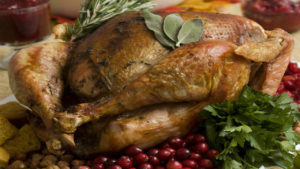 They are preparing enough turkey, stuffing, mashed potatoes, gravy, and dessert for three thousand people. This is the 29th year that our Mountain Post and it’s soldiers have stepped up to help others in our community during the Thanksgiving holiday period. And keep in mind, they are not only preparing the food, but they are also donating their time to help serve it.

Staff Sergeant Mark Scozzavava told News5 that the Pikes Peak region community gives Fort Carson soldiers and retirees so much when it comes to discounts and deals all over town, all year long, that preparing and serving the Thanksgiving meal is just one way they can give back to the community.

Soldiers will be cooking for three days, around the clock, to get the food ready in time to deliver. Three different groups will be working in eight hour shifts, to get it done.

We would be remiss in not mentioning that the Mount Carmel Veterans Services Center in Colorado Springs is giving away turkeys for the Thanksgiving holiday. The program is called “Operation Turkeys For Troops”, partnering with local businesses and other sponsors. Holiday baskets, including the turkeys, will be handed out to an estimated 1,200 military families in the Pikes Peak region.

Again, those who are organizing this event say that this community cares so much for our active duty military and our veterans, and provide so much to them all year long, this is just another gesture to help our military families. Those who will receive the free turkey baskets have been identified by what’s called the Unit Ministry on Fort Carson.