COLORADO SPRINGS – Given all the hail we’ve seen this summer, it might not surprise you that local auto dealers are doing very well right now.

A lot of vehicles are either totaled from storm damage or people decide to replace instead of repair.

Motor City’s Phil Long Ford dealership’s manager Mark Barton says he’s seen a 30 percent increase in car sales and he the majority of those buying would’ve never thought to do so before this week.

But in the end, it can be a great option for those experiencing severe hail damage.

Stedmon Phillips, for one, didn’t think he’d be at a car dealership on Saturday.
But then again, he didn’t expect Tuesday’s hailstorm either.

He was on post at Fort Carson when it hit.

“Bang bang bang,” he said when describing what he heard. “So I’m like, ‘oh, that’s artillery. No. That’s hail. Oh, that’s someone’s windshield.'”

Then, the news his car wasn’t spared.

“My wife just calls me, freaking out, she’s like ‘everything’s gone,” Phillips said. “And we’re both just kind of like ‘alright well let’s go get a new car then.'”

And he’s not the only one. More car shoppers have been turning out and sales have seen an uptick at the Ford dealership. 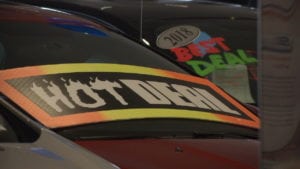 “They’re realizing that to get the cars fixed is about three to six months,” Barton said.”So you kind of have to weigh it out. What you owe on the car, what you’re looking to achieve, do you have the patience to wait, some of these cars are so badly beaten up […] they just left them here and they left in a new car.”

Barton says most cars people trade come in at more than 10 thousand dollars in damages. But the good news, some dealerships like this one can handle the paperwork and payoffs associated with the trade-in – making it that much quicker to get a new set of keys.

“They’re very surprised,” Barton said. “They come in here and within three hours later, they’re driving away in their new car.”

“It’s just the best easiest process I have,” said Phillips.

And in many cases, he says monthly payments won’t change much.

“The silver lining is they’re moving up a year, they won’t have a payment for 90 days, it’s only about 10-15 dollars more, in some cases they’re lower,” Barton added. “And then that really gives them a peace of mind.”

For Phillips, it’s a much-welcomed upgrade.

“That one looked like a soccer mom’s car,” he said when remembering his old car. “But this car looks like a hip soccer mom’s car so there we go,” he said as he pointed at the Ford Explorer model he picked out.

And as fun as a new ride can be, it’s still imporant to have a “Plan B.”

“We’re going to keep on having hail so just be prepared,” warned Barton.

“You’re in Colorado so you need to save year-round, just get ready,” added Phillips.

When it comes to shopping for insurance, Barton suggest focusing on which company can offer the most coverage, rather than the best price.