COLORADO SPRINGS – A bill moving through the state legislature would authorize a November ballot question asking voters to allow an expansion of sports betting in Colorado.

In this 360° Perspective we’re looking at the state of sports betting and how this bill would change it. 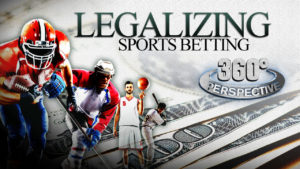 Here’s what is legal right now under Colorado law:

Under federal law- your office March Madness bracket is illegal if money is involved, but the vast majority go overlooked by authorities.

Instead of just legalizing sports betting, lawmakers have to ask you to vote on the issue because it means new taxes. According to Colorado’s “Taxpayer Bill of Rights,” new taxes have to be approved by voters.

The ballot question would ask you to approve the following:

The legislation already passed the house and it has to pass the senate which is hearing it Wednesday, May 1. If passed and signed into law and then voters approve- the new law could take effect as soon as Feb. 2020.