We are following up on our 360° Perspective on the National Popular Vote Interstate Compact which Colorado’s democrat-controlled legislature passed and Governor Jared Polis signed into law in March.
Oregon is now poised to be the latest state to join the compact. 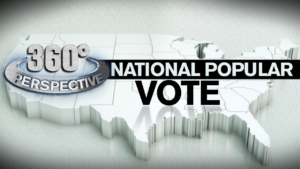 The interstate agreement is working to award electoral college votes to the winner of the nationwide popular vote in presidential races.

It would go into effect once the number of states involved reach a total of 270 electoral votes, the amount needed to win the White House.

Oregon’s legislature expected to pass a bill in the coming weeks to join the compact which would bring the number of electoral votes to 196, just 74 votes short of the 270 needed to trigger the win.

There is an effort in Colorado to take the decision out of lawmaker’s hands and bring it directly to the voters. Monument Mayor Don Wilson and a Mesa County Commissioner are leading the petition effort to place a question on the next statewide ballot.

Mayor Wilson says they have 1,700 volunteer petition circulators.
He says there are enough petitions in the field right now that when filled out would equal about 150,000 signatures. They are pursuing a total of 200,000.
This week there are 20 drives going on throughout the state.

Colorado has joined the compact but it would not affect your voice in elections until the compact gets the votes needed to trigger the win. Legislative chambers in several states have approved it in the past and the efforts could always be renewed.

We’ll continue to track the progress of the compact and the repeal effort for you.

If you have an idea for a story you think needs a 360° Perspective email 360@koaa.com.