PUEBLO – Pueblo City School are facing a major transition period in the years to come. Aging buildings, declining enrollment and budget issues are presenting leaders and voters with important decisions.

We’re taking a closer look at some of the numbers for you and how they could impact the city’s high schools in our 360° Perspective. 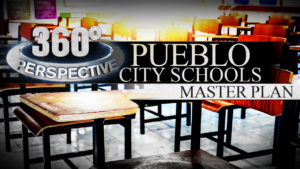 Pueblo’s four high schools have been staples in the community for decades. Each one is a monument to the neighborhoods- graduating generations of family, having some of the state’s oldest high school football rivalries and enough memories to create museums.

The city’s oldest high school building is Central. It was built in 1905 but renovated in 1973. D60 tells us even though it is old, it is one of the most structurally sound high schools in town.

We’ve been tracking trouble in the district for months for you. 80 percent of all schools in the district are more than 50 years old. In 2018 an independent firm determined 14 out of 30 of the buildings are in “critical” or “very poor condition.”

The same firm estimates that more than $800 million is needed for improvements and repairs across the district. East High School alone is one of the costliest to repair.

This means a drop in 100 students this year alone would cost the district $837,000 in funding. Over the past decade, the declines total in the millions.

The district is holding several community meetings to get feedback and provide information. The different options include consolidating schools, potentially closing others and even building new facilities. The plans vary, but most include the closure of East High School due to the high cost of repairing the building.

If needed, there will be a special board meeting April 9th to discuss action regarding school closures.

The Board of Education will meet twice in late April on the recommendations and whether or not to move forward asking voters to approve a bond.

The final decision is expected in May.

News5 will track this every step of the way for you and will let you know what happens as it happens.

Click here for more information on the community forums and master plan. There’s also an email address to send your feedback.

This report was produced by Monica Gouty and Carl Winder.