COLORADO SPRINGS – The National Popular Vote bill is on Governor Jared Polis’ desk as we speak, and he’s said he will sign it.

It will change the way Colorado’s Electoral Votes are cast in presidential elections.

The bill passed through the House on a final vote Thursday, after already passing in the Senate.

This issue has gotten the attention of a lot of you, the voters, the people it will directly impact. That’s why we’re following up for you with what’s next in our 360° Perspective. 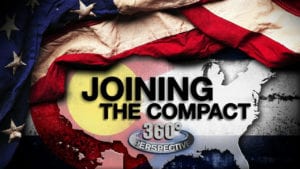 Here’s a breakdown of the numbers and what they mean:

Each state’s number of electors is the number of members in Congress, plus two Senators. Colorado has nine. Highly populated states like California have 55 and New York has 29. Both of those states are also part of the compact.

It takes 270 Electoral Votes to win the White House.

The organizers of the movement nationalpopularvote.com say there are 11 states plus Washington D.C. in the compact. With Colorado it will have 181 of the 270 votes needed to trigger the win.

Important reminders about the compact:

Colorado won’t join until 2022. It will have no impact on the upcoming 2020 Presidential Election.
Other states are also considering it right now.

There is already a challenge to the compact in Colorado.
A Mesa County Commissioner announced on Twitter that she and Monument Mayor Don Wilson are petitioning the Secretary of State to seek voter approval in the form of a ballot question in 2020.

There are state lawmakers, including some democrats, who voted against the bill believing voters should get to decide how Colorado chooses the President. Amendments to bring it to voters were introduced in the statehouse but they were struck down by lawmakers.

This is an important issue that impacts all of us. We will continue to track the ongoing debate.

If you have a story that needs the 360° Perspective please email 360@koaa.com.