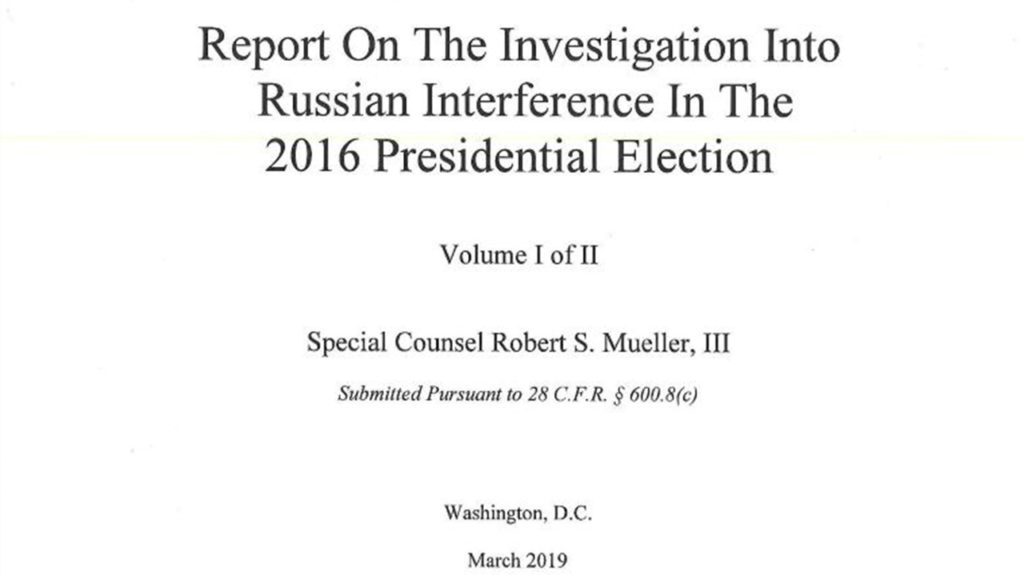 WASHINGTON – The Department of Justice has released the redacted version of the Mueller report.

Special counsel Robert Mueller’s report includes President Donald Trump’s written responses submitted in the Russia probe and said Trump reacted to his appointment by saying it was the “end of his presidency.”

Trump told Mueller he had no recollection of several key events in Mueller’s probe, including a 2016 meeting at Trump Tower between top aides and a Russian lawyer offering aid to his campaign.

Trump also told Mueller he had no recollection that he was told that Russian President Vladimir Putin wanted to aid his campaign or hurt Hillary Clinton’s 2016 effort, or that any foreign leader wanted to help his candidacy.

It showed Mueller’s team was dissatisfied with the written responses but decided against issuing a subpoena for an interview.

In the  report, prosecutors call his answers “inadequate.” They considered issuing a subpoena for Trump but decided against it after weighing the likelihood of a long legal battle. Prosecutors also said they had enough information from other sources to draw “relevant factual conclusions on intent and credibility.”

Mueller’s team investigated contacts between Trump’s campaign and Russia and whether the president obstructed justice. However, the written answers did not cover obstruction of justice.

The 10 episodes scrutinized by Mueller include Trump’s firing of FBI Director James Comey, the president’s directive to subordinates to have Mueller fired and efforts to encourage witnesses not to cooperate.

The president’s lawyers have said Trump’s conduct fell within his constitutional powers, but Mueller’s team deemed the episodes were deserving of scrutiny to determine whether crimes were committed.

The report on the Russia investigation is two volumes and 448 pages long including attachments.