FALCON – It was the first tornado to touch down in El Paso County during the month of March since data has been kept since 1951.

That’s according to the National Weather Service, which classified Friday’s tornado in Falcon as an EF-0, meaning the winds did not exceed 85 mph.

Despite the low classification, neighbors and employees at the Falcon Storage Center, which received the bulk of the damage, said they thought it was much worse. An updated damage assessment by center staff revealed 100 vehicles were impacted, while the cost of that damage is estimated to cost at least $500,000. 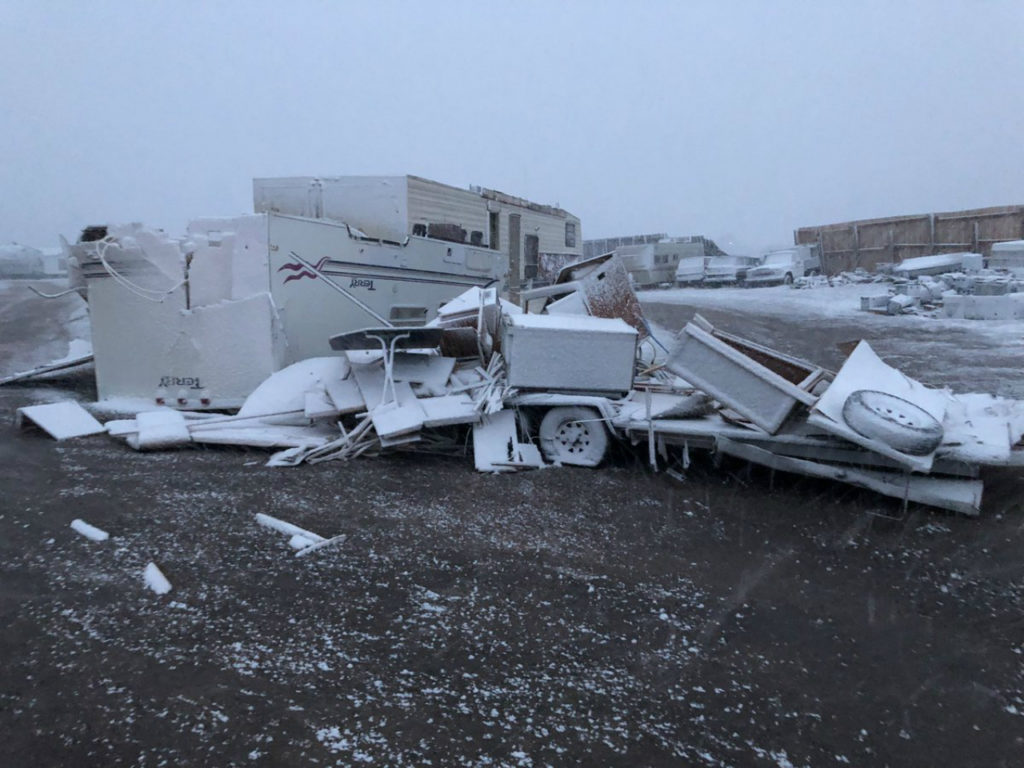 Dennis Hawn lives in an apartment right across the street from the storage center. His home shook, but he knew the bulk of the damage was next door.

“It lasted maybe three or four minutes, and it was over. But at that time, we had no idea they had the damage out here,” Hawn said. “To be able to pick up a 6,000-pound plus trailer and toss it around like it was a toy, it was quite a scene.”

He’s referencing an RV that is now reduced to a pile of rubble.

Manager Julie Bagley told News 5 the trailer belongs to the storage yard owner, who was puzzled when he didn’t see his trailer outside the window Friday.

“He looked out and realized his trailer that was parked out front here was missing, and he couldn’t see where it was at,” Bagley said.

That’s because the 85 mph winds accompanying Friday’s tornado picked up the trailer, rolled in and then threw it into a row of other RVs.

It was all caught on the company’s surveillance cameras.

Now, the yard littered with debris on Friday is getting back to normal. There’s still work to be done to fix the fence around the property and all of the property inside, but Bagley said she’s thankful the tornado wasn’t any worse.

“Even though there is some pretty expensive toys that people have out here, it really doesn’t matter as long as nobody’s hurt,” Bagley said.

When asked what financial impact the tornado will have on the center, Bagley said she was first worried about that too. She said customers have been understanding and worked with their own insurance agents, while the center has actually welcome a handful of new business accounts.