Now chief of the department, Collas said getting the tactical equipment is on par with fire departments first investing in breathing apparatus. It’s just a part of evolving with the times.

All 24 firefighters working at Colorado Springs Fire Station 1 now have their own ballistic gear, thanks to donations from several community partners, including Shield 616.

It’s a sad reality for firefighters across the nation, including Colorado Springs. Collas recalled the shooting on Halloween in 2015, when the same firefighters receiving the new gear were needed to render aid to victims while the shooter was still at-large.

“The suspect was in the middle of the street with his rifle in hand, and in an active shootout with the police department,” Collas said. “And our firefighters were right there, protecting the citizens, getting them inside of buildings.”

That’s why Kevlar vests, ballistic helmets and trauma kits are now part of a standard firefighters’ equipment at Station 1.

Driver-Engineer Luis Pacheco didn’t think he need the gear when he joined the department six years ago.

“We go into some dangerous situations sometimes, and we don’t really think about it, because it’s our job,” Pacheco said.

Thanks to community donations, Pacheco and every other firefighter at Station 1 now has their own gear.

It costs $2,000 to get just one set of the tactical gear, which includes the vest, ballistic plates for the vest, helmet and trauma kit. Shield 616 is still working to outfit all of the 21 remaining Colorado Springs fire stations — a project that will cost just under $900,000 when complete. 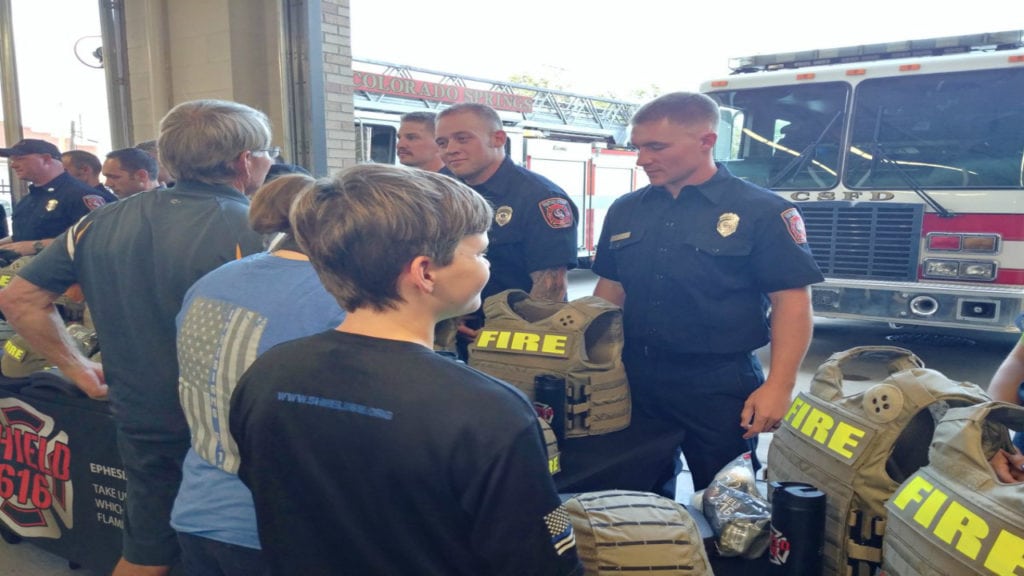 The firefighters met their donors at a special presentation Wednesday night.

“It’s just very special, and it just means a lot to know that people care and actually think and want to donate to this sort of cause,” Pacheco said.

Wednesday’s donation was the first to firefighters by Shield 616, the local nonprofit that has worked to equip local law enforcement with the tactical gear.

Founder and former Colorado Springs Police Officer Jake Skifstad said getting the equipment for all first responders was always a part of his vision for Shield 616.

Collas said it’s a way of showing the men and women working tirelessly to protect the community that we care for them too.

That vision is shared by the Fire Foundation of Colorado Springs, the nonprofit partner of the fire department, as well as The Protect Effect — a project led by advertising agency Vladimir Jones to outfit all local emergency personnel with this gear.

“It’s important that we protect those who protect us, and so for the community to support firefighters, police officers and sheriff’s deputies in real and meaningful ways, we wanted to make sure we were getting the word out appropriately,” she said.

If you’d like to donate and help more firefighters get the protective gear, visit TheProtectEffect.com for more information.