A 33-year-old Pueblo man was booked into the Pueblo County Jail after admitting he attempted to kill a man.

David Turner told officers he had just stabbed a man who was following him early Tuesday morning. Pueblo Police officers were dispatched to the Health Solutions on 1304 Chinook Lane on reports of a man pounding on the door.

The man, later identified as Turner, told employees he had just killed someone. He also told officers the man following him attempted to attack him. 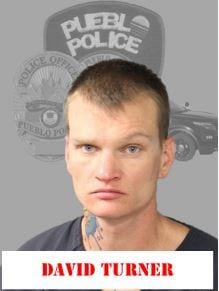 The stabbing victim, 33-year-old Richard Trujillo, was found at the corner of Chinook Lane and Hunter Drive with multiple stab wounds. Police said the stab wounds were to his upper body, including his head and back.

He was transported to a local hospital with serious bodily injuries, but is expected to survive, according to police.

Turner was interviewed by officers are the Pueblo Municipal Justice Center and later booked into the Pueblo County Detention Center on a 1st Degree Assault charge.