The type 2 Rocky Mountain incident management team is assuming command of the northern end of the fire Monday morning.

That will add about 60 firefighters, all working to get the flames under control. The Spring Fire has grown to 53,588 acres as of 6 p.m. Sunday night, with five percent containment, officials said.

Firefighters said they are now focused on advanced structure protection in the Cuchara. Crews are working to create defensible space around homes that are threatened.

A community meeting with officials was held in the La Veta High School Gymnasium at 6 p.m. Sunday. Officials updated that 60 firefighters will be added to the fight Monday as the Blue Team will come to manage the north end of the fire.

In an earlier meeting, officials said a disaster assistance center for those needing recovery assistance will be opened Monday at the Centennial School in San Luis, Colorado. Officials also reported that Jesper Joergensen, the man who allegedly started the fire, did not start the fire intentionally.

According to a deputy at the meeting, Joergensen was arrested on the same day of the fire. Local authorities, the Colorado Bureau of Investigation and agents from Immigration and Customs Enforcement all took part in the investigation. People attending the meeting applauded that news.

Deportation officers with the U.S. Immigration and Customs Enforcement (ICE) put a immigration detainer with the Costilla County Jail on Joergensen following his arrest. Joergensen is an illegal immigrant from Denmark, according to a statement from ICE.

According to ICE, aliens who are criminally convicted and sentenced are pursued by ICE officers to be removed from the United States after they have completed their prison sentences.

Officials said there is no time table on when people will be able to return home, as conditions can be unpredictable at times.

A pre-evacuation notice was issued for Huerfano County residents around 9:45 p.m. Saturday night. This includes Red Wing, Chama, Malachite and the town of Gardner, also including the Badito area on the south side of Highway 69.

Mandatory evacuations were also issued for Trinchera, this is for the area north and east of Trinchera Ranch Road, and south of Highway 160 in the Ft. Garland area. Evacuees are told to go to the Blanca/Ft. Garland Community Center, as power was shut off in that area.

Sunday, crews are continuing to perform point in the northeast and in the Tres Valles area, protecting structures wherever safely possible. Yesterday and last night, crews engages in active fire fights in Tres Valles, successfully protecting many homes, according to authorities.

Crews are looking for further suppression and burnout opportunities on the east side to keep the fire west of La Veta, and aerial retardant will be used on the east side of the fire. The southeast side of the Spring Fire has the roughest terrain, with significant amounts of dead, standing beetle kill. Crews here are looking for opportunities to create fuel breaks and perform potential firing operations.

The south side of the fire had significant fire activity yesterday; the fire has established itself in the Indian Creek drainage and has moved south of the 421 road. Firefighters are constructing dozer line around the subdivisions on the south side and will begin mitigating around structures. Large columns of smoke will continue to be visible in both the south and the north today.

At 2:30 p.m. Saturday, more mandatory evacuation notices were given for Navajo Ranch, Majors Ranch, and homes along County Road 530 and south to Highway 160. This includes Vega Road near Navajo. Evacuations can be north to Highway 69 or Highway 160 only going east. People are still able to travel west on Highway 69.

Highway 160 remains closed with no estimated time of reopening. Highway 12 is also closed in the Cuchara Valley due to mandatory evacuations.

A concentrated air attack is underway today with air tankers and helicopters being used to cool the fire’s edge and slow growth, mostly on the east side, which is a few miles from La Veta.

The Mayor of La Veta told everyone that the town continues to be on pre-evacuation status, meaning everyone needs to be ready to leave on a moment’s notice. Fire weather conditions are expected to grow more critical in the coming days.

Authorities are working on getting the Global Super Tank to assist in the fire fight, it was last reported in San Francisco, but there are hopes to bring it here to Colorado. 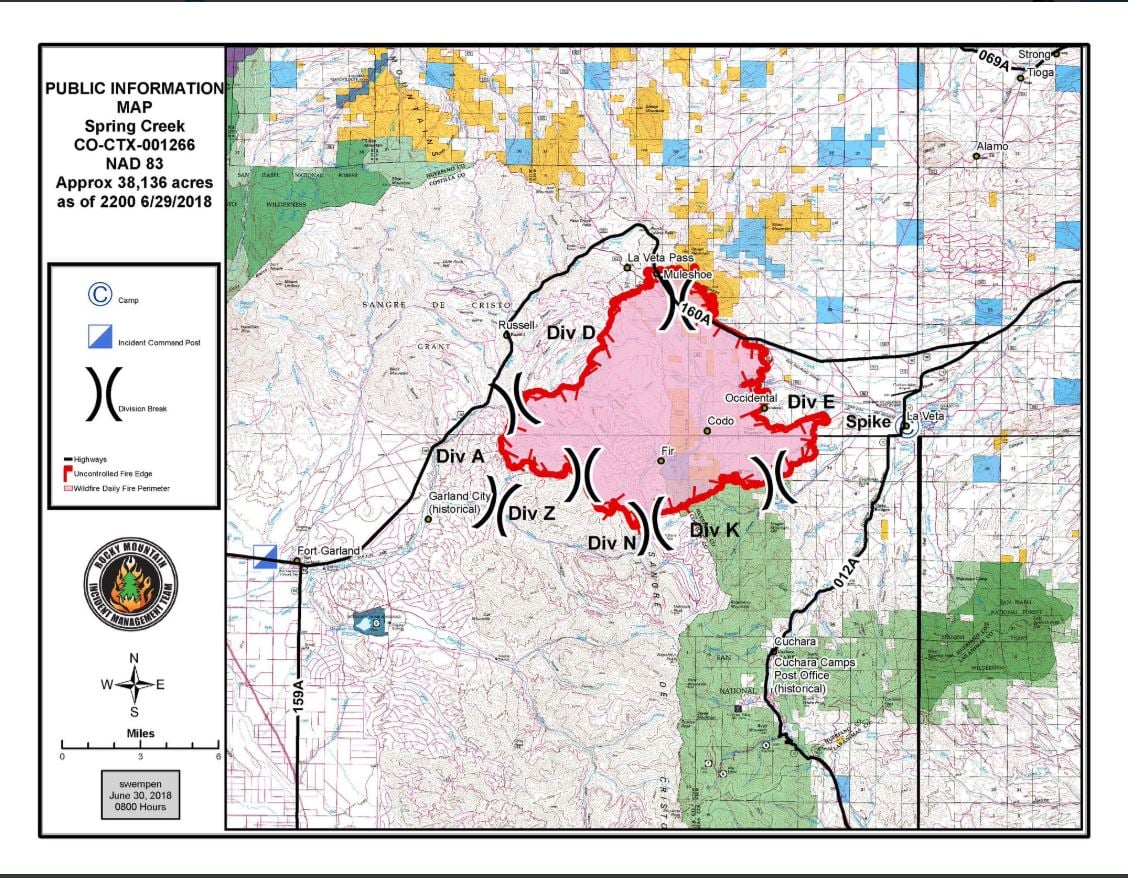 There are currently two evacuation centers open on either side of La Veta Pass.