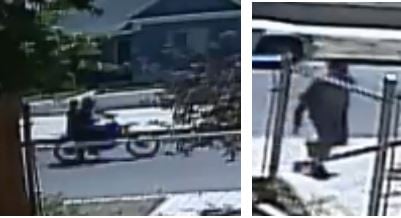 Police officers were dispatched to the 1000 block of Elm Street just before noon Monday on reports of a drive-by shooting. When officers arrived on scene, the residents of the home told police a flare gun was used during the shooting and caused fire damage to the bedroom.

The home was occupied during the shooting, according to police. The surveillance video at the home showed two individuals on a blue and white dirt bike type motorcycle.

Police said the video revealed the suspects pull up in front of the house, while the back passenger gets off the motorcycle, runs and jumps onto the chain link fence. The suspect then fired one round into the house before going back to the motorcycle and fleeing the scene, according to Pueblo Police.

Anyone with information on the incident or the identity of the suspects is asked to call Pueblo Police or Pueblo Crime Stoppers at (719) 542-7867.