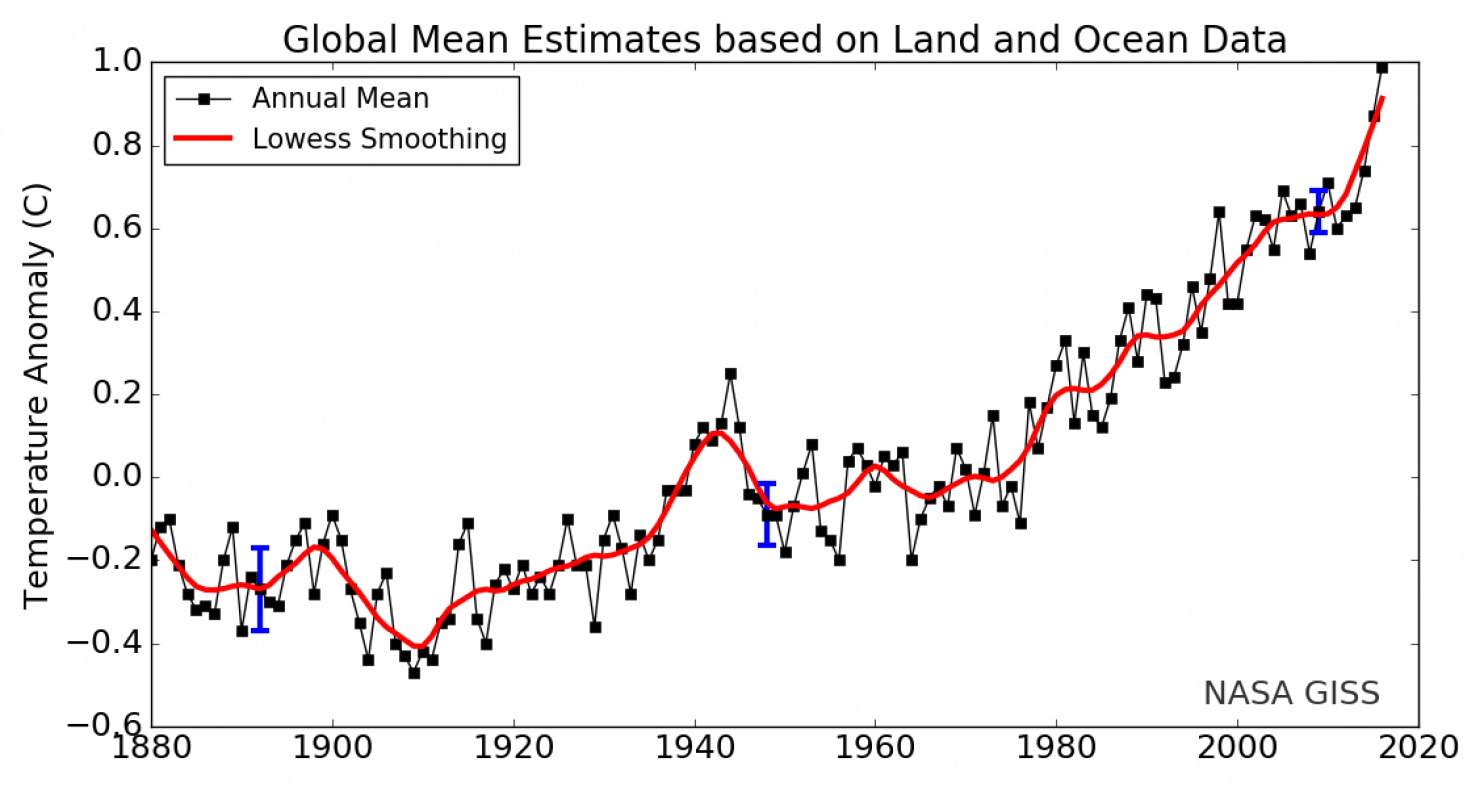 400 months is a long time. 400 months ago, the movie Back to the Future 1 had not yet come out. Neither had Top Gun. Journey’s “I can’t fight this feeling” had just been released, as had Phil Collin’s, “One more night”. A lot of history has happened in 400 months. (That’s over 33 years, by the way.)

So, what makes that number remarkable, is that, for the past 400 consecutive months, the average global temperature has been warmer than “normal”! That is to say, it has been over 400 months, since a month came in “normal” or “below normal”, according to the National Oceanic and Atmospheric Administration (NOAA).

This past April turned out 1.5 degrees above average, even though the USA itself, actually experienced its 13th coolest April on record. But, America’s cooler temperatures could not overcome Europe (warmest April ever) and Australia (2nd warmest ever), as well as above average temperatures in the Arctic.

Let’s deal with one elephant in the room. Reliable records date back to about 1880, but obviously, they were few and far between in the beginning, leaving huge gaps in coverage that required decades to fill in, with reliable instruments. Elephant number two in the room, sensors predating the 1950s were less reliable, too.

Before drawing definitive conclusions, it is worth laying some basic ground work. A third elephant…even if reliable records did span the globe in 1880…through today…a record length of 138 years is very short compared to the length of Earth’s long climate cycles. It would be the equivalent of saying, your body temperature averages 101F (versus 98F), based on one year, and in that  year, you got the flu twice and had high fevers for both. Do we know your body temperature averages 101F, based on that one “flu” year? Was it influenced by those flu episodes? If so, how much? And would your body temp have gone up naturally that year anyway, regardless of the flu?

It is also important to understand the terminology used in this science. We are talking about “Climatology” as well as “greenhouse gases”. Originally, the conversation began in earnest, some 30-35 years ago with 2 competing terms; “Greenhouse gas warming” and “”Global warming”. The first intimates that humans influenced the warming (like the flu in the above example), since greenhouse gas emissions have greatly increased since the advent of the automobile and are a known warming agent. The second is a more general term, which can simply refer to natural Earth “cycles” that we know have occurred over the millennium. The real rub, the difficulty, is prying these two apart during decades and centuries when both are or could be occurring simultaneously, and assessing which and how much of each are contributing to the temperature findings.

Pretend humans didn’t exist, for a moment. This may be a normal Earth warming cycle…where we are in a natural upswing. Now, bring humans back. If we are increasing the rate of increase, with only a 138 year data record to compare…for an issue that can last many centuries (natural warming), how does a scientist distinguish the human component from the Earthly one, and then quantify each? The track record makes that really difficult

That is not to dismiss human influence, not at all. Because of one simple fact; we know, in measurable and repeatable ways, that several gases we emit in huge quantities for the last 100 years, are definite warming agents. (And in fact, we actually do require some CO2 in the atmosphere, to keep Earth habitable.)

The terms for this topic have since become politicized, to the point where multiple terms have been created over time, to serve both real and political purposes, and the public has a hard time distinguishing one term from the other. The latest term, “Climate Change”, has become a one-size-fits-all type of term today.

It is a complicated issue. But regardless of the terminology used, and even regardless of what the cause is, (much less, if it can be altered or even adapted to), seeing 400 consecutive months of above average temperatures is enough to get anyone’s attention! Imagine if your electric bill or credit card statement or body temperature came in above what you expected…even for just a few months…it would get your attention enough to call the company, bank, or doctor to ask questions! 400 months is a long time. Especially consecutively. So, what were you doing, in February 1985?