Hail Alley – why does the front range see so much hail?

May 14th, a series of storms dropped so much hail in the Denver area it looked like a snow storm had rolled through.

This isn’t the first time a storm has dumped this much hail along the Front Range and it certainly won’t be the last. Colorado is part of a stretch in the United States known as "Hail Alley", and the Front Range is right at its heart. Colorado Springs and Denver see and have seen some of the most destructive hail storms in Colorado over the years and the answer to why those two spots see so much hail is actually pretty simple.

The Basics: How is hail formed? 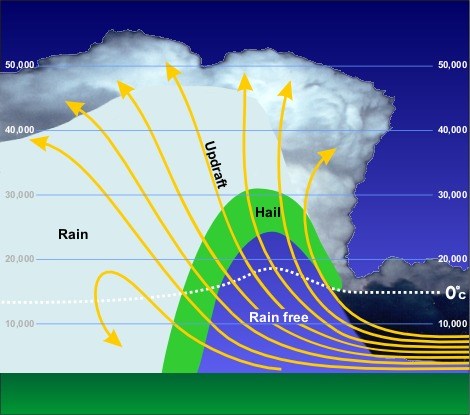 This hail explainer, courtesy of the National Weather Service, shows the basics of hail formation. The updraft of a storm carries moist air well into the storm cloud and rain is produced. Some of this rain stays liquid even as it enters air that is below freezing but the rest freezes into tiny ice crystals. These ice crystals can eventually grow bigger and turn into small hail as more and more rain freezes onto the hail.

The storm’s updraft will continuously bounce the newly created hail around in the storm and allow it to grow bigger and bigger and bigger. Eventually the hail stone gets too big to stay in the storm and it falls out with the rain as hail. Hail sizes can range from a pea to the size of a soft ball. The largest hail stone ever recorded fell in a field in South Dakota as was measured at 8 inches across!

Why does the Front Range get so much hail? 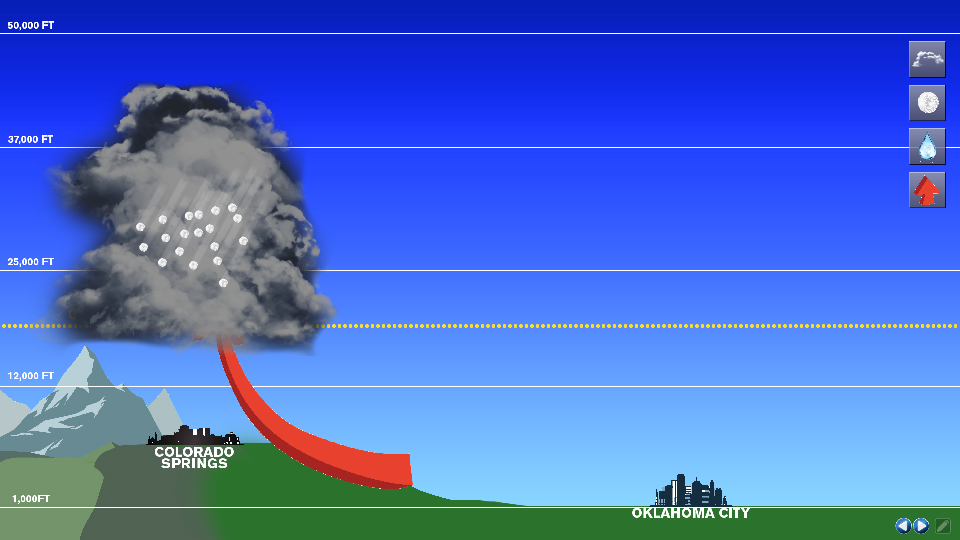 The answer is pretty simple: the front range is higher up than most other cities.

If you want to see hail, you’re going to want to be as close to the freezing level of a storm as possible (shown as the dotted yellow line in this graphic). As hail falls out of a storm and passes below the freezing line, it starts to melt and shrink. For most cities, Oklahoma City for example, small hail will fall out of the storm and melt down into rain before it hits the surface.

Colorado Springs and Denver are both seated much higher than cities like Oklahoma City. This means as hail falls out of a storm below the freezing level, it doesn’t have as far to travel down to the ground and so not as much of the hail stone will melt. This is why we get so much more hail compared to other cities, we’re physically much closer to the storm and the hail can stay frozen long enough to hit us.