Trump signed 4 executive orders; here’s what they are and how they could help 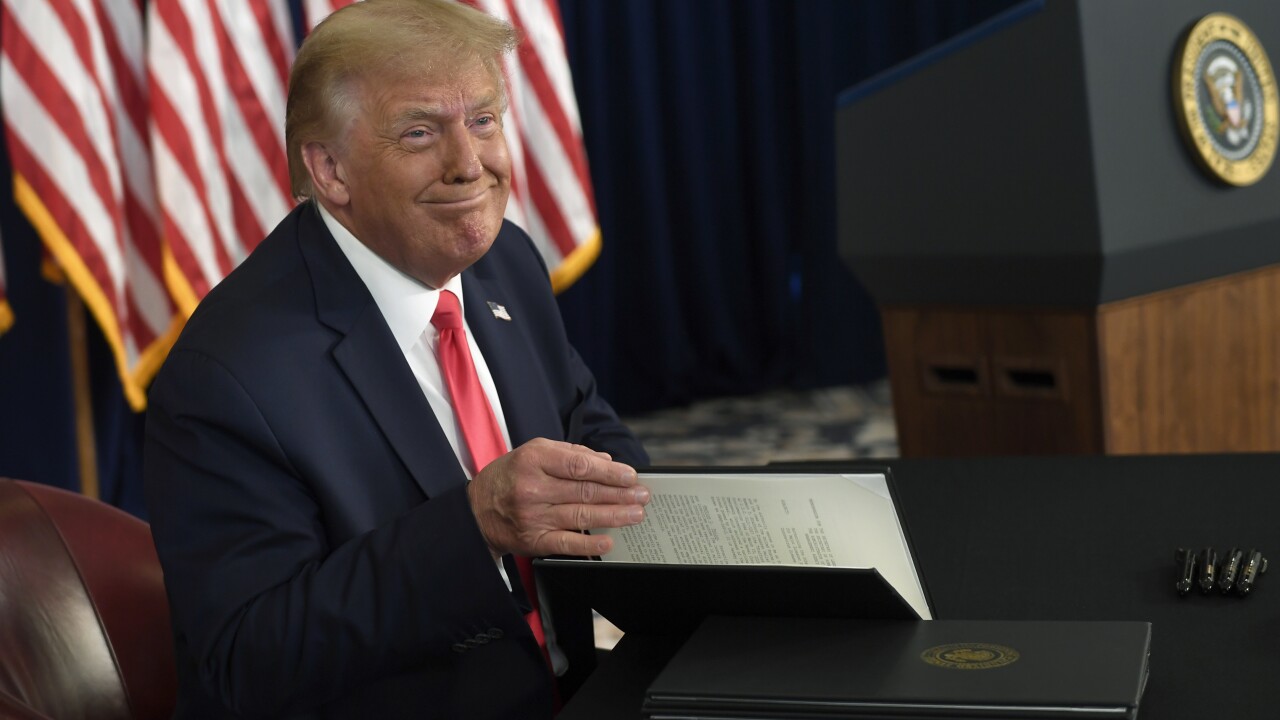 Copyright 2020 The Associated Press. All rights reserved.
Susan Walsh/AP
President Donald Trump smiles as he is about to sign four executive orders during a news conference at the Trump National Golf Club in Bedminster, N.J., Saturday, Aug. 8, 2020. (AP Photo/Susan Walsh)

Here is a look at what each one says and what next steps could be.

One of the most highly-anticipated and most debated executive order is focused on increased weekly benefits for those claiming unemployment. President Trump’s executive order would make it $400 a week and require states to provide 25 percent of the funds.

The CARES Act had added an additional $600 a week to what states offered in unemployment benefits. The funding came from the federal government for that added weekly benefit, and ended August 1.

It's unclear whether states have the money or the will to fund the new plan. Connecticut Gov. Ned Lamont says it would cost his state alone $500 million to provide the extra benefit through the rest of 2020.

He is one of several who have come out since Saturday’s announcement and expressed concern at states being able to afford to participate in the extra unemployment benefits.

Many states are already facing budget crunches caused by the pandemic. Asked at a news conference how many governors had signed on to participate, Trump answered: “If they don’t, they don’t. That’s up to them.”

By Sunday night, Trump clarified how the process could work, telling reporters states could apply to have the federal government provide all or part of the $400 payments. Decisions would be made state by state, he said.

On CNN’s “State of the Nation” on Sunday, White House economic adviser Larry Kudlow said conflicting things about whether the federal money was contingent on an additional contribution from the states.

Initially Kudlow said that “for an extra $100, we will lever it up. We will pay three-quarters, and the states will pay 25 percent.” In the same interview, though, he later said that “at a minimum, we will put in 300 bucks ... but I think all they (the states) have to do is put up an extra dollar, and we will be able to throw in the extra $100.”

A clarifying statement from the White House said the “funds will be available for those who qualify by, among other things, receiving $100/week of existing assistance and certify that they have lost their jobs due to COVID-19.”

The previous moratorium, which was part of Congress-approved aid earlier this year, ended at the end of July, leaving an estimated 12 million households potentially at risk that were protected. Some states have taken action on their own to extend the moratorium, but not all.

The original ban on evictions applied to mortgages that were backed by federal funds. By some estimates, this only covered about a fourth of the country’s rental units. The majority of units have private mortgages or owners and were not covered by the ban.

The new executive order signed Saturday states "the Secretary of Health and Human Services and the Director of the CDC shall consider whether any measures temporarily halting residential evictions of any tenants for failure to pay rent are reasonably necessary to prevent the further spread of COVID-19."

The president’s plan calls on the Housing and Urban Development and Treasury secretaries to identify any available federal funds to “provide temporary financial assistance to renters and homeowners" who are "struggling" to pay mortgages and rents.

“The health secretary has the authority, working with the CDC to declare it an emergency. And, therefore, there will be no evictions,” Kudlow said in an interview with CNN. He reaffirmed that if Health and Human Services declares an emergency, evictions will be stopped.

Kudlow added that the executive order sets up “a process. A mechanism. I can't predict the future all together. All the federally financed, single families and multifamilies will be covered as they have been.”

There has been no update yet on how long this process could take to identify available funds, and how much assistance the administration could provide.

Trump’s executive order on payroll taxes is a postponement of the collected taxes until the end of the year, and defers the due date for the portion of taxes paid by employees. Federal payroll taxes are roughly 6.2 percent for Social Security and 1.45 percent for Medicare.

The deferment would only apply to employees making less than roughly $100,000 a year.

Think of it like the deferring of federal income taxes, American still had to file and pay their taxes but they weren’t due until July 15.

President Trump during Saturday’s press conference on the executive orders said if he was elected president he would work to forgive the levy and make cuts to payroll taxes. However, many are clarifying that the power to change tax laws lies with Congress and not with the president.

The fourth executive order directs the Education Department to extend the student loan relief until the end of the year.

Loan payments and the accruing of interest on federally-held students loans is on hold right now until September 30. The executive order would move that date until December, and potentially longer. Trump eluded to possibly extending the deadline out further.

Trump originally waived student loan interest by executive order in March, and the policy was clarified to include pausing loan payments and included in the CARES Act passed by Congress.