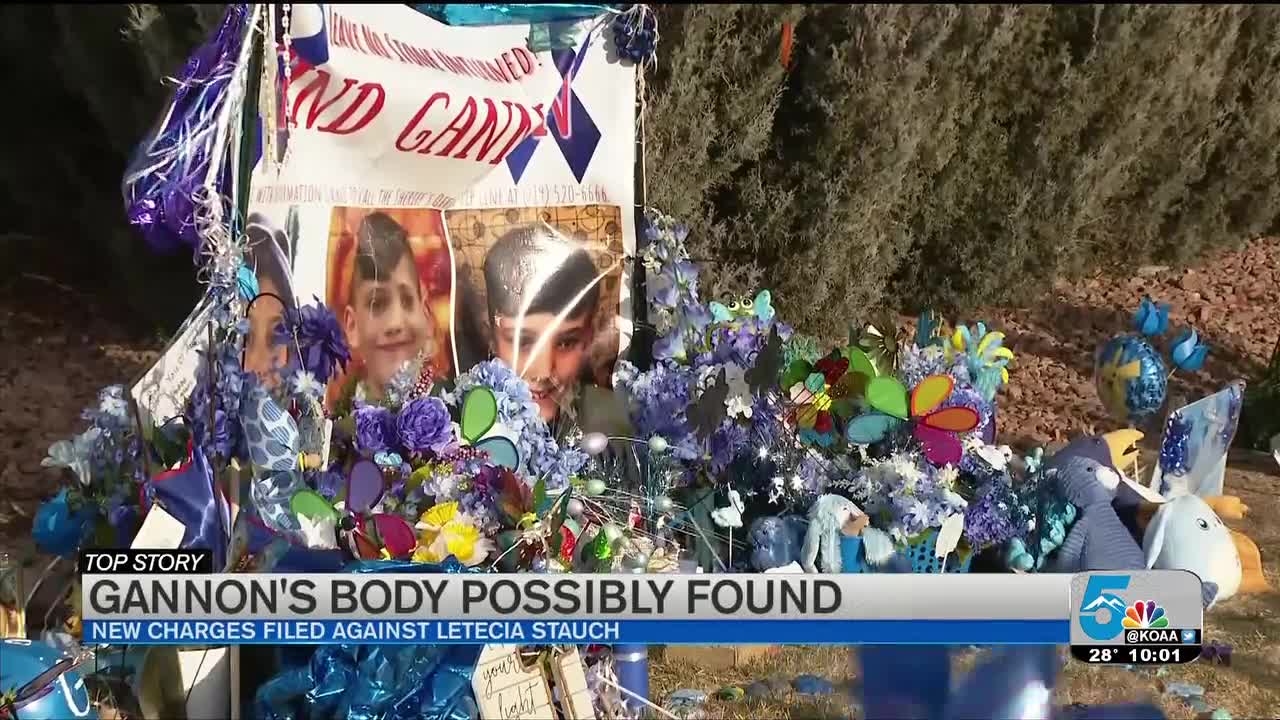 El Paso Co authorities have charged the stepmother of Gannon Stauch with additional counts after his body was found in Florida. 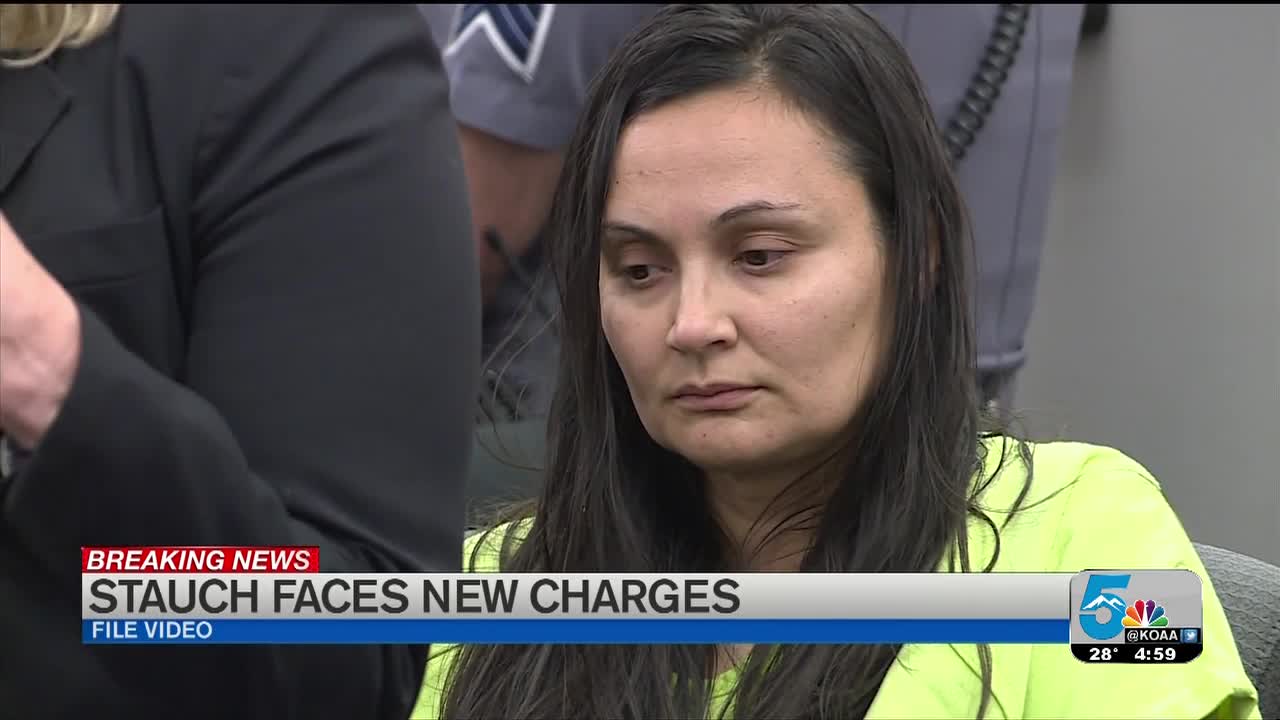 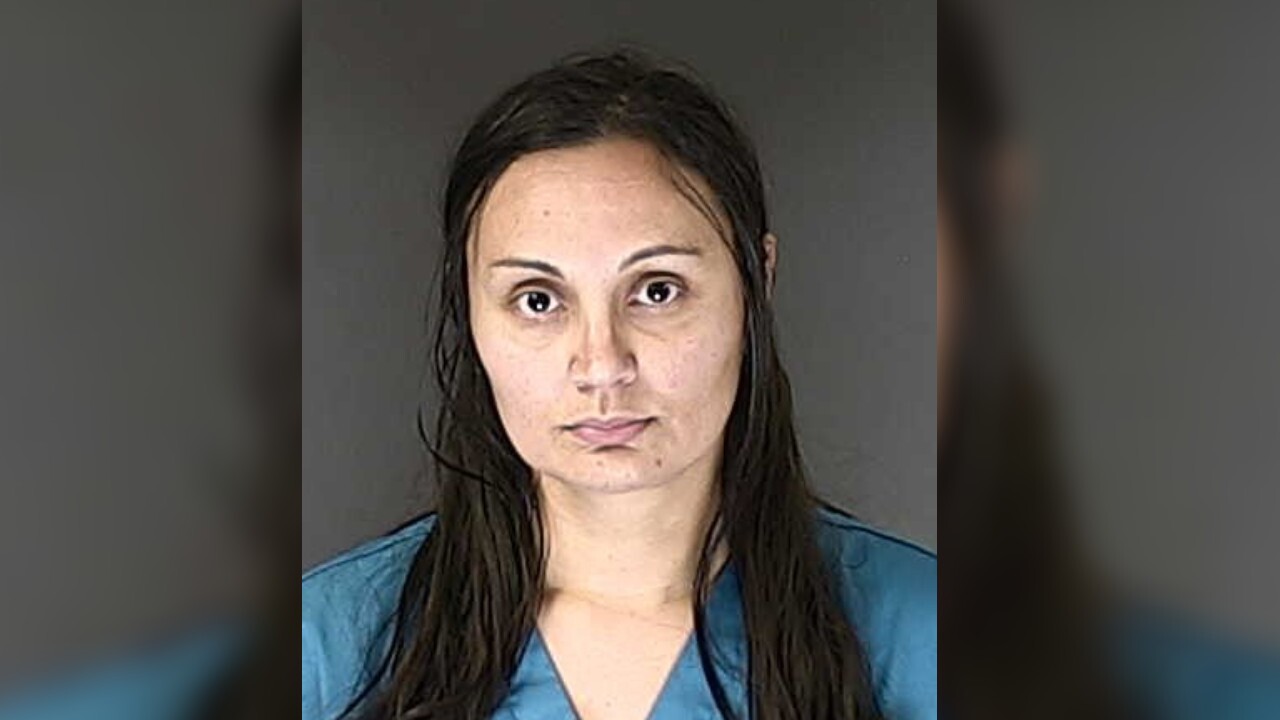 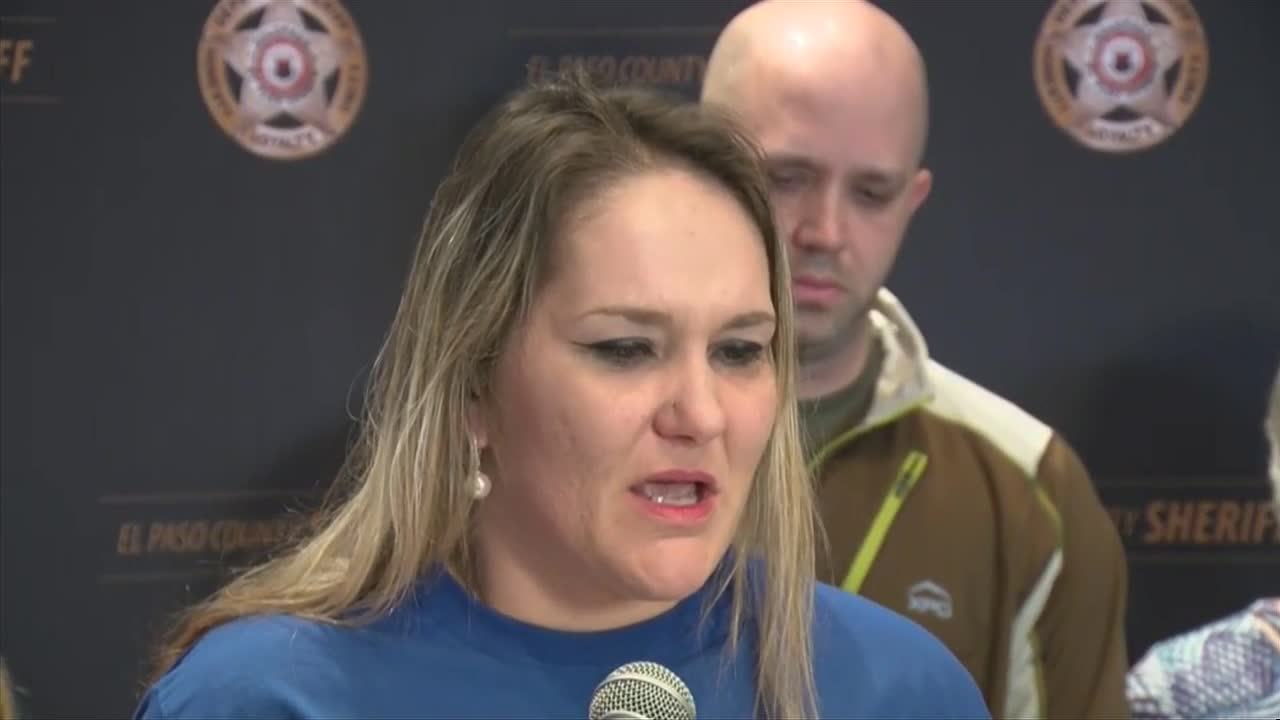 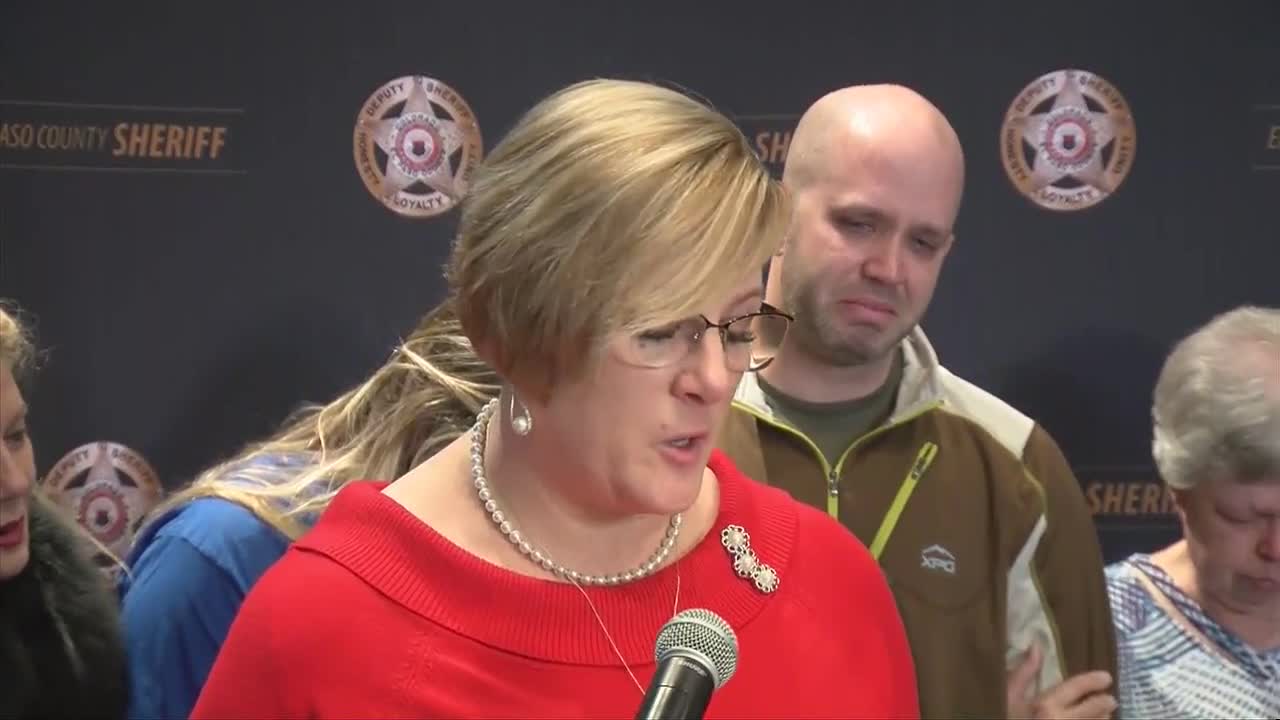 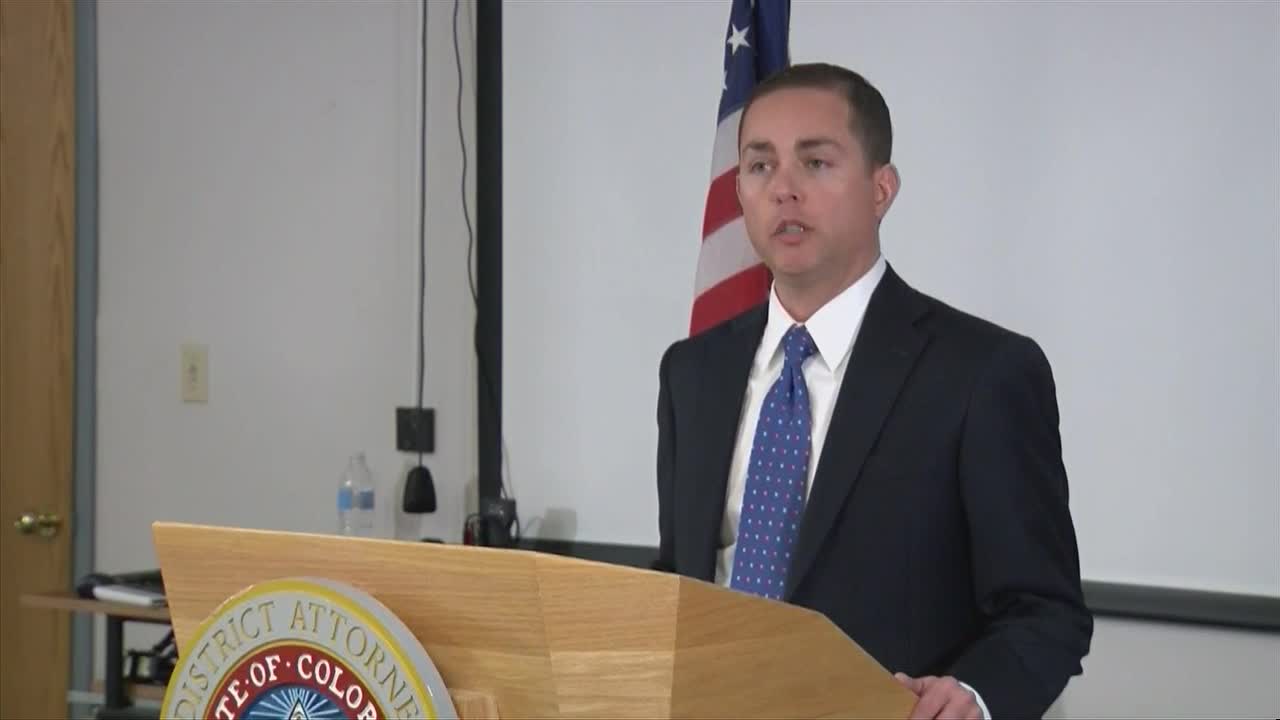 Al Stauch's statement is as follows:

I would like to take this opportunity to reach out to the community here in Colorado and all over the nation to express my deepest gratitude and true heartfelt appreciation for the overwhelming support.

Many of you have either requested or inquired about information from me or interaction with me throughout these past two months. As you can tell from the initial missing child report, to the arrest and charges in early March, and now the wonderful, yet gut-wrenching news that Gannon's body has been recovered, this has been a heartbreaking and absolutely devastating time period in my life.

I am a very private person anyways, but balancing my desire to show my great appreciation and my need to cope with the continually evolving devastation has not been easy. I thank each member of the community and media that has respected my privacy and need to process everything that has happened.

Those who I have personally trusted with information in the public have respected my privacy in an epic manner, and to those one to two people I owe you a lifelong debt of gratitude. If there is any question about whom I trust, take a look at who releases this statement. Anyone else is simply using me, my precious, heartbroken daughter, and my loving family as fodder for their personal agenda, which is absolutely despicable.

To those who are loving, supportive, and peaceful, thank you a million times over and God bless you all. I will more than likely not give any public interviews or statements until the end of the case, but I thank you all in advance for respecting my approach.

The sheriff's office said they received a call on Wednesday from the Santa Rosa Sheriff's Office in Pace, Florida, regarding a deceased boy. An autopsy was performed and the remains were tentatively identified as the 11-year-old Gannon Stauch.

Gannon Stauch has not been seen since Jan. 27 when his stepmother says he left to go visit a friend, according to prior information from the sheriff's office. The arrest of Letecia Stauch, his stepmother, was a result of thousands of hours spent in the investigation and searching for Gannon.

Deputy District Attorney Michael Allen would not answer most questions about the case due to a gag order, however he did clarify that authorities believe Gannon was killed in Colorado.

"We met with the family earlier today, and obviously they're distraught with this information. They were still holding out hope that Gannon would come home alive, despite the original charges that we filed in this case, and they're struggling, and they rightfully would be," Allen told reporters.

Potentially finding Gannon's body changes the case for the prosecution. "Anytime you have a homicide case, the body has a lot of evidence associated with it, and I'm speaking in only a general sense," Allen said.

News5 also spoke with a neighbor of the Stauchs, who said she still has questions. "How do you get from Colorado to Florida with a body and not be noticed? ... Justice will be served. If it's not here on Earth, it will be up in heaven," said Kellie Gasper, who is listed as a witness on the case.

The EPCSO is asking anyone for information if they have seen Letecia Stauch in Pace or Pensacola, Florida, between Feb. 3 through Feb. 5 to call the tip line at (719) 520-6666 or email tips@elpasoco.com.

A statement on Cynthia Coffman's Facebook account, who has helped the Stauchs facilitate media throughout this process, said this:

"The parents of Gannon Stauch wish to express their continued profound gratitude to all who have offered their prayers and support since Gannon's disappearance. Many reached out asking how they can assist the family, and memorialize Gannon.

For those who are moved to make a financial contribution at this time, there are two secure, designated funds approved by Landen Bullard Hiott and Al Stauch. They are:

Plans for Gannon's memorial service will be announced at a future date, as will opportunities to honor his legacy of love and heroism."

It also details witnesses from various businesses, such as gas stations, car rental businesses and banks.

At the press conference announcing her arrest on March 2, Gannon's parents made emotional statements.

Stauch arrived to the El Paso County Jail on March 5 after deciding to not to fight her extradition to Colorado on charges of first-degree murder, child abuse resulting in death, tampering with a deceased human body and tampering with physical evidence. Prosecutors announced March 11 they have not ruled out the possibility of pursuing the death penalty in this case.

Stauch is expected back in court on April 14 for a status conference. Prosecutors said they have to go over 100 search warrants in this case and some of those warrants are from South Carolina, while the majority are local.

KOAA is among media organizations who have filed a motion seeking the release of court documents in this case. A judge is currently considering the motion and is expected to make a decision soon. The judge ordered the defense get a copy of the unsealed affidavit on Wednesday in court.

It is standard in Colorado for an arrest affidavit to be available to the public after a defendant is formally charged, unless prosecutors or the defense make a viable argument that the release of the information would negatively impact the trial process. The prosecution said in court they would not object to the affidavit being unsealed.

Still, the prosecution reminded everyone these charges are allegations at the moment. "She is presumed innocent until proven guilty beyond a reasonable doubt," said Senior Deputy District Attorney Michael Allen.

For more on the Gannon Stauch case click here.