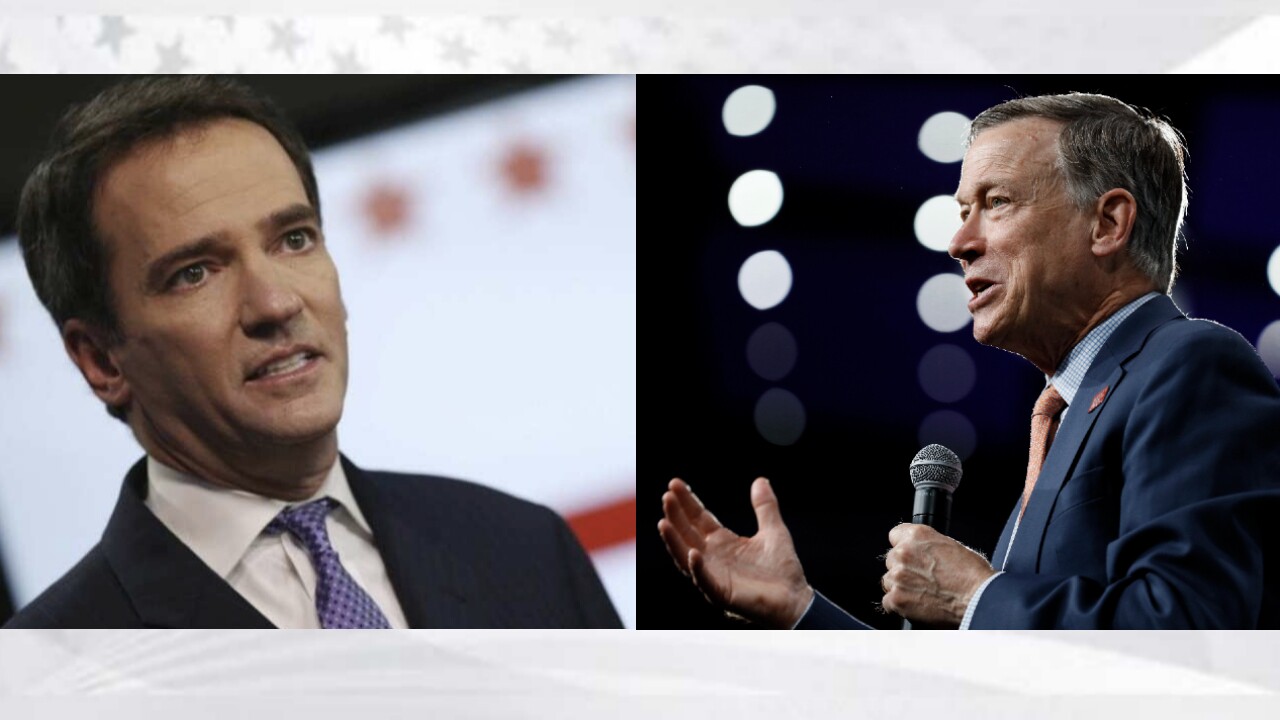 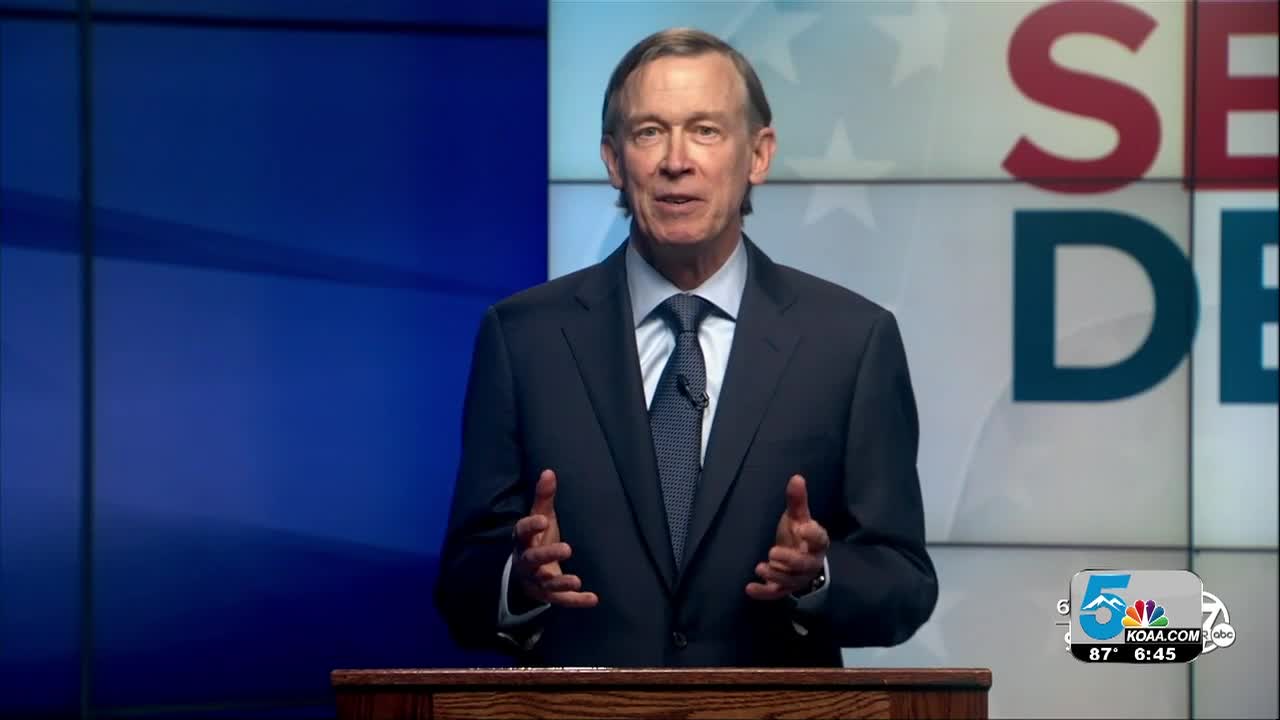 Democratic U.S. Senate candidates John Hickenlooper and Andrew Romanoff will participate in a debate tonight at 6 p.m. on KOAA's on-air and online platforms.

The 90-minute debate will be held in-studio at our station Denver7 and will be hosted by anchor Denver 7's Anne Trujillo, Denver Post political reporter Justin Wingerter and Colorado Matters host Ryan Warner.

The event is sponsored by Denver7, The Denver Post, Colorado Public Radio News and the University of Denver.

Ballots should already be in the hands or mailboxes of voters across Colorado for this race. The winner of the Hickenlooper-Romanoff primary, which will take place June 30, will face incumbent Sen. Cory Gardner, R-Colo., in November.

Gardner has already agreed to a series of debates with the primary winner. KOAA News5, The Gazette, and El Pomar Foundation’s Forum for Civic Advancement will host the first event on September 1, 2020.

Below, we’ll be updating this story through the night with live updates from the debate. Refresh the page for the latest updates.

Both candidates said they feel they have the best chance to beat Sen. Cory Gardner in November. Romanoff says he is best suited to defeat Gardner because of the grassroots support he has in the state, his record both in and outside of the legislature and a willingness to stand up to his party. Hickenlooper pointed out that Romanoff has never won a statewide election and hasn’t won an election in 14 years – and noted that he has never lost a statewide election and won in 2014, which he said was a difficult year for Democrats (it was also the year that Gardner was elected to the Senate).

Hickenlooper said he regrets disrupting the independent ethics commission hearing two weeks ago by disregarding a subpoena. Romanoff said he regrets a series of 2006 measures that targeted people living in the country and in Colorado illegally. “I wish I hadn’t done that and I regret it,” he said.

Romanoff was asked about his support for Medicare for All despite the presidential candidates who supported the proposal backing out of the race for Joe Biden. Romanoff says he’s seen some small concessions already from Biden in lowering the eligible age to 60 instead of 65. But he said that big changes that he supports will never happen if people continue to elect candidates that don’t support broader change.

On another round of yes/no questions, both said they do not support legal protections for a health care provider to refuse treatment to transgender people, as the Trump administration is seeking to do. They both said that DACA recipients should receive citizenship. Both said they favor increasing Social Security benefits, though Hickenlooper said he supported that “cautiously.” Neither answered a question on whether the Broncos should have signed Colin Kaepernick.

Hickenlooper is asked about a video of comments he made in 2014 about a slave ship that surfaced in recent days, which he says he acknowledges caused pain. He says he “deeply regret[s] them.” He says that there are reforms needed not only around police, but also housing and health care. On questions about how he had bad-mouthed the Senate before he decided to run, Hickenlooper said that he decided to “get in the ring and be part of the change.” He says he’s “more passionate about this campaign than any campaign [he’s] had in his life.”

On what actions they could take to address climate change soon, Romanoff says the country should end subsidies for oil, gas and coal companies and put them toward solar, wind and renewable energies. Hickenlooper says he believes climate change is “the largest existential threat” the planet has ever faced. He said he supports moving forward with what his and Polis’ administrations have started in Colorado.

Both said they have attended protests in recent weeks. Hickenlooper said he went with his son and kneeled for 8 minutes and 46 seconds. He said that was a “profoundly long period of time when you’re in such a solemn occasion.” Romanoff says he recognizes through the protests that “it’s clear I have not done enough, none of us have.”

Asked why people of color should vote for them and how they could have better affected change while they were in office, Hickenlooper says, “We didn’t get far enough.” He says he believes his mayoral and gubernatorial administrations did not get far enough on reform measures. Romanoff said that neither he, Hickenlooper and Gardner are all products of white privilege, notes the number of people of color who have already endorsed him, and pledged to surround himself with different people with different perspectives.

Both Hickenlooper and Romanoff say that the Elijah McClain investigation should be reopened. Romanoff says that he hopes to facilitate the creation of a national database of police officers who have committed misconduct and said that he supports many of the changes made by the legislature in SB 217. Hickenlooper said that he agreed with what Romanoff said and that he supports a bill introduced by Sen. Kamala Harris regarding a different definition of use of force.

The two candidates discussed their differences on health care insurance, with Hickenlooper saying that he supports a path to getting to universal coverage and Romanoff discussing his support for Medicare for All. On yes or no questions, both agreed on nearly every question -- regarding ballot issues on prohibiting abortions after 22 weeks (neither supports); increasing tobacco taxes (both support); moving to the National Popular Vote and eliminating the Electoral College (both support); banning assault weapons (both support); making Juneteenth a federal holiday (both support). On paying reparations, Romanoff supports and Hickenlooper says he supports a study and that there should "definitely" be some sort of reparations.

The first question is about the COVID-19 pandemic and how the state and nation can recover faster. Hickenlooper lauded Gov. Polis' actions so far and criticized President Trump's actions. He said that his priorities would be preventing widespread outbreaks and focusing on small businesses and their having extra resources for recovery. Romanoff discussed an "unholy alliance" of big businesses and focused capital leaving lower-income people "holding the bag." He also said that he hopes a vaccine can be accelerated.

KOAA News5 for iPhone and iPad

Learn how to get Amazon Alexa updates from News 5