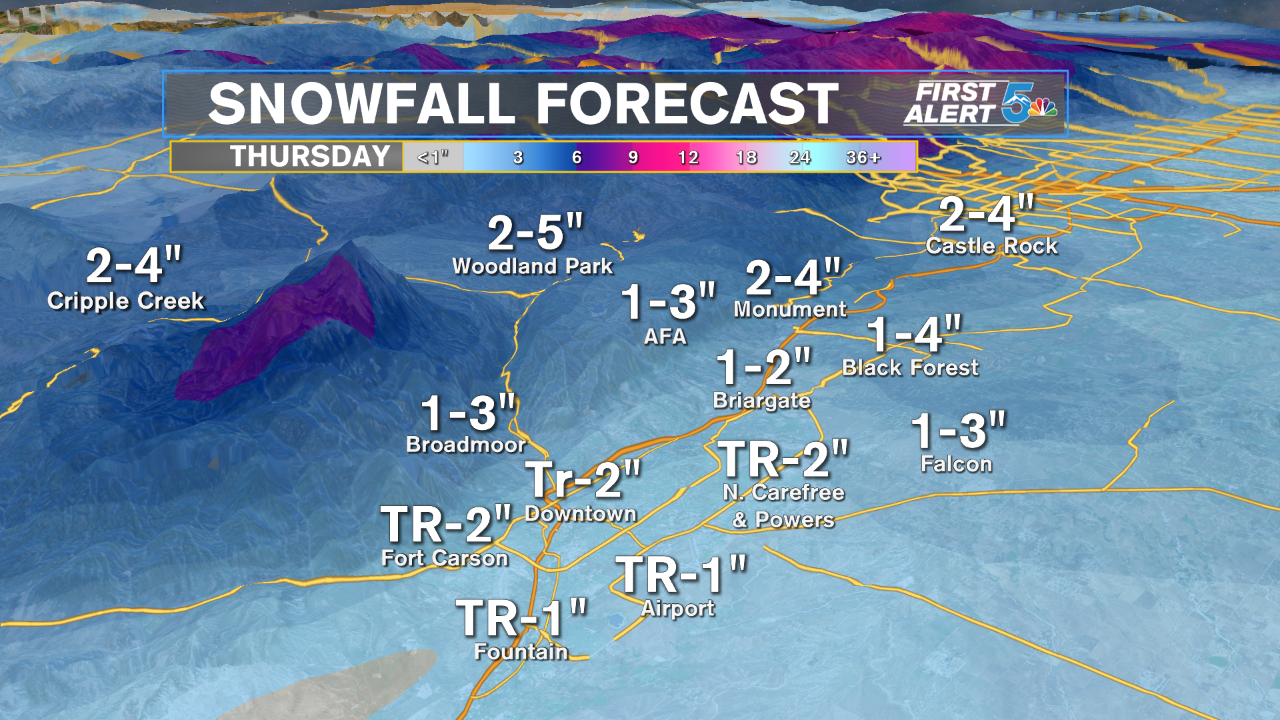 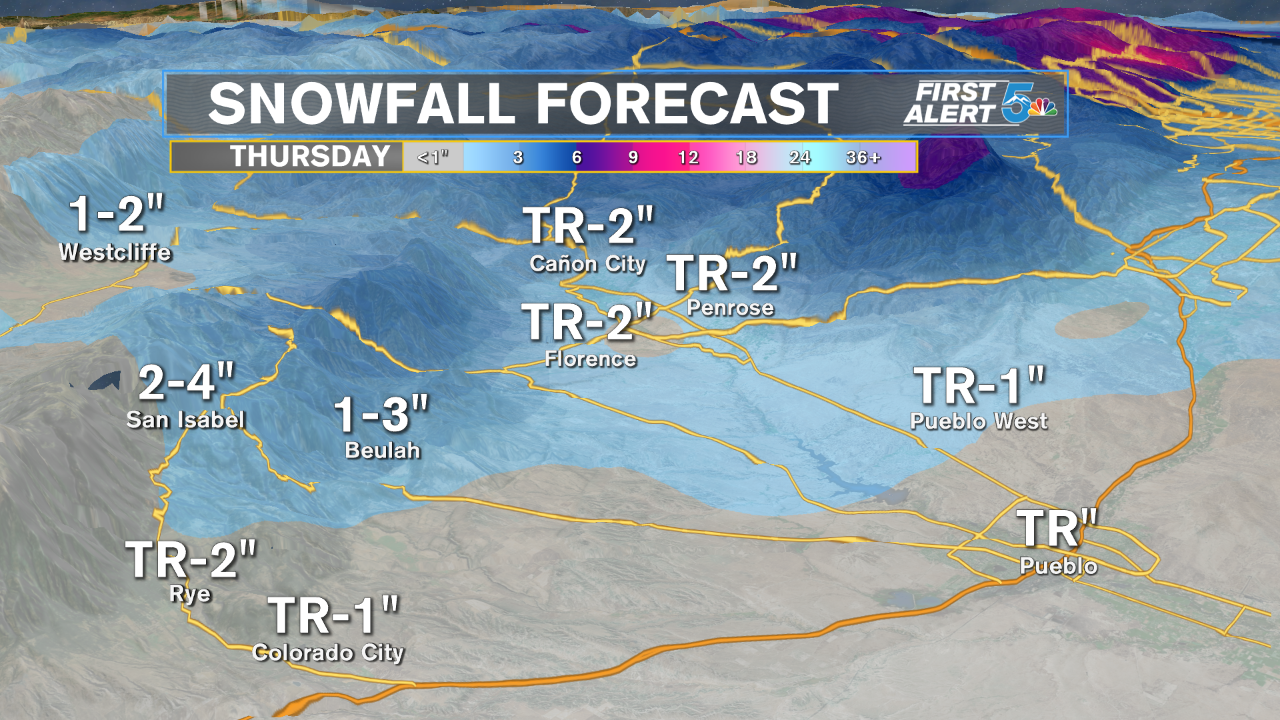 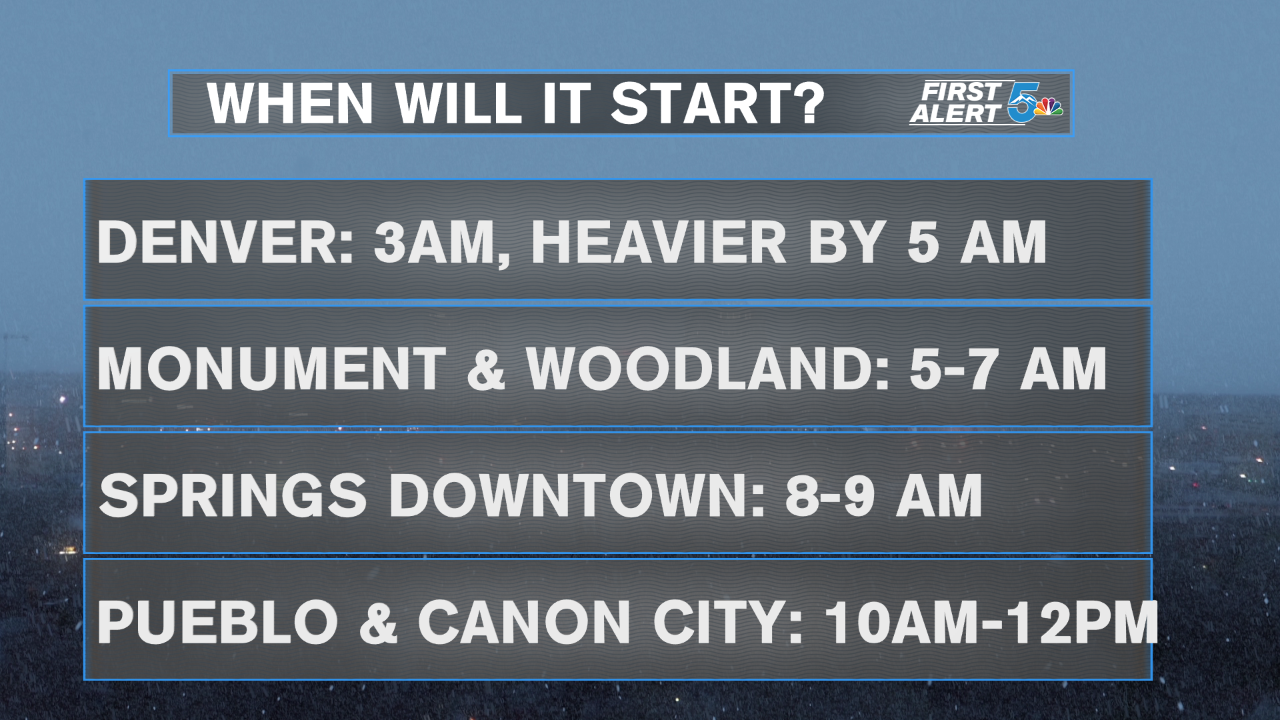 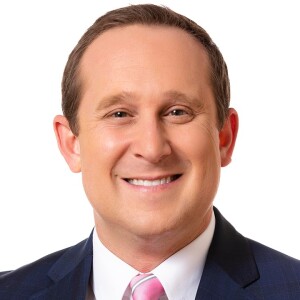 COLORADO SPRINGS — After a summer-like day on Wednesday, snow and a blast of cold air will dominate our forecast late this week. With the snow starting Thursday morning, some areas may see the effects during the morning commute. Here's the latest on the timing of the snow, and how much we expect to see.

With this system moving in from the north, snow will be begin to fall across the Denver Metro area before sunrise. Even though most of the Pikes Peak Region will be dry at this time, if you're traveling to the north, snow will be an issue on the roadways Thursday morning. Make sure to leave yourselves plenty of time if your plans take you over the Palmer Divide.

This system is going to be driven by a northerly wind component. This favors northern El Paso County and Teller County with the greatest storm impacts. Snow will begin falling by mid to late morning in Monument and the Tri-Lakes. Grassy surfaces will see snow accumulation first, but as the cold air continues to settle in, the roads will turn slick and snowy during the afternoon.

From the Springs southward into Pueblo, the morning drive will not be affected by the storm. Snow in these areas isn't likely until late morning to early afternoon.

Today's model runs have backed off on snowfall totals for the Plains, and the San Luis Valley. With the northerly wind component, not much snow will fall for southern regions. Most of the snow will be across the Pikes Peak Region, the Palmer Divide and the central mountains.

The Tri-Lakes area through Black Forest and west into Teller County will see the highest amounts of snow with this system. Travel will be impacted through the gap as early as Thursday morning, with greater impacts during the afternoon and evening commute. Snow totals in these areas could approach 3-5".

Snow totals will be less south of Monument Hill. The downsloping wind moving into the city will cut into the moisture supply, with amounts ranging from a light dusting to a couple of inches of snow. Timing points towards the lunch-hour to early evening being slow and potentially slick throughout the Pikes Peak Region.

We'll see lesser amounts of snow south into Pueblo County. In Pueblo city proper, snow totals should stay under an inch. Higher amounts will be seen across the Wet Mountains, with blowing snow possible at times. Along Highway 50, daytime temperatures will probably keep the roads wet and slushy. At night, the concern for ice on area roadways rises as temperatures will plummet down to the 10s and 20s.

Wind chill temperatures will dip pretty quickly behind the cold front. During the day on Thursday, wind chill values will hover in the single digits across northern El Paso County and the Teller County high country. Wind chill values in the Pikes Peak Region will fall through the 20s and into the teens by late Friday afternoon.

Once the snow ends Thursday night, bitter cold air will settle into Southern Colorado. In addition to a Freeze Warning that's in effect for northern El Paso County Thursday morning, Freeze Watches have been issued for most areas Friday morning. Sub-freezing temperatures in the single digits and teens will likely break records on Friday. It's best to prepare tonight before the storm hits by digging out your heavy winter coats, hats and gloves. Also, don't forget your ice scraper.

The First Alert5 weather team is keeping a close eye on the forecast, and will publish forecast updates before, during and after the storm Thursday.