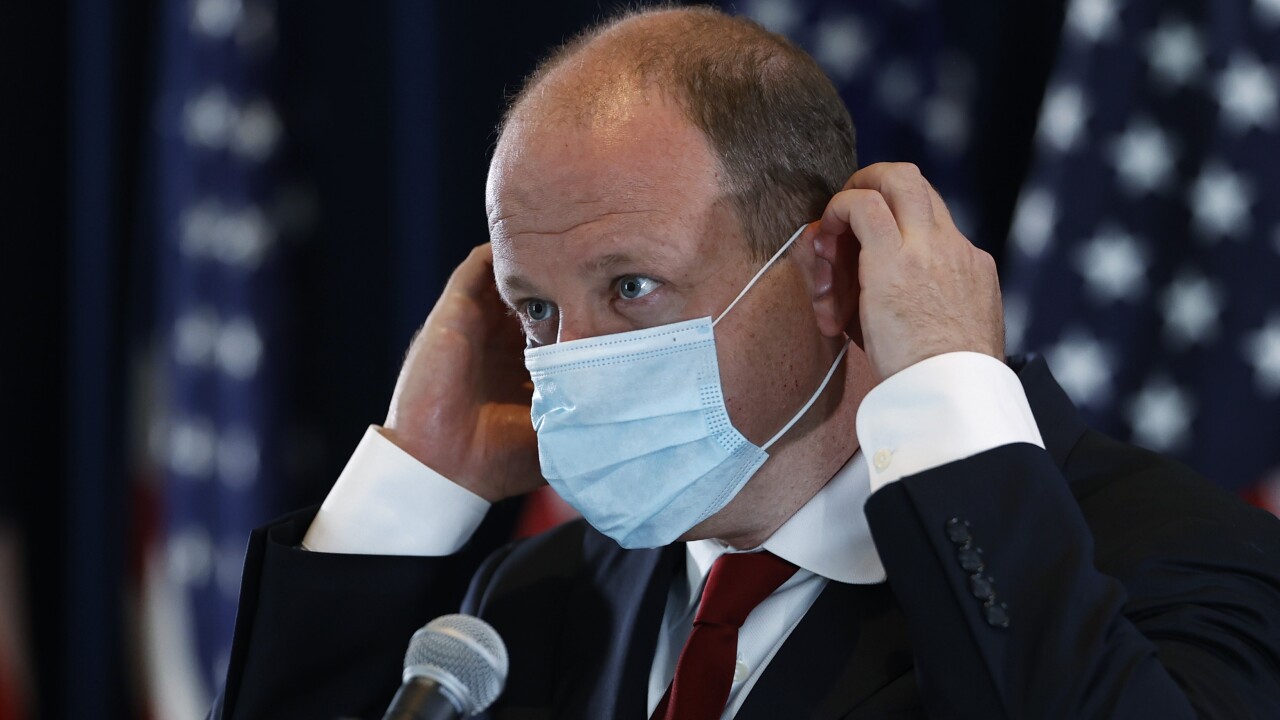 Copyright 2020 The Associated Press. All rights reserved.
David Zalubowski/AP
Colorado Gov. Jared Polis puts on his face mask as he leaves a news conference on the state's efforts to curb the spread of the new coronavirus Wednesday, June 24, 2020, in Denver. (AP Photo/David Zalubowski)

COLORADO — A new executive order that will require masks in all public spaces is now in effect in an effort to combat the rising rate of COVID-19 cases in Colorado.

Gov. Jared Polis announced the mandate Thursday and said it would be for "public indoor spaces," such as stores and businesses, unless someone "has a medical condition or disability that prevents them from wearing a mask" for those 11 years and older.

The executive order states owners or managers of a public indoor space must post signs at entrances "instructing individuals of their legal obligation" under the order. Those who cannot wear a mask medically, are hearing impaired or disabled where an essential part of communication is to see the mouth are exempt from this order.

More exemptions outlined in the order are individuals exercising alone or with others in their household and a face covering would interfere, those seated at a food service establishment and those receiving a personal service that requires the temporary removal of the face covering.

"We have to get control of this in our state," Polis said before announcing a new executive order requiring masks statewide in public spaces. He said the state has a choice between more mask-wearing or hurting the economy, meaning shutting down businesses again as the state did at the beginning of the pandemic.

Polis mentioned earlier this week that a mask mandate would be difficult to enforce, but he said that data shows wearing masks helps against COVID-19. He said local enforcement would be important in this mandate and that he believes this mandate would increase mask-wearing in the state.

The El Paso County Sheriff's Office has stated manpower issues will mean deputies are not actively enforcing the executive order, yet will respond to related calls for trespass. We're still awaiting word from the Colorado Springs Police Department.

Colorado Springs Mayor John Suthers, who served as Colorado's Attorney General told News5, "A executive order that directs something in regard to a health situation has the force of law. So yes, it is a law... You ought to do it, regardless of whether or not it's the law or not. We're in a very critical period right now," said Suthers.

READ MORE: How will police enforce mask mandate in Colorado?

"We hope that making these changes now...we hope to avoid the kind of situation that south Florida is in, that parts of Texas is in," he said.

He reiterated that wearing a mask is not the only step that needs to be taken and that Coloradans need to continue practicing social distancing as well as washing hands regularly. The executive order also states it does not prevent counties or municipalities from issuing more protective standards.

"We need to live here in Colorado in a sustainable way like we did in early May and early June," he said. Polis described the state of COVID-19 cases in Colorado as "alarming" and that wearing a mask "is not a political statement."

Polis announced there would be a two-week pause on issuing new variances to counties across the state and counties with variances in place that are experiencing a rising level of cases "must take bold and urgent mitigation steps" to help suppress the virus.

"The growth of our cases has increased," Herlihy said while comparing data from the last week of June and the first week of July. The state is also facing an increase in the reproductive number, which represents the acceleration of the number of cases in the state.

The upward trend of COVID-19 cases in Colorado over the past several weeks is a troubling indication of where the state might be heading if residents continue to be “complacent,” Polis said earlier this week.

“I’ve been more direct than normal in asking Coloradans to wear masks. That’s because I care deeply about Colorado,” said Polis during Tuesday’s briefing. “And frankly I’m worried that Coloradans are taking a fragile success relative to some of our neighboring states as somehow a signal that we’re out of the woods, when that’s far from the truth.”

The executive order will expire 30 days from July 16 unless extended by the governor.

How will police enforce mask mandate?