Colorado dogs being trained to comfort others in crisis 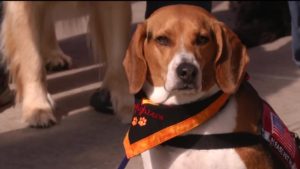 BLACK FOREST- In 2012, Colorado experienced a summer of crisis and tragedy. From the Waldo Canyon Fire in Colorado Springs to the Aurora Theater Shooting- many Coloradans felt the grief and loss of tragedies.

Days after the Waldo Canyon Fire ripped through Northwest Colorado Springs, Nancy Trepagnier along with her two dogs Snickers and Tabor began comforting those who had lost their homes.

For Trepagnier, “Go Team Therapy, Crisis, and Airport Dogs” is a way to honor her son, who passed away.

Snickers, one of the founding dogs passed away in February this year- but Tabor and Trepagnier are still teaching others how to comfort people during the most challenging times.

The organization is now national, with 600 dogs across the nation and other groups in places overseas. Recently, dogs were taken to comfort others in Virginia Beach after a mass shooting killed a dozen people Friday.

More than 60 dogs are trained as therapy dogs for the group in Colorado. These dogs go into libraries, schools, and airports on a regular basis.

Over the weekend, Trepagnier along with firefighters in Black Forest trained a few dozen pet owners and their dogs how to become therapy dogs. The training began in Denver on Saturday.