PUEBLO – The situation is dire.

Other shelter providers are traveling to Pueblo to transport animals out of the now-closed Community Animal Services of Pueblo (CASP) Shelter operated by PAWS for Life. Investigation reports released earlier this week show disgusting conditions inside the shelter, like feces on the floor of operating rooms, expired medications and dogs that hadn’t been treated in a proper amount of time.

While PAWS for Life’s license has been revoked for the property, News 5 is taking a look at how the situation unraveled to this point.

It starts in late 2018 when the community debated whether Pueblo Animal Services, a branch of the Humane Society of the Pikes Peak Region, should stay as the operator or be replaced by PAWS.

Public meetings before both the Pueblo City Council and Pueblo County Commission drew large crowds and pointed public comments from people on both sides.

“I would also ask you to award it to PAWS, because we don’t need a divided community,” one person said, advocating for PAWS.

“Sometimes, the least expensive product is not necessarily going to be the one that saves you money in the long run,” a fan of Pueblo Animal Services said.

The comments were valued, but the decision was greatly guided by a commission chosen to score both of the competitors. It consisted of two city employees, two county employees and a citizen representative.

They used a 100-point scale, and the scoring reveals different ‘winners’ based on how you look at the final tally.

Head-to-head, the committee preferred Pueblo Animal Services 3-2. If you looked at the average score, though, PAWS had the advantage 87.6 to 83. 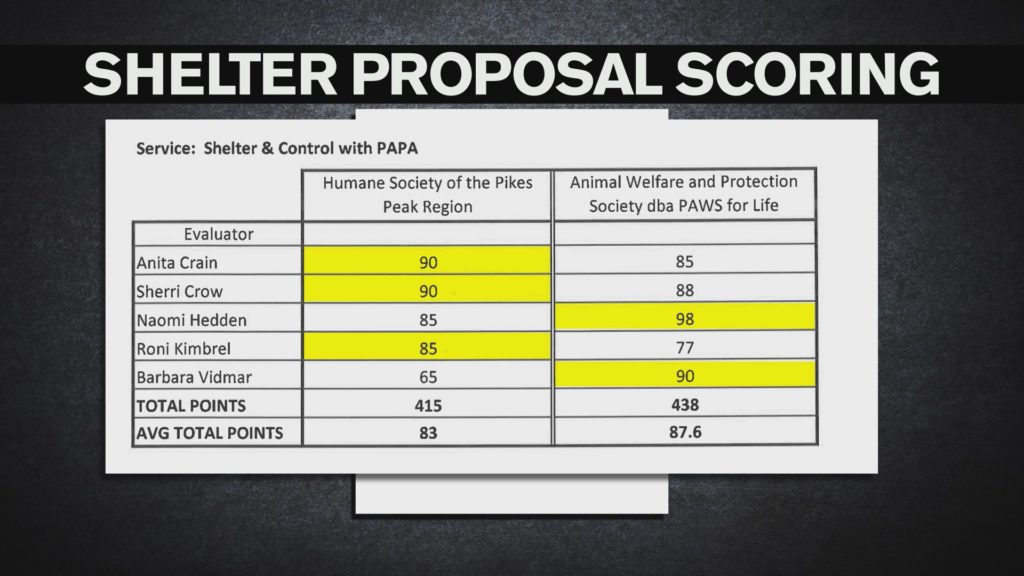 Eventually, PAWS was chosen as the winner. Their bid, $1.7 million, was $500,000 cheaper than Pueblo Animal Services.

“We’re incredibly disappointed. We’ve served this community for 16 years and really care about the people and the animals,” said Jan McHugh-Smith, president and CEO of the Humane Society of the Pikes Peak Region.

The reports also include comments from the commission. One document shows why someone scored Pueblo Animal Services with a 65, because the group requested an extra $230,000 to comply with the Pueblo Animal Protection Act.

Another person, in the comments, wondered if PAWS was stretched to handle the shelter with current resources.

City and county officials are meeting Friday morning in an executive session to discuss both short-term and long-term plans for the joint-operated shelter.