PUEBLO –  A new report from the Department of Defense is shedding more light on just how much of a problem sexual assault and violence claims continue to be at the three U.S. military academies.

The report from the 2017-2018 academic year centers on West Point, the Air Force Academy and Naval Academy – but it’s also highlighting the important ways they’re making a change.

“While the overall prevalence of sexual assault increased this year, reporting of the crime remained at about the same as last year.

Among these reports, 69 were Unrestricted and 48 remained. Restricted at the close of the academic period. The United States Military Academy observed an increase in reports of sexual assault, receiving 56 total reports (43 Unrestricted and 13 Restricted Reports), up from 50 reports last year.

The United States Naval Academy received 32 reports (17 Unrestricted and 15 Restricted), an increase of three reports from the previous year.

Though, these estimates only increased for women at West Point and the Air Force Academy.

While estimates for men only increased at West Point.

The report also identified the following four key areas academies must focus on, which includes improvement in reporting. 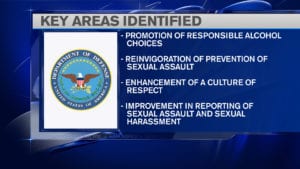 Kristi Roque with the Pueblo Rape Crisis Center works with victims of sexual violence and says reporting is often the biggest hurdle.

“Within a closed system like the military, you’re concerned that there will be backlash for reporting,” she said.

But the Air Force Academy is eliminating those barriers.

Superintendent Lt. Gen. Jay Silveria sent News 5 the following statement in which he highlights their policies, like “Safe to Report”:

“We are fully engaged in the fight against sexual harassment and sexual assault at the Academy. Harm to any one of us is unacceptable, and we will not rest until every cadet at the Academy is in an environment where they can focus solely on their professional and personal development as exceptional leaders of character in the U.S. Air Force.

As leaders, we remain committed to tackling this issue head-on. We’ve already taken numerous steps in the past year including changes to our alcohol policy, implementation of a ‘Safe to Report’ policy encouraging cadets to come forward without fear of punishment for minor misconduct, and progress on implementation of an anonymous reporting option to eliminate perceived reporting barriers. We have worked diligently to create new programs and adjust existing ones in order to better serve our cadets.

With support of the Secretary of the Air Force, we will aggressively work to further the national dialogue on sexual assault and harassment prevention. In April she, other service secretaries, civilian college and university leaders, DoD and academy leadership, subject matter experts and members of Congress will hold a summit to discuss the scourge of sexual harassment and assault facing colleges and universities. We are excited to attend this summit as we focus on best practices and continue to work toward a culture that will not tolerate harm to one another, where survivors are empowered to come forward, and where anyone violating our values is held accountable.”

For Roque, it’s a step in the right direction.

“They’re moving forward,” she said.
“And taking an important first step to say ‘we have a problem, we are identifying ways to improve on this problem.'”

Academies started new programs in September of last year, so this report doesn’t reflect their impact yet.

You can read the report in it’s entirety here.