While trade talks between the United States and China have stalled, news on Tuesday night that the trade war may escalate even more. President Trump saying his administration is preparing to extend 25% tariffs to practically all Chinese imports not already hit with duties, including toys, sneakers, shirts, alarm clocks, toasters and coffeemakers. American businesses and consumers will pay the tab on the higher taxes imposed on these products. 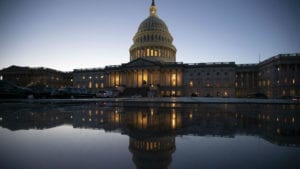 All the while, President Trump downplaying the dispute, saying it’s nothing more than a quote “little squabble” between friends, but one that is estimated to be costing the American economy three billion dollars a month, and could hit middle class families hard, along with major job losses down the road if this extends beyond just a couple more months.

The President continues to insist that the U.S. has been treated unfairly by China, “for many, many decades and says he thinks things will “turn out extremely well” because, “We’re in a very strong position”.  Asked by reporters before traveling to Louisiana on Tuesday, who’s winning, the President said “we always win”.

On capitol hill, his Republican allies are scrambling to soften the blow from his trade war amid mounting anxiety from farm-state lawmakers. They fear that the protracted battle and escalating tariffs could irreparably damage their local economies.

Vice President Mike Pence met privately Tuesday with Senate Republicans for a second week in a row. He urged them to stick with the White House.

Senators are working with the administration to craft a relief package for farmers and ranchers, some $15 billion that President Trump announced this week would be coming soon That would be on top of the $12 billion already authorized. Details of the new relieft package remain in flux. Senate Majority Leader Mitch McConnell says the one thing all agree on is “nobody wins a trade war.” McConnell says there’s hope Trump’s tough tactics will produce a better deal.

Despite the jitters by investors here and around the world, the stock market bounced back on Tuesday, with all indexes closing on the up side, after major losses on Monday after China announced it’s retaliatory tariffs on $60-billion in U.S. imports.