Denver is the first American city to vote in favor of decriminalizing psilocybin mushrooms.

Initiative 301 barely passed with a 50.6 percent majority and is set to go in effect this week. We’re breaking down the specifics of the initiative and talking about how this unprecedented move could play out in this 360° Perspective. 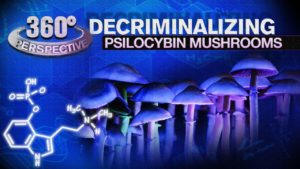 Here are some basic facts about so-called “magic mushrooms” from drugpolicy.org:

Here’s what Initiative 301 does:

To clear up some confusion it will still be illegal to sell and distribute mushrooms.

As far as crime trends in Denver the impact of decriminalization will be relatively low.

According to the police department and DA’s office in the last three years, Denver has averaged 52 mushroom-related arrests. They prosecuted 9,200 drug cases and only 11 involved psilocybin- of those only three were for “intent to distribute.”

Denver City Council has the power to intervene by changing the way the initiative works or by slowing its implementation.

That’s what happened in 2016 when voters approved business licenses for public consumption of marijuana in the city. Council implemented more restrictions than what voters passed and today there is only one officially licensed social consumption business. The city’s DA and the mayor had opposed the initiative before the vote.

Much like the movement to decriminalize and eventually legalize marijuana the group “Decriminalize Denver” has cited medical reasons as their motivation for change.

The mushroom advocacy group “Multi-Disciplinary Association for Psychedelic Studies” website has links to several ongoing and fully published scientific studies on psilocybin and its effects.

Advocates in Colorado hope this is the first big step toward full legalization of psilocybin mushrooms.

There are those against this movement as well.

Jeff Hunt is the Director of Colorado Christian University’s Centennial Institute, he says, Denver is quickly becoming the illicit drug capital of the world. He worries we have no idea the long term health effects of these drugs.

And a reminder psilocybin mushrooms are federally classified as an illegal drug by the DEA.

This report was produced by Logan McCrary.
If you have an idea for a 360° Perspective email 360@koaa.com.