360° Perspective: Border by the numbers

COLORADO SPRINGS – One of the biggest issues facing our country right now is the border wall.

President Trump and his team insist securing the southern border is necessary to national security and to help stop the drug trade and human trafficking. Opponents say there’s no such thing as a ‘crisis’ at the border and the issue is being used as a distraction.

Ahead of another potential government shutdown this week over border wall funding we are breaking down all sides of the issue in our 360° Perspective. 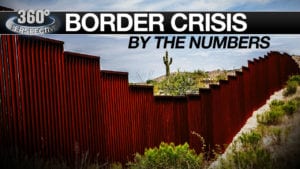 Here’s some numbers from U.S. Customs and Border Protection (CBP) from year 2017:

On a typical day CBP agents process more than a million people. The majority of them travel by land.

Out of all the people crossing at the ports of entry by land, on any given day, there are about 900 apprehensions, 600 refusals, and 21 arrests of wanted criminals.
On average about 1,600 are listed as having ‘national security concerns.’
Also, about 6,000 pounds of drugs are seized.

CBP said at the southern border, crossing are starting off at a relatively high level compared to the past five years. In January 2019 alone there were 47,000 people apprehended between ports of entry. And the average has been close to 50,000 a month the past few months.

For 2018, CBP said nearly 400,000 people were apprehended trying to cross the border in places that didn’t have ports of entry. President Trump has said there are frequent arrests of known dangerous gang members and apprehensions of illegal and dangerous drugs at the border as well.

According to the Pew Research Center illegal immigration is declining. As of last November they said the number of illegal immigrants living in the U.S. was lower than any time since 2004.

We hear so much back and forth on border issues we thought we’d give you this snapshot of the most recent numbers and let you decide what to think.