COLORADO SPRINGS – What a difference a year makes.

March 2018 was only the start of a devastating year for wildfires in Colorado. On March 16, a live-fire training exercise on Fort Carson ignited a fast-moving brush fire. The Carson Midway Fire eventually destroyed three structures, burned 3,300 acres and forced hundreds to evacuate.

This year, fire danger across southern Colorado isn’t nearly as high as it was in 2018, but that doesn’t mean we can’t expect a fire-free year.

It’s thanks in large part to an increase in winter precipitation, according to News 5’s Lead Forecaster Mike Daniels.

“Fortunately, we’ve had more snow this winter than we did last winter. In fact, in February, we had higher than average snow totals in both the Springs and Pueblo, so we’re in much better shape this summer than we were last summer at this time,” Daniels said.

The National Interagency Fire Center releases a ‘Significant Wildland Fire Potential Outlook’ at the start of each month. It gauges fire danger across the country on three different levels: below normal, normal and above normal.

In 2018, much of southern Colorado was already classified as above normal for fire danger in March. The state, and much of the West, is now back to normal levels for 2019. 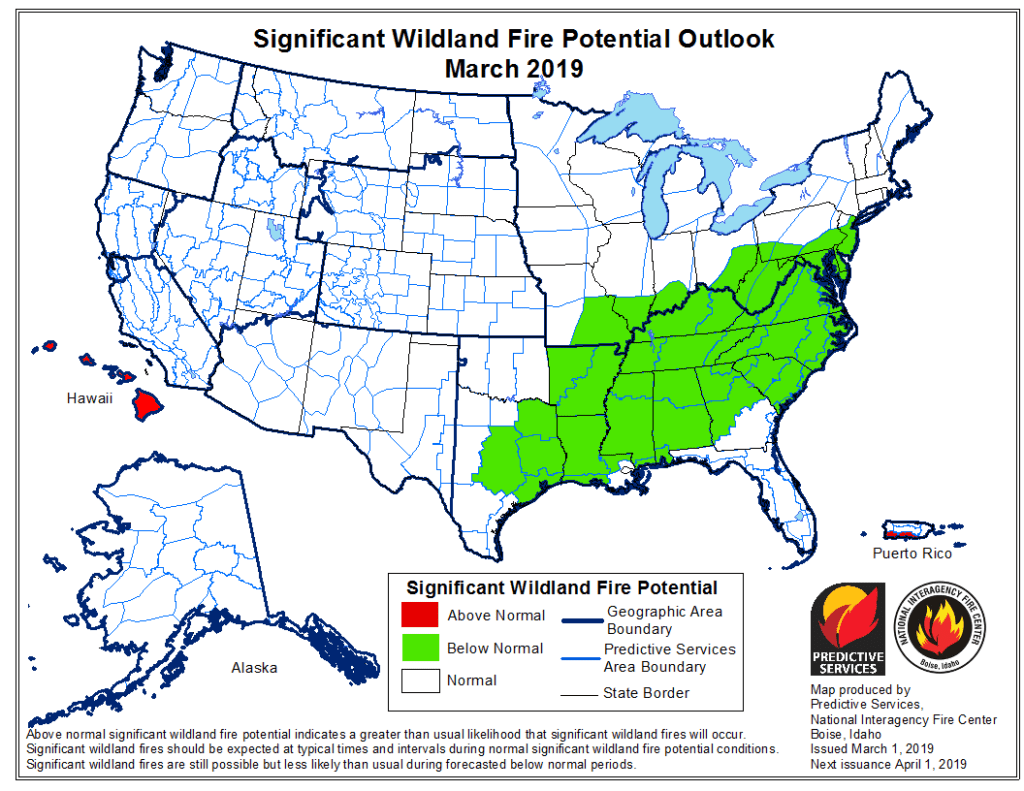 Jeremy Taylor, program administrator for the Colorado Springs Fire Department’s Wildfire Mitigation Section, said the prediction provides a welcome sight for the public. At the same time, low fire danger levels do not equate to the absence of fire altogether.

“When we look at those kinds of models, we just know that we need to prepare for the worst, in which we do. And we just know that based off those models, that doesn’t mean that we don’t have fires. That just means we don’t necessarily have the right conditions where the stars align for these big, big wildfires, Waldo Canyon-type events,” Taylor said.

The level of fire danger across the nation is a never-ending cycle, where precipitation serves a double-edged sword-type of role. Consistent moisture throughout the winter months keeps fire danger low as spring arrives, but it also helps vegetation grow.

Once the moisture goes away, it leaves larger amounts of vegetation dry and ready to burn, leading to fast-moving grass fires.

Taylor said it’s likely, based on these models, that southern Colorado will experience a heightened danger around fall.