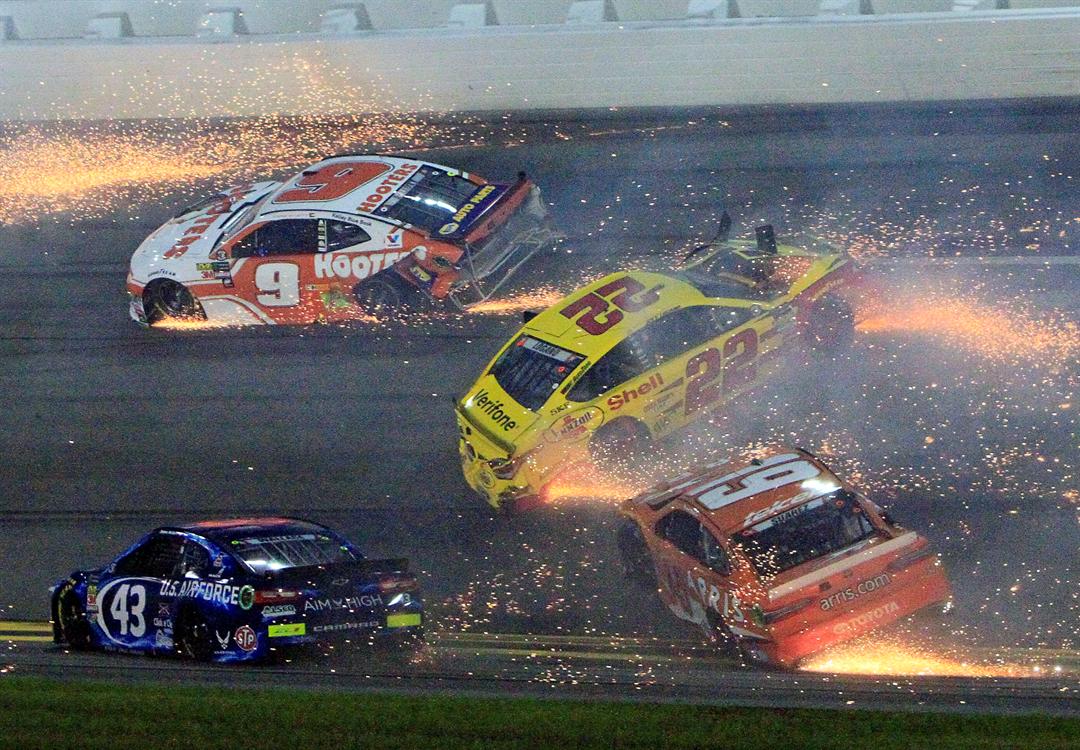 The Latest on the NASCAR Cup Series race at Daytona International Speedway (all times local):

Ricky Stenhouse Jr. got caught in a wreck after causing two earlier at Daytona.

Kyle Larson spun sideways coming out of Turn 4 because of a flat tire, and Stenhouse slammed into him. A huge piece of Larson’s rear bumper got caught on the front end of Kevin Harvick’s No. 4 Ford.

Stenhouse’s luck was met with cheers after the Roush Fenway Racing driver started two accidents that wrecked more than half the field in Stage 2.

Seven-time NASCAR champion Jimmie Johnson was leading when the wreck happened, but was penalized one lap for pitting outside his box during a stop a few laps earlier.

Stenhouse also won the first stage, his first of the stage victory year.

Stenhouse started two accidents in the second stage, wrecking more than half of the field. Stenhouse started a 25-car accident early in the 400-mile race and then took out two more contenders a few laps later.

"It’s been crazy partly due to a few of my issues," Stenhouse told NBC broadcasters during the race.

Stenhouse tapped Kyle Busch and caused him to lose control. Busch’s No. 18 Toyota slide right and took out William Byron. Byron and Busch were running 1-2 at the time.

Ricky Stenhouse Jr. has wrecked more than half the field at Daytona.

Stenhouse started a 25-car accident early in the 400-mile race and then took out two more contenders a few laps later.

Stenhouse tapped Kyle Busch and caused him to lose control. Busch’s No. 18 Toyota slide right and took out William Byron. Byron and Busch were running 1-2 at the time.

"Disappointing to get crashed out by the guy that caused the first crash," Busch said.

"The Big One" happened early in the Cup Series race at Daytona, and it involved more than half the field.

Defending race winner Ricky Stenhouse Jr. started the melee when he tapped and turned Keselowski, who was running third. Keselowski’s No. 2 Ford slammed into the side of Busch, and more than a dozen cars were unable to slow down.

Keselowski said it actually started with a "bad block" by William Byron, who cut in front of Keselowski and prompted him to lift off the gas.

"The 2 got wrecked and so did everyone else," Hamlin said. "It usually happens much later in the night."

Added Logano: "When one car sits sideways in front of the field at 200 mph, you can’t get through it."

Stenhouse took the lead from Chase Elliott after 11 laps and then held off a late run from Kyle Busch to take the checkered flag and earn some bonus points. It was Stenhouse’s first stage win of the year.

Michael McDowell, who finished ninth in the season-opening Daytona 500, was running second much of the stage before making a mental error and falling way back.

Defending series champion Martin Truex Jr. was penalized during pit stops for having an uncontrolled tire on pit road.

Chase Elliott is on the pole and the green flag has dropped for the start of the NASCAR Cup Series race at Daytona International Speedway.

Elliott and Hendrick Motorsports teammate Alex Bowman are on the front row at Daytona, a needed boost for both the team and manufacturer Chevrolet.

Chevy is trying to snap a 0-for-17 streak. It’s the longest losing winless stretch for the American manufacturer since a 31-race drought in 1981-82.

Austin Dillon gave Chevy its lone win of the season at the season-opening Daytona 500. The American automaker hasn’t been to victory lane since and hadn’t really gotten close to a checkered. Toyota and Ford have pulled away in the standings.