Police say two juveniles were assaulted when an unknown number of suspects entered a home and fled in a red Dodge Avenger.

According to CSPD, the suspects entered a home in the 2800 block of Wyatt Street after 5 p.m. on April 4. The suspects assaulted two young juveniles and left the residence, when they were confronted by a neighbor.

One of the suspects fired shots at the neighbor and fled the scene in a red Dodge Avenger, police said.

Both juveniles were transported to a local hospital with non-life threatening injuries. Police said no one was actually struck by gunfire but a few homes and cars nearby were damaged.

An image of the vehicle was recovered through video surveillance, and has a dent in the right rear bumper. The investigation is ongoing. 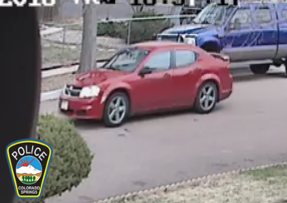