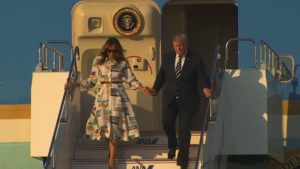 It’s the much-ballyhooed trophy that President Donald Trump plans to present to the winner of a championship sumo wrestling match in Tokyo on Sunday.

Trump arrived in Japan on Saturday on a state visit as the guest of Prime Minister Shinzo Abe, who is taking Trump to the sumo match on Sunday.

The president has said that he finds sumo to be “fascinating” and that the trophy will be U.S.-made.

Trump will also meet Japan’s new emperor on Monday, becoming the first head of state to do so.