Summary:  A pair of storms, moving through southern Colorado overnight tonight and overnight Monday night, coupled with a backdoor cold front…causing cold air and upslope flow along the I-25 corridor…adds up to several periods of snow and a lengthy storm…not due to wind down until Tuesday afternoon…and clear out Tuesday night. Is this “Snow-mageddon”? No. Not at all. It’s just a prolonged event, in two waves, that will impact the nights and mornings, most.

It will also be bitterly cold through the event, and that will not only affect your garb, but dramatically increases the snow “amounts” because dry, fluffy snow accumulates better than wet, heavy snow. But remember, with all my snow totals and talk, I am always referring to the entire total, through two entire days…ie for both waves.

Here is a timetable for start times of snow. Note they are at 10pm and Midnight tonite, so you can see the progression… 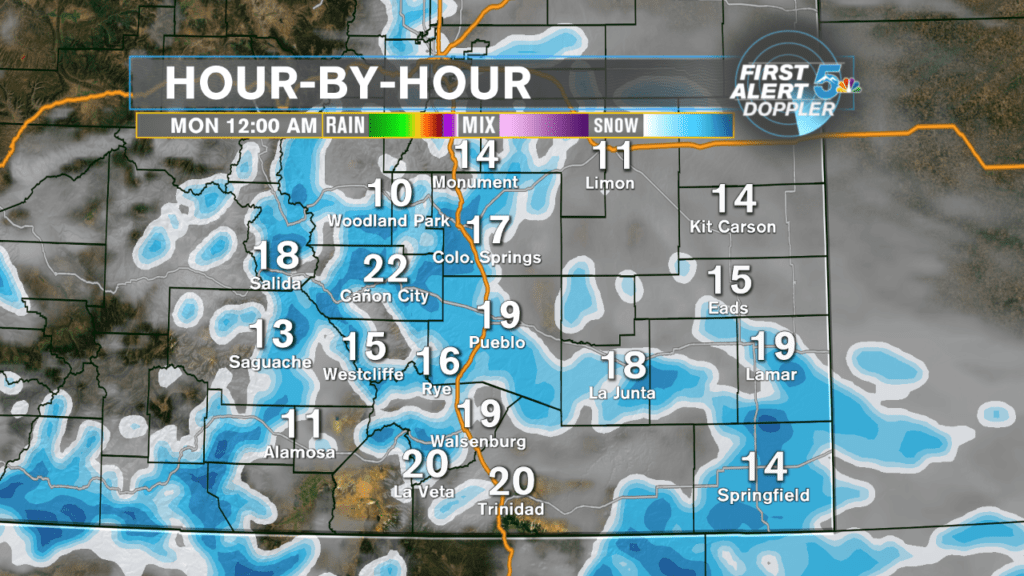 Snow begins either side of Midnight tonite, winds down not long after dawn Monday…to occasional flurries…and then picks up again Monday evening, winding down Tuesday morning, and completely ending afternoon and evening, across the News 5 area.

The bitter cold will gradually modify midweek, but expect glare-y roads from new snow cover for a few days!

When all is said and done, I would expect 2 day totals to look something like this:

CANON CITY: Low: 16, High: 38.  Snow after 10PM, and through the night. Intermittent flurries Monday, more snow in the evening.