Today’s Forecast:
Conditions are coming together for southern Colorado to see strong to severe weather this afternoon. Flash Flood Watches have been issued for all of the southern mountains and plains until 12am Tuesday morning. Strong morning sunshine has worked together with the humid air to make the atmosphere very unstable and energetic. This will work together with monsoon moisture and upper level energy to spark large thunderstorms later today and again tonight. Severe weather now looks much more likely across southern Colorado from the leading edge of the Front Range to the I-25 corridor and east into the plains. Flash flooding with damaging hail and wind remain the biggest storm risks this afternoon. Tonight storms may not be quite as strong, but heavy rain could lead to bouts of flash flooding and hail due to our elevation can’t be ruled out. 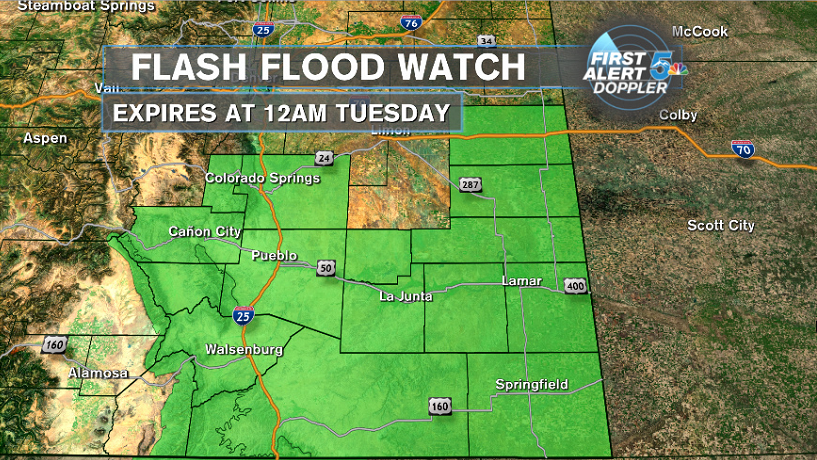 COLORADO SPRINGS: High – 79; Low – 58. Several back to back high resolution storm models show powerful thunderstorms pushing right over Colorado Springs this afternoon and then again tonight. The main wave of storms looks to arrive around 3pm today with a second round of heavy rain coming through sometime after 9pm. Storms have the best chance of being severe this afternoon with damaging hail, wind and flooding staying the primary concerns. Flooding will be a big concern tonight, but due to our high elevation large hail is still a possibility through the overnight hours.

PUEBLO: High – 84; Low – 63. Modeling is still very supportive of large storms crossing right through Pueblo today, just later than they will pass through Colorado Springs. Storm timing right now looks to be anytime after 5pm, with the worst storms hitting at 6pm. Damaging wind and hail will be the biggest risk, but isolated flooding could happen. A second round of storms is possible tonight, but the heaviest rain looks north of the city.

CANON CITY: High – 82; Low – 62. Canon City remains the toughest forecast in our area. Most high resolution modeling steers the bulk of the rain to the north and south sides of the city with very little actually moving right through town. Still, with how much energy and moisture we’ve built into the atmosphere, anyone living in the area should still plan on a pretty good chance for strong to even severe thunderstorms later today and tonight.

WOODLAND PARK: High – 69; Low – 49. Strong but possibly severe storms should be expected through Woodland Park later today and possibly again tonight. Model guidance has storms moving southeast through the city around 2pm today packing heavy rain, lightning and hail. Quarter size hail will be possible through the city with strong to severe wind gusts possible. Flooding along any fresh burn scars will be very likely, but flash flooding near the mountain slopes and low lying areas will also be a big concern, especially tonight when a second round of rain pushes through after 8pm.

TRI-LAKES: High – 70s; Low – 50s. Strong to severe storms look likely through the Tri Lakes area later today and then again tonight. The timing and storm risks should be very similar to Colorado Springs. Look for storms to push in anytime after 2:30 to 3pm with heavy rain, flooding, and hail as the primary risks. A second round of storms tonight could produce more hail and flooding.

PLAINS: High – 80s; Low – 60s. Very strong to severe storms are expected later today and tonight. Severe threats include a mix of heavy rain, flooding, and damaging wind and hail. Timing on storms to clear El Paso and Pueblo counties to the east will be generally after 6pm with storms slowly moving east well through midnight. A second round of storms could have lingering rain showers into tomorrow morning.

WALSENBURG/TRINIDAD: High – 80s; Low – 50s. Storms will arrive to the mountains west of Walsenburg and Trinidad late today, with most modeling pointing towards 4pm. Storms will slowly push east to both towns and the southern I-25 corridor and then east across Las Animas county and the plains north. Flooding will be the largest concern with storms, especially in the fresh Spring burn scar area. Large hail and damaging winds cannot be overlooked with storms, especially as the cross east of the mountains to a more unstable atmosphere.

WEEKEND OUTLOOK OR NEXT WEATHER MAKER:
Monsoon moisture stays locked in the forecast well through the weekend. Temperatures will stay at or below average due to the heavier cloud cover and rain well through Friday, certain days will see more rain than others.