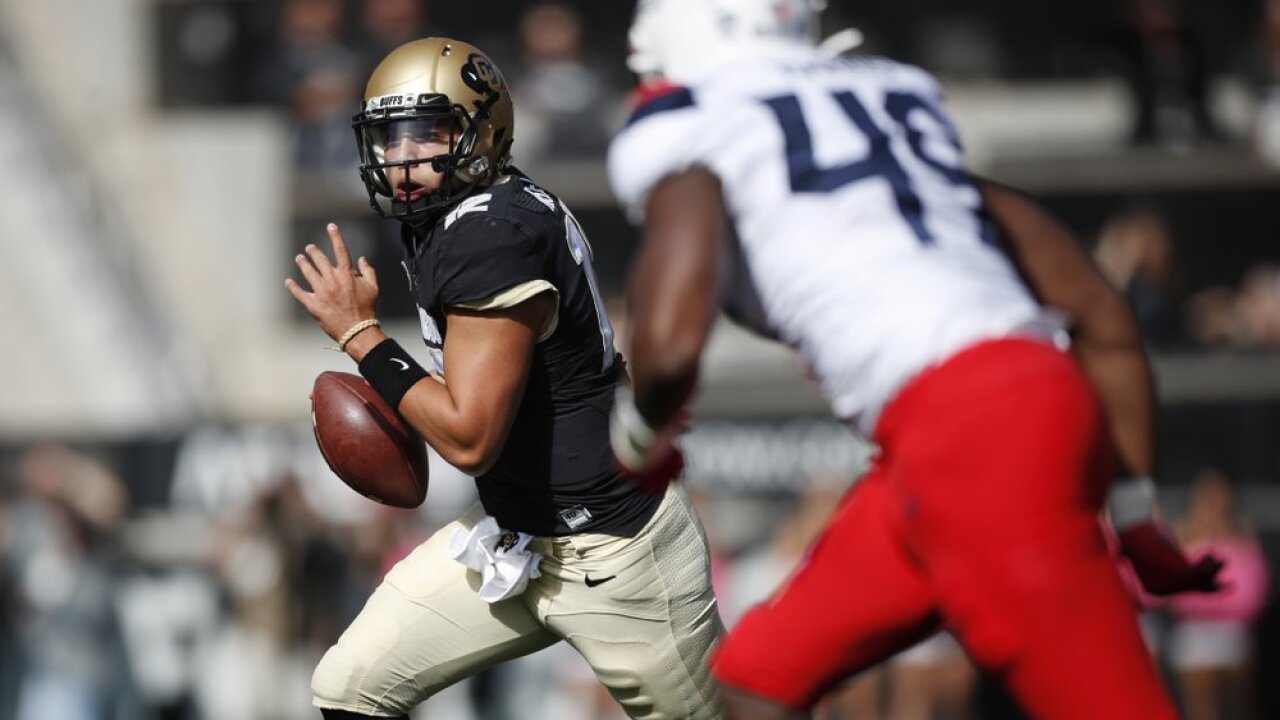 BOULDER, Colo. (AP) — Nobody would have flinched had Khalil Tate knelt and kissed the grass at Folsom Field.

“Colorado holds a special place in my heart,” Arizona’s senior dual-threat quarterback said after throwing for 404 yards and three touchdowns in the Wildcats’ 35-30 win over the banged-up Buffaloes.

It was here in Boulder two years ago that Tate burst through so many tackles and onto the college football scene by rushing for 327 yards, an FBS record for a QB, in leading Arizona to a 45-42 win in relief of injured starter Brandon Dawkins.

This time, he beat the Buffaloes with his arm, just like he did last year in Tucson, when he threw for five TDs in another shootout survival by the ’Cats.

This one also featured an amazing nine lead changes, back-to-back touchdown throws on drives that took all of nine and 10 seconds, a razzle-dazzle touchdown , and, finally, a pair of fourth-quarter stands by Arizona, one at the goal line and the other a fourth-down game-stopper at midfield.

Tate completed 31 of 41 passes and only ran four times, including a 7-yard scamper on third-and-6 from midfield in the closing minutes that allowed Arizona (4-1, 2-0) to run out the clock and leave Folsom Field as the Pac-12 South’s last unbeaten team.

“Next man up is not a cliche, it’s what’s required,” Colorado coach Mel Tucker said. “There’s really no excuse and no explanation” for the Buffs’ breakdowns with so many backups filling the field, he insisted.

The Wildcats weren’t whistled for a penalty until the final play of the third quarter — offside — during the Buffalos’ longest drive of the day, a 14-play marathon that stalled with Colorado failing to score on three plays from inside the Arizona 5.

They settled for James Stefanou’s 20-yard field goal and a 30-28 lead.

“That was the difference in the game,” Arizona coach Kevin Sumlin said.

The Buffaloes drove to midfield and converted a fourth down but on third-and-4 from the Arizona 46, quarterback Steven Montez didn’t recognize two open receivers on slant routes up the middle when the Wildcats blitzed two linebackers. Instead, he overthrew a receiver on a go-route down the right sideline.

That brought up fourth down and his throw to Dimitri Stanley was too high and Arizona took over with 2:23 remaining.

“To get a fourth-down stop, that’s the one everyone is going to point to,” Sumlin said.

Colorado took a 20-14 halftime lead after a wild second quarter that almost ended with a touchdown return on a squib kick.

On third-and-3 from the Arizona 12, Montez scrambled before finding tight end Brady Russell for the score with 3 seconds remaining.

“Initially, everybody was covered, so I just kind of figured I would scramble around,” said Montez, who knew he could throw it away if no one was open, sending the field goal unit out. But with no timeouts left, “all I needed to do was not take a sack,” Montez said.

“I avoided a couple of defensive linemen, saw Brady (Russell) sitting in the corner with his hands up” and delivered the TD strike.

The Buffaloes squibbed the kickoff and Jamarye Joiner scooped it up at his 10 and raced down the opponents’ sideline for an apparent touchdown only to turn around and realize he’d stepped out of bounds at the Colorado 46.

The Buffs went ahead 14-13 when Montez got the ball into the hands of tailback Jaren Mangham, who flipped it to a reversing Nixon, who threw a pinpoint pass to Dimitri Stanley for a 39-yard score.

Tate replied with a 75-yard TD toss to Peterson, who burned Onu, whose interception at midfield had set up Stanley’s touchdown. Onu appeared to get hurt on the play.

With Shenault and Nixon ailing, Tony Brown led Colorado with 10 catches for 141 yards.

The Buffaloes were whistled eight times for 85 yards in penalties and the Wildcats were flagged just once for 5 yards.