Rockies Nolan Arenado has no regrets about calling out GM, is 'ready to win' 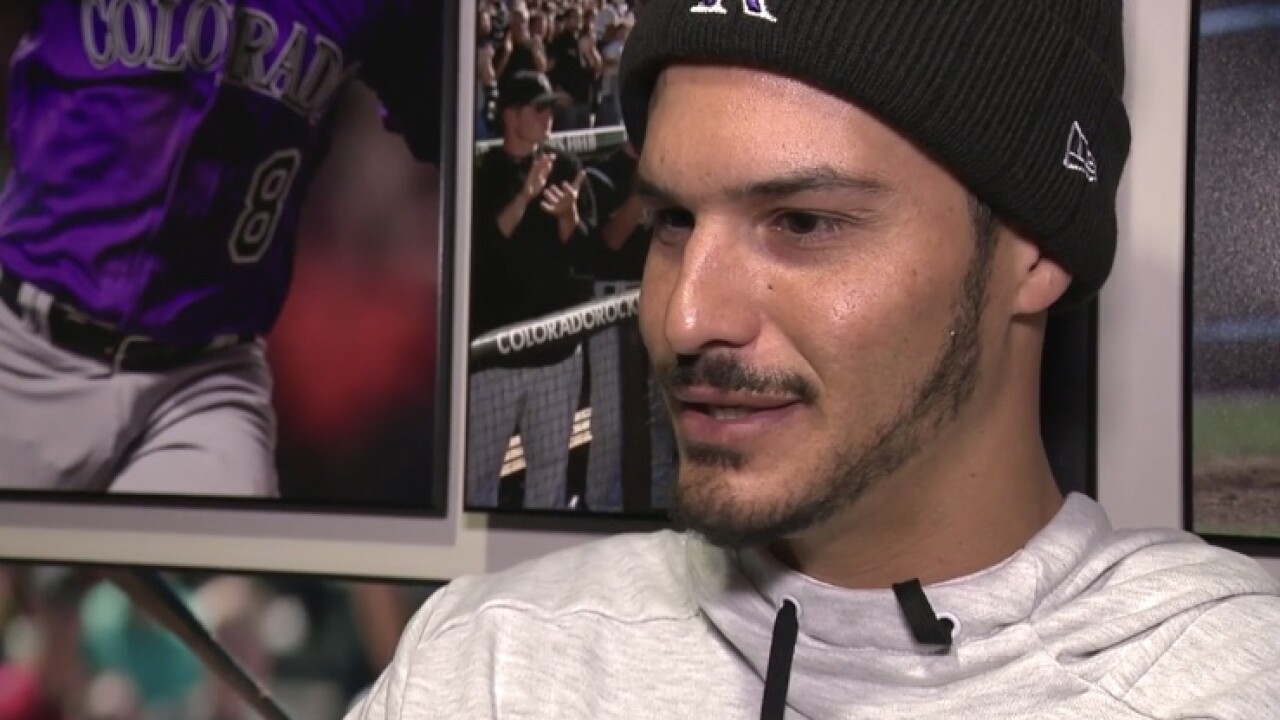 After spending the offseason feeling 'disrespected' by the general manager and disillusioned with the team's direction, Rockies third baseman Nolan Arenado reported to spring training Sunday with no regrets.

This much is certain. He remains a Rockie -- for now. And his relationship with Jeff Bridich is unchanged. Arenado said he need not apologize over calling out Bridich, who declined to discuss Arenado's situation earlier in the week.

"I stand by what I said. I’m not apologizing for what I said at all. I don’t feel I need to apologize for that. I said what I said," Arenado told reporters at Salt River Fields. "I mean, they say what they say sometimes, too. You know? So it is what it is.”

Arenado is loyal to his teammates. He communicated with several of them in the days leading up to spring training. They don't believe he will be a distraction -- Arenado felt badly that they had to answer questions about him -- and he insists he will not. Arenado has carved out a reputation for rolling up his sleeves and putting up Hall of Fame-worthy numbers despite the team's record, which sank to 71-91 last season after back-to-back playoff berths.

Arenado admitted he talked with team officials about their plans this offseason, but said he didn't go as far as requesting a trade. He knew it was possible, so he was not bothered by those rumors, which have most notably connected him to the Cubs for Kris Bryant and the Cardinals for a battery of pitchers. A disconnect developed late last season seven months after he signed an eight-year, $260-million contract. A seven-time Gold Glove winner -- he has finished in the top 8 in the National League MVP voting the past five seasons -- Arenado was asked if his relationship with the organization can be repaired?

“Yeah, I think at the end of the day it’s about performance and it’s about going out there and winning games. I don’t hold grudges; that’s not really me. I’m not trying to hold grudges against anybody. But I also have to be who I am and stand up for what I believe in," Arenado said. "I’m not going to change a whole lot.”

The sides see this situation differently. The organization is disappointed in Arenado's criticism after they ponied up for the new deal. And they have asked him to be more of a leader in the clubhouse.

Arenado, 28, has never been vocal, but his play is more consistent than a metronome. There's a sense from the club, in my opinion, that Arenado should feel grateful for his contract. However, the Rockies qualified the deal by putting in a clause allowing Arenado to opt out after the 2021 season, undermining their commitment whether it was intended or not. The reality is Arenado would have received his money from any number of suitors either after a trade or as a free agent. He believed upon signing -- and that came through again Sunday -- that the team was going to make moves to be an annual contender. This offseason the Rockies were the only team not to sign a free agent to a major league contract.

It's unfair to say the Rockies don't spend money. Their payroll sits at $145 million, per spotrac. The problem is that high profile free agents have not panned out -- all signed by Bridich -- among them relievers Wade Davis, Bryan Shaw, and Jake McGee, outfielder Ian Desmond and first baseman Daniel Murphy. It left the Rockies unwilling to spend this past winter -- though it can be argued they would have been better suited to eating money on existing deals to facilitate trades, thus creating addition by subtraction.

As such, the Rockies are left counting on several players to rebound.

"I do have confidence in the guys we have here. We have to take a big leap this year. A lot of teams in our division got way better. That’s going to be tough. When you see the year we had last year, as a fan of the game, as someone who cares about winning you would think that some moves would be made but obviously they were not. They believe in bounce back. I believe in the guys we have also. I believe they can bounce back," Arenado said. "We need to make a big move (early in the season).”

Arenado has attracted the spotlight since his rookie year. However, he's never been under this type of media glare because of his opinion. He made clear Sunday that he remains focused on his job even as his future remains uncertain.

"I'm ready to go. I'm going to compete," Arenado said. "I know a lot of things have been swirling around. Nothing has changed with me. I’m going to do the best I can. And I’m going to work hard and help this team win,“ Arenado said. "I think the fans appreciate that. They appreciate that I try to go out there every day, help this team win. I know their feelings about losing and it’s not fun. And I know that nobody’s happy about it, and I’m with them. So I know that they want to win and I do too.”