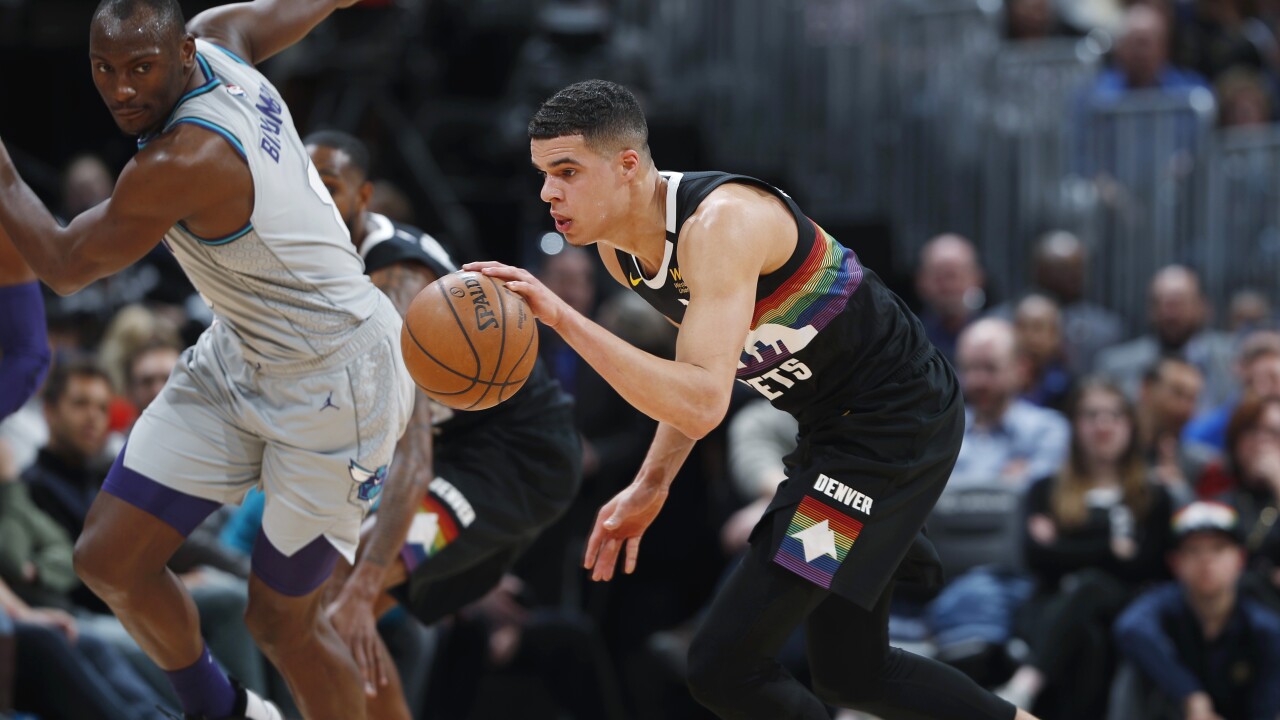 Murray exited the game with 1:32 remaining in the second quarter after rolling his left ankle. He was helped off the floor by teammates. The banged-up Nuggets were already without Gary Harris (groin) and Paul Millsap (bruised left knee).

Dozier finished with 12 points in 13 minutes, including a stretch in the second half where he scored nine straight for the Nuggets. He was recalled from Windy City of the G League on Tuesday to provide depth. Dozier averaged 20.9 points and 7.7 assists in 16 games for the Bulls. He's been called up before, but never appeared in a game for Denver.

Before the contest was even over, Murray posted on his Twitter account about Dozier: “All I’m sayin is y’all better be ready to see my boy Dozier_Kid shine. ... dat boy can hoop!!”

Porter carried the Nuggets for a stretch as he erupted for 11 of his points in the second quarter.

Terry Rozier scored 20 points for the Hornets, who wrapped up a winless four-game trip.

Denver led by as many as 20 points in the third quarter before the Hornets closed on a 21-6 run. Bolstered by Dozier, the Nuggets steadily built the lead back up to a comfortable margin.

The Nuggets were rightfully fearful of a Hornets team that's 15-29. Denver has struggled against teams under .500 all season.

“We're not looking at records,” Nuggets coach Michael Malone said. "We have to go out and play our game.”

Murray was hurt when he tried to contest a 3-point shot by Rozier and appeared to land on Rozier's foot. Murray instantly grabbed at his ankle as play was stopped. Murray had five points and one assist before exiting. He was also dealing with a sore back.

It was a family reunion for brothers Willy and Juancho Hernangomez. Juancho scored no points in 17:50 for Denver, while his older brother had five points in 11:08 minutes for Charlotte.

Hornets: Coach James Borrego picked up a technical foul late in the first quarter. Rozier and Miles Bridges were given technicals on the same play with 5:43 remaining.

Nuggets: Denver is 11-1 this season when holding teams under 100 points. ... Nikola Jokic had 12 points, eight rebounds and eight assists.

If Malone was casting a vote for most improved player at the halfway point of the season, he would strongly consider Charlotte guard Devonte' Graham. The guard out of Kansas entered averaging 18.8 points this season. He averaged 4.7 points a year ago. He's also made the second-most 3-pointers in the league this season, behind only James Harden.

"Devonte' is playing at such a high level," Malone said.

Malone denied a report that he's agreed to become a consultant for the Serbian national team.

"That's not accurate," Malone said before the game.

The Nuggets had a colorful array of sneakers on the floor at one point, with Malik Beasley wearing purple, Hernangomez neon yellow and Mason Plumlee red.

Nuggets: At Golden State on Thursday. Denver is 4-2 this season on the second night of a back-to-back.
___